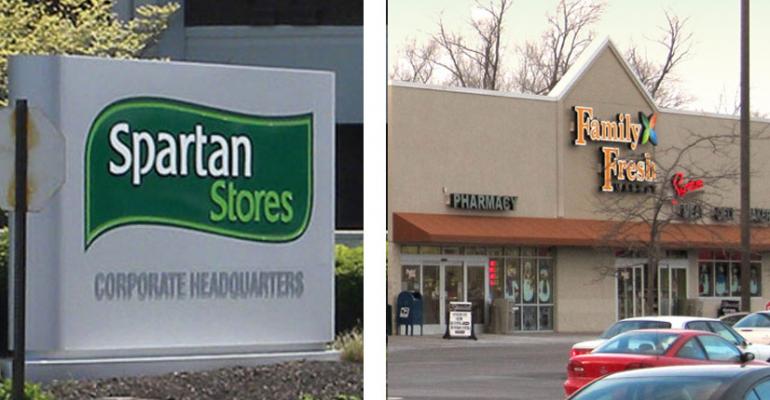 MINNEAPOLIS — Customers of Nash Finch here anticipate stronger retail programs when the merger with Spartan Stores is completed later this year, they told SN in a series of interviews.

However, the long-term fate of the wholesaler’s Our Family private-label line is still not clear, they noted. Spartan distributes private brands from Topco, as well as its own Spartan-brand lines.

Dan Shanahan, chief operating officer for Buehler’s Fresh Foods, a 14-store chain based in Wooster, Ohio, said he hasn’t been told if a decision has been made on whether the combined wholesaler will continue to distribute the Our Family line. “It’s still too early to know,” he said, “and I don’t think they’ve determined all the tactical consequences.

“But which private brand we carry is not that important, as long as any transition is handled correctly from the consumers’ standpoint. I’ve been involved with a change in private-label brands before — when I was at Wilson Farms [a convenience store chain] — and the synergies of offering one private label probably outweigh offering multiple private labels.”

Another Ohio retailer also said a change in labels would be feasible. “We’ve spent a number of years working with Our Family, and we’ve got a lot of equity built into it, but I believe private label tends to be driven primarily by price, though quality is also very critical, so if the price is right, people will try it — and the Topco private label is very good.”

A Nash Finch customer in North Dakota offered a different viewpoint, saying, “I don’t think the combined company would be silly enough to give up carrying Our Family. That label has been available in the Midwest for 128 years and in parts of the Southeast for 20 years, so it’s well established and many consumers see it as a national brand.”

When the definitive agreement to merge was announced last month, Dennis Eidson, president and chief executive officer of Spartan, said the issue had not been resolved yet.

“Both companies have a strong private-brands platform. In some parts of the U.S., the Our Family brand is the leading private brand in the marketplace, and it really resonates with the independent customers and the end consumer. And Nash Finch has worked extremely hard in the past 18 months to really make that program even stronger.

“Nash Brothers Trading is another brand they have that is performing well, and they also have retailers that support the IGA and Piggly Wiggly brands, and we see those all staying in place.

“Spartan also has a very strong private-brands program, and we’d like to leverage both organizations’ expertise on private brands.”

Several operators told SN they anticipate improvements in some retail programs once the wholesalers merge.

“We find Nash Finch to be very responsive and to react very quickly when we ask them for help with a particular issue,” Shanahan said. “But there are some areas where Nash Finch is average and Spartan is very strong. From talking with colleagues, I know Spartan has good store operations and good store design programs, for example.”

Another Ohio retailer said he currently buys from a third-party produce wholesaler because Nash Finch has only limited produce at some of its distribution centers, “but Spartan has indicated it will distribute produce at more facilities, so that’s something we look forward to,” he noted.

One Minnesota-based Nash Finch customer said he is interested in getting better wholesale support for some perishables categories. “From what I’ve heard, Spartan gets more in-depth on deli and bakery — an area where Nash Finch has been weak,” he explained.

One retailer said he expects the merger will increase the company’s buying power, “which we hope results in a lower cost-of-goods, particularly in HBA and private label.”

He said Nash Finch has sent personnel from its DCs to talk to retailers, “asking us to take a wait-and-see approach, telling us this will be a positive thing and asking us not to plan on moving too quickly.”