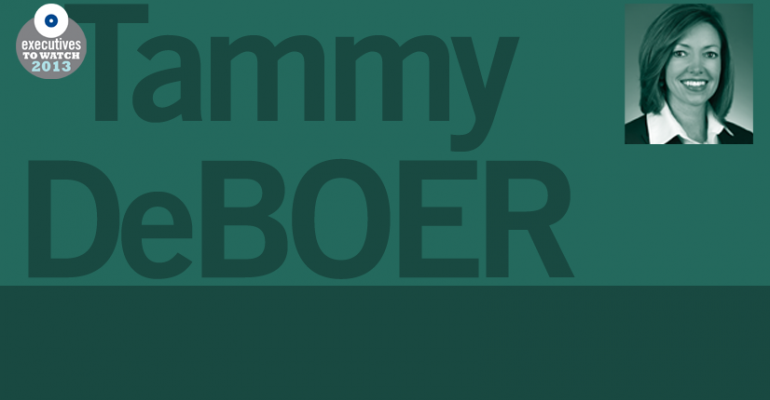 &ldquo;I believe what I bring is an intense focus on making sure that all of our efforts are customer-centric, with regard to assortment, pricing, marketing and merchandising programs.&quot; &mdash; Tammy DeBoer, SVP of food merchandising, Familiy Dollar

MATTHEWS, N.C. — Along with an increasing array of refrigerated, frozen and grocery offerings, Family Dollar Stores has another new weapon in its strategy to compete with traditional supermarkets — Delhaize America veteran Tammy DeBoer, who was recently promoted to senior vice president of food merchandising.

DeBoer, who spent much of her career at Delhaize’s Food Lion banner and ran that chain’s more upscale sister chain, Bloom, for three years, before joining Family Dollar last year, is helping drive an ongoing effort to expand consumable sales at the dollar store chain.

With a diverse range of experience in a variety of category management and operations posts, DeBoer brings a broad set of skills to her new post.

“I believe what I bring is an intense focus on making sure that all of our efforts are customer-centric, with regard to assortment, pricing, marketing and merchandising programs, and making sure that everything we do is centered around providing profitable and sustainable sales growth,” she told SN in an interview last week.

“A huge enabler for me in order to bring that to life is to bring strong supplier partnerships that include long-range planning focused on all of these key metrics.”

DeBoer, who began her career in customer service at Food Lion, developed an interest in the supplier relationship side of the business early on, and became a buyer, working her way up through buying and category management positions before learning operations.

She had been a regional vice president of operations for Food Lion, overseeing some 235 stores generating $2.5 billion in annual sales, when she was named vice president and general manager of its Bloom division in 2008.

She left Bloom — an experimental format based on leveraging the latest in customer-facing technologies and new merchandising schemes — in June 2011, and Food Lion has since abandoned the Bloom banner amid a major overhaul of its operations.

DeBoer joined Family Dollar in June of last year as vice president of private label, an area of particular focus at the dollar store operator.

Family Dollar has been expanding its private-brand offerings — adding more than 1,000 SKUs in the last two years, many of those in food categories — and is working on consolidating its portfolio of private labels. It currently has 24 separate labels across the store’s range of offerings.

“We are working very diligently with our private-brands suppliers to build strong partnerships, and really work to ensure that we are getting the absolute best quality for our customers at a great value,” DeBoer told SN. “Customers are recognizing that our private-brand items are now national-brand equivalent, and we’re seeing a great conversion rate from national brands to private brands in many categories, and certainly that is very helpful as one of our profit initiatives.”

The company is also focused on innovation in private brands, she said, noting that the company still feels it has great opportunity to expand its range of private-label food products.

Private label is a part of Family Dollar’s comprehensive effort to expand its food offerings. It has been rolling out coolers and expanding its cooler space at a rapid pace, and frozen and refrigerated foods have been among the company’s best-performing categories. Family Dollar has been doubling its cooler capacity — to 10 doors from five previously — in remodeled stores, and is opening new stores with 10 to 18 cooler doors.

Last year the company inked a six-year supply agreement with McLane Cos., a major supplier of grocery product and cigarettes to convenience stores, and also added Pepsi products and an expanded tobacco-products offering.

“With McLane being the largest tobacco and food wholesaler in the country, it allows us to provide the tobacco assortment that is needed in our stores as well as an expanded food assortment,” DeBoer said. “Specifically in our dairy and frozen assortment, we’ve been able to go in and pick from their portfolio of over 40,000 SKUs to make sure that we are offering the most relevant and meaningful assortment to our customers.”

The agreement with McLane will also facilitate more regionalization and clustering of the company’s food offering, she explained.

Family Dollar currently distributes some grocery product through its extensive network of distribution centers, but does not self-distribute any perishables.

“Providing customers with a compelling food assortment is key to driving trips and an important initiative for Family Dollar,” Paul White, executive vice president and chief merchandising officer, Family Dollar, was quoted as saying at the time of DeBoer’s recent promotion.

The biggest challenge, DeBoer explained, is always balancing the mix of offerings with high- and low-margin items, while maintaining the chain’s competitive pricing — a skill DeBoer honed in her years at Food Lion.

“It is very competitive in terms of price positioning, and we are very focused on keeping low prices on the products that matter the most to our customers,” she said.

While DeBoer’s skills learned from the supermarket industry are certainly boosting Family Dollar’s efforts around consumables, DeBoer explained that there are some key differences between the way customers shop the two channels.

Family Dollar shoppers make more frequent trips and buy smaller baskets, she noted, and tend to do more fill-in shopping rather than stock-ups.

“While she may be there just to buy a 2-liter soft drink, she also will browse over the discretionary categories, and will look over apparel and home goods,” DeBoer said of the typical Family Dollar shopper. “So, she browses a bit more, and doesn’t necessarily come with a list, like we are used to in the supermarket industry.”

One person familiar with DeBoer’s work at Family Dollar, who asked not to be identified, said that DeBoer “has all the tools of a very good executive,” noting that she brought a “collaborative approach” to her job at the chain.

In addition to her work at Food Lion and Bloom, DeBoer also worked for a time as vice president of merchandising, marketing and advertising for the retail division of Minneapolis, Minn.-based Nash Finch Co. from 2002 to 2005.

She returned to Food Lion in 2005, where she had begun her career and worked 13 years previously, rising to the position of vice president of dry merchandising.

DeBoer has also been involved in industry activities, and co-chaired the Network of Executive Women in the Carolinas.

The average transaction is about $10, and in 2012 the chain saw increases in both customer visits and in average ticket. About 28% of its SKUs are priced at $1 or less.