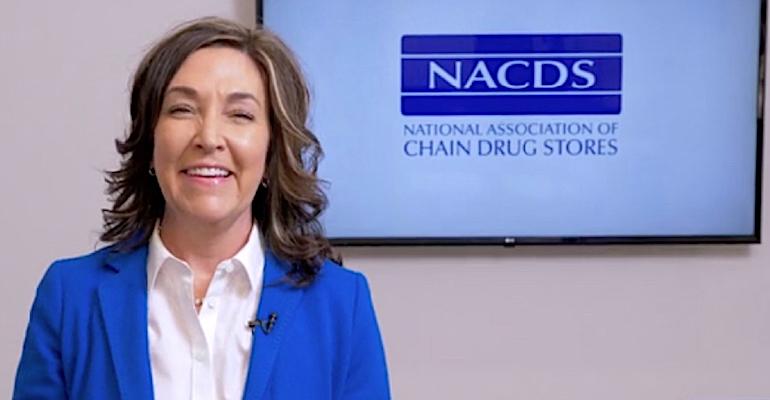 Related: Supermarket pharmacies do their part in COVID-19 vaccination push

Lindholz, who leads the health care services arm of The Kroger Co., accepted the chairman’s gavel today from Keyes, who completed his one-year term, at the NACDS Annual Meeting, which runs April 26 to 28. New NACDS officers and board members also were announced during the virtual event.

Speaking at the meeting's Business Program on Tuesday, Lindholz pointed to the chain drug industry’s response to the COVID-19 crisis, led by its efforts to boost access to coronavirus testing and vaccines.

“When you think about the force that is our NACDS membership group, there is a unique power when we share our story together. It is when we are united that we can make the statement: ‘There is a pharmacy located within five miles of 90% of Americans.’ When we work together, that story is true and that story is told. There are things we can do together that we can’t do separately,” Lindholz said.

“Throughout this crisis, the government has demanded it. They have wanted to know what our industry can do to provide frictionless, collaborative solutions to help solve the pandemic. They have seen the power of pharmacy,” she noted, adding, “Those who know me know I’ve always said that it would be our nation’s pharmacists who would step up to serve our country’s health care needs when we’ve needed it most. And together, you’ve all leaped forward with passion, grace and resolve.” 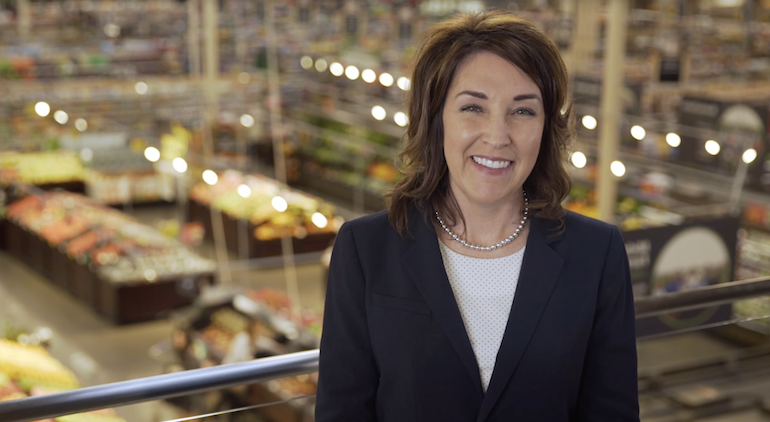 At Kroger Health, Lindholz has been lead architect of the 'Food as Medicine' strategy to connect customers’ grocery experience with their health care needs.

Previously, Lindholz served as vice chairman and treasurer of Arlington, Va.-based NACDS. Lindholz assumed those roles last June after she and Keyes were elevated upon the departure of then-NACDS Chairman and Walgreens President Richard Ashworth, who left the drug chain to join another company.

In her speech, Lindholz also explained how pharmacists and their teams were “empowered to do even more during the pandemic: more testing, more vaccinations, more strategies to help patients stay on their medications,” as well as how retailers and suppliers have embraced a “total-store approach” in serving customers, communities and employees.

She also cited pharmacies’ collaborative approaches to health care delivery and access, notably pharmacist-physician collaborations that occurred during the pandemic, as well as the “success of collaborative models involving doctors, nurses, pharmacists, dietitians and others” in addressing issues such as diabetes, substance abuse and preventive care.

“I welcome this opportunity to serve as a passionate ambassador for your company and my company, for the strength of chains and suppliers united in this association and for the untapped potential for the American people that exists in a true partnership among all of us,” Lindholz said.

As president of Kroger Health, Lindholz leads a team of more than 22,000 health care practitioners — ranging from pharmacists and nurse practitioners to dietitians and technicians — at over 2,200 pharmacies and 220 clinics in 37 states, which provide health and wellness solutions to 14 million-plus customers annually. She’s also the lead architect of the Kroger Health’s “Food as Medicine” strategy to connect customers’ grocery experience with their health care needs via partnerships, services and technology.

Lindholz joined Kroger as a pharmacist in the company’s Cincinnati division in 1995. Thereafter, she served in various pharmacy roles within the division — including manager, coordinator, sales promoter, recruiter and merchandiser — before being promoted to director of pharmacy sales and marketing at Kroger’s Cincinnati headquarters in 2013. Lindholz was appointed president and CEO of The Little Clinic in April 2015 and then, two years later, she was promoted to her current role as the first president of the newly formed Kroger Health organization.

During the Business Program, Lindholz noted Keyes' contributions during his tenure as NACDS chairman. “I know I speak for the entire industry when I say we truly admire the dedication that Rick brought to the work of Meijer and the work of NACDS over this past year," she said. "He has been a strong voice for the role of retailers and suppliers in confronting this pandemic, and most importantly, he’s been a tireless advocate of the partnership approach that makes us all stronger.”