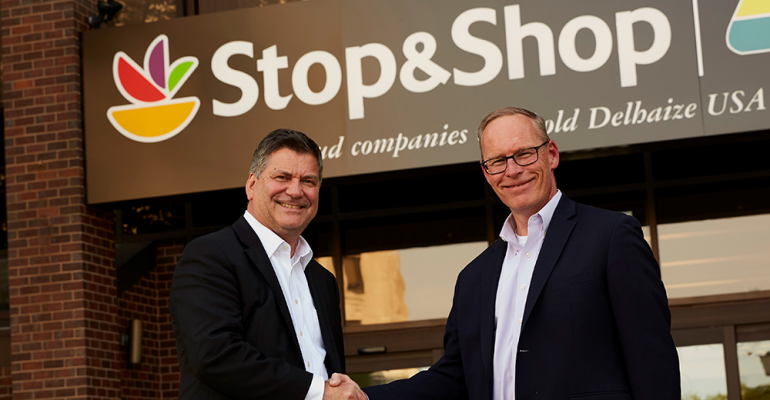 Stop & Shop to get new president

Ahold Delhaize USA has named Gordon Reid as president of its Stop & Shop supermarket chain, taking the role vacated by Mark McGowan, who is leaving the company.

Announcing the change late Monday, Ahold Delhaize said Reid, currently president of Landover, Md.-based Giant Food, will start transitioning to his new role in the coming weeks and take the reins at Stop & Shop in late July. Plans call for McGowan to remain with Stop & Shop through the end of the year to help with the leadership transition at the Quincy, Mass.-based chain, which operates about 410 stores in the Northeast.

Ira Kress, senior vice president of operations for Giant Food, has been named interim president of the grocery chain. He is slated to begin in the role in late July.

“Mark McGowan has had a tremendous impact for the Ahold Delhaize USA brands, as well as the communities they serve, and we thank him for his 30 years of tireless service,” Kevin Holt, CEO of Ahold Delhaize USA, said in a statement. “Under his leadership, Stop & Shop has built a strong foundation for transformation and expanded success that continues through our ‘Reimagine Stop & Shop’ initiative. As Mark transitions, I have full confidence that Gordon Reid is the right leader to continue this transformation by repositioning the business for future success and rebuilding customer loyalty.”

“It’s been an honor and privilege to lead the Stop & Shop brand. I’m grateful for our associates who are incredibly dedicated to serving our customers every day, and I’m extremely proud of all that we have accomplished together,” McGowan said. “As Stop & Shop embarks on the next phase of its transformation, now is the right time for me to make this change. I look forward to working closely with Gordon and the entire team to ensure a seamless transition.”

Reid has been president of Giant Food since joining the 165-store, Washington, D.C.-area chain in late 2013. He had more than 35 years of international retail experience, including various management roles at Tesco, Boots, A.S. Watson Group and The Dairy Farm Group.

“We are excited for Gordon to join the Stop & Shop brand,” said Holt. “Gordon is an excellent leader of people, with a strong focus on serving customers, engaging associates and supporting local communities. During his time at Giant Food, the brand has successfully grown sales and market share, and has strong associate engagement results.”

Part of Zaandam, Netherlands based Ahold Delhaize, Ahold Delhaize USA operates about 2,000 stores in 23 states and the District of Columbia. Besides Stop & Shop and Giant, its retail banners include Food Lion, Hannaford, Giant Food Stores and Martin’s Super Markets, as well as online grocer Peapod.

Stop & Shop is Ahold Delhaize’s largest supermarket chain. The retailer last October kicked off a five-year plan to roll out a new look and shopping experience at its stores in Massachusetts, Connecticut, Rhode Island, New York and New Jersey. That effort began at 21 stores in the Hartford, Conn., area. The brand repositioning includes a modernized store format and a new logo that reflect a more customer-centric strategy based on convenience, particularly a wider array of fresh, fast, healthy and local food options.

Ahold Delhaize said the brand refresh at Stop & Shop is expected to lift store sales 4% to 6% on a pro forma basis in the first year, 2% to 4% in the second and 2% in the third. Plans call for 60 to 80 stores to be upgraded annually under the program, with total capital spending estimated at $1.6 billion to $2 billion. Stop & Shop stores on Long Island, N.Y., are next in line for the program, starting this spring.