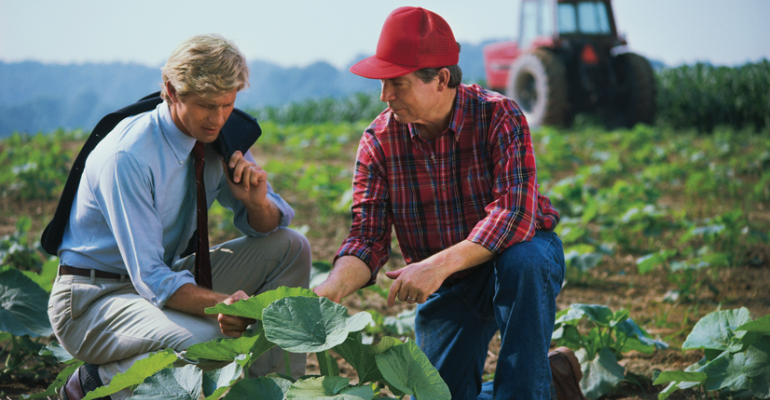 Two recent developments in Washington promise to have a major impact on the fresh food industry in 2013.

The Food and Drug Administration released two long-delayed rules for produce growers and processors as part of the Food Safety Modernization Act, an action industry sources applauded while remaining cautious about the specifics of the proposed requirements.

As dictated in the original FSMA legislation, small and very small businesses — designations based on total sales and to whom products are sold — are exempt from certain requirements under both regulations.

Additionally, the 11th-hour deal that avoided the “fiscal cliff” also included an extension of the 2008 Farm Bill, which addressed some worries of the dairy industry but left most groups frustrated by the lack of a new bill.

After languishing in the White House Office of Management and Budget since fall 2011, the new FSMA regulations are the first steps toward shifting the FDA’s focus from reacting to outbreaks to protecting against potential foodborne illnesses.

“No strategy can achieve a zero risk food supply but our strategy is grounded in the conviction that we can better protect consumers and the economic vigor of the food system if everyone involved implements reasonably available and scientifically sound measures to reduce risk,” FDA Commissioner Margaret Hamburg said in a recent media briefing.

The first FSMA proposal relates to produce safety at the farm level. It covers five areas where contamination could occur: worker hygiene; water; biological soil additions, such as manure or compost; animals in the fields and packing houses.

The second, a rule on hazard analysis and risk-based prevention, calls on most processors to implement Hazard Analysis and Critical Control Points plans, a standard that is already used for juices, seafood, meat and poultry.

The proposed regulations aimed to address certain industry concerns regarding flexibility, ease of adoptability for all those covered, and unique rules for specific crops, rather than blanket mandates.

“We’ve worked very hard to try to make these proposed rules as flexible and adaptable but appropriate as possible. And not to do a lot of things simply because they might be done but to do the things that will really matter to protect the health of the public,” said Hamburg.

In addition, certain crops will not be subject to all the requirements of the produce safety rule. For example, potatoes and artichokes, which are normally not consumed raw, won’t have to undergo the stringent measures, said Michael Taylor, the FDA’s deputy commissioner for foods and veterinary  medicine.

“We’ve said all along that we do not want regulation that is ‘one size fits all.’ That will never work across the diversity of the agricultural system, the produce sector of the ag system,” Taylor said.

Industry groups were hesitant to immediately assess the FSMA regulations.

“So our first goal is to really understand the rules, get that information out to members and touch off a dialogue about what’s right and what’s wrong in the rules and get that back to FDA within the comment period,” Tom O’Brien, the Produce Marketing Association’s Washington lobbyist, told SN.

As part of its proposed rules, the FDA included a cost-benefit analysis. It is estimated the average annual cost for a small farm will be about $13,000 and for a large farm, about $30,500.

Among growers and processors, there is “certainly concern out there over the cost,” but the industry should look at the bigger picture, said Mike Rozembajgier, vice president of recalls at Stericycle ExpertRECALL, which advises food companies on recalls and  regulatory compliance.

SN Poll: Will the new rules reduce the number of foodborne illnesses?

“While concerns of produce growers are warranted, the benefit of preventing an estimated — with the latest numbers I’ve seen — 1.75 million foodborne illnesses annually could certainly outweigh those costs,” said Rozembajgier.

One in six people are sickened by a foodborne illness each year, 128,000 are hospitalized, and there are 3,000 deaths, according to the Centers for Disease Control.

O’Brien also stressed that the new FSMA rules mirrored procedures that some companies already had in place.

“Food safety is not new to the produce industry, however. And I think that becomes important as you evaluate cost. I mean, a number of the activities that might be required for the first time in regulation are already commonplace in the industry,” said O’Brien.

The FDA has allowed 120 days for public comment on the rules, after which it will make changes and present a final version. It will likely be at least a year before the proposed regulations are finalized, said Taylor.

Meanwhile, industry sources expressed relief that the previous Congress was able to pass an extension of the 2008 Farm Bill, particularly as it avoided the so-called “dairy cliff” that would have led to significant price increases for consumers. Yet, the lack of a new, complete bill was cause for concern.

For milk-buying consumers, the Farm Bill extension was a good thing.

“There would not be any increase in prices to consumers, that’s for sure,” said Robert Cropp, professor emeritus at the University of Wisconsin-Madison and a dairy market specialist.

The extension also means business as usual for retailers and producers.

“Consumers, retail stores, everybody through the dairy supply chain down to farmers will find that there’s  really no difference today than there would have been, say, a few weeks ago,” said Mark Stephenson, director of the Center for Dairy Profitability at the University of Wisconsin-Madison.

The problem lies in the uncertainty of what happens after the Farm Bill extension expires on Sept. 30.

“I think the unfortunate thing is that it is relatively short term,” said Stephenson.

If a new Farm Bill is passed in 2013, it could mean big changes for the dairy industry. Provisions to change the existing price supports in the failed 2012 version of the legislation were very much opposed by dairy processors, and producers’ opinions were split, Stephenson said.

The bill would have eliminated the current Milk Income Loss Contract and the Dairy Product Price Support Program and introduced two new programs. The first was a margin insurance program, with government-subsidized premiums, that would have protected farmers when feed costs got too high in relation to milk prices.

Farmers that chose to take the insurance would then be subject to the Dairy Market Stabilization Program, also called supply management, that would force them to cut back on production if the price of milk dropped below a certain point.

The National Federation of Milk Producers, a dairy lobbying group, was the biggest supporter of this second provision, while many other dairy groups petitioned against it.

Though margin insurance would carry a small cost for taxpayers, the DMSP could have a much wider impact.

“If the supply management would go in, well that would restrict supply at certain times, which would mean higher prices to consumers,” said Cropp.

Cropp said it seemed  likely some sort of margin insurance would make it into the 2013 bill but probably not the DMSP, because of its controversy.

Those in the produce industry voiced mixed opinions about the Farm Bill  extension.

“It’s relief, but it’s also disappointment. Because we had crafted what we thought was a good 2012 Farm Bill, for produce at least, and now we’re going to have to go back with a new Congress and a new bill in a new environment where who knows what kind of budgetary concerns everybody’s going to have and try to get that bill back on track,” said Ray Gilmer, the United Fresh Produce Association’s vice president of issues management and communications.

The fear is that the produce industry will not be able to hold on to the funding deals it reached in 2012 as the new Congress looks to keep spending low.

“But that’s the challenge, because everybody’s going to be looking to cut money. Produce is a sliver compared to the spending that is in the Farm Bill. But everybody, I’m sure everybody is going to be watching very carefully where those dollars are spent,” said Gilmer.

Overall, consumers are unlikely to see any effect on produce from the Farm Bill extension.

“There’s some hiccups in terms of the production and research side, but for consumers, we don’t think there will be any significant impact,” said Gilmer.

Perhaps surprisingly, Supplemental Nutrition Assistance Program benefits, commonly called food stamps — a contentious part of Farm Bill negotiations in 2012 — remain largely intact in the extension, except for a small decrease in funding for employment and training programs and a $103 million cut to an education program focused on nutrition and obesity.