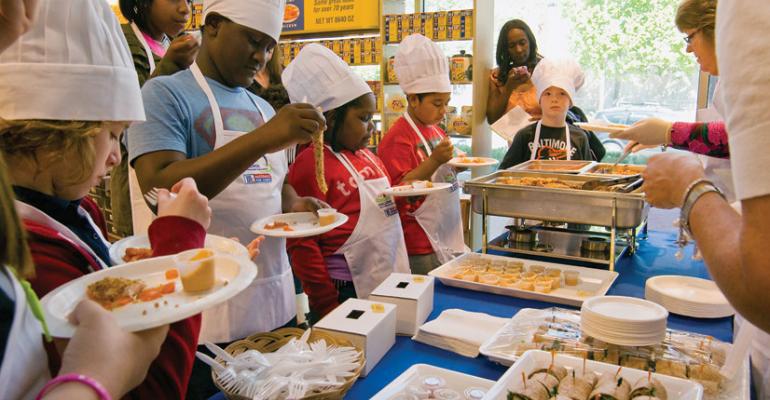 “The industry as a whole has been creating more healthful [kids’ menu] options and more diversity,” said Joy Dubost, director of nutrition at the National Restaurant Association, and a registered dietitian.

While the restaurant industry supports more healthful menu options for children, its biggest obstacle may be the people who demanded the changes — parents.

“Sometimes we get what we want and it makes us angry,” said Amy Myrdal Miller, senior director for programs and culinary nutrition at the Culinary Institute of America.

Even though dining out has become a routine part of American life, Miller said many still regard it as a time to indulge.

“We say one thing but we get these occasion-specific desires,” said Miller.

“Operators don’t make the majority of their revenue on kids’ menus,” she said. “People always say they want healthy items but they act in a more aspirational way than in what they actually do.”

Webster said that developing more healthful kids’ menu options can be expensive in terms of time, tools and retraining staff. Operators are more likely to concentrate this on the higher-revenue-generating adult menu.

She said kids’ menus have remained relatively unchanged in the last five years, with the top items still being grilled cheese and chicken strips. Instead of adding a new menu item, Webster said restaurants are more likely to make a minor change like offering a hamburger combo with fruit instead of fries.

However, Dubost has been seeing restaurants have success with more healthful options for children.

“There may be times when kids want something less healthy … but the [menu] items that have been added are doing just fine and are very competitive,” she said.

Changes in culture and tradition may be slow but progress is being made.

From fast-food to more upscale dining, children are picking from a wider variety of healthy options. Operators are adding more fruits and vegetables to recipes. While a child may still crave mac and cheese, it’s now made with whole wheat macaroni. There are now grilled chicken nuggets instead of fried, and lower-in-fat smoothies along with the ice cream treats.

To participate, member restaurants voluntarily add options to their kids’ menus that focus on increasing the consumption of fruits, vegetables, whole grains and lean proteins. An independent vendor, Healthy Dining, confirms the criteria are met.

The Kids LiveWell program is now in all 50 states with approximately 41,000 restaurant locations participating, said Dubost.

Miller said restaurants are also resorting to what she called the “stealth approach” to getting kids and their parents to eat more healthfully.

Instead of using the “h” word, operators are reducing sodium in food without letting consumers know they’re doing it. On the menu, dishes are described, not in terms of how good an ingredient might be for you, but how good it is in flavor, texture and how it’s prepared.

There is also the use of foods that Miller said have a “health halo.” Foods sporting this halo include whole grains, organics, gluten-free, chicken, salmon, kale, Greek yogurt and egg whites.

“Whenever people see these words, the response is always positive,” said Miller.