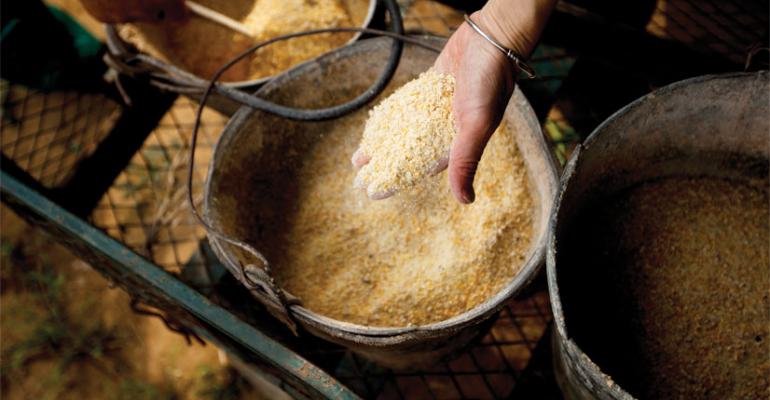 Sourcing organic product from overseas meets supply needs, but leads to other challenges

Increasing demand for organic and non-GMO product is ramping up pressure on ingredient suppliers, but is it really anything new?

For years, industry experts say, the organic movement has struggled with supply chain issues as growing interest in organic product has challenged producers.

Whole Health is a quarterly special report by Supermarket News examining news and trends in health and wellness.

IN THIS ISSUE:
• Pressure Rising: Importing Organic Feed From China

• M&A Activity Up in Nutrition, Health and Wellness

A recent article in the Wall Street Journal, however, put the spotlight on one particular area that seems to be under strain — the production of organic feed crops, particularly corn and soybeans, which are fed to livestock to be certified as organic. In some Midwestern states, the article points out, farmers of conventional feed crops have been hesitant to switch to organic, in part because they don’t see any clear financial incentives to do so, and others have switched back to using pesticides after a disappointing foray into organics.

As a result, some farmers and ranchers seeking to produce organic meat and dairy products are turning to countries like India and China to supply their organic feed. Imports of those products from China and India could double to surpass $100 million in value this year, the article noted, citing U.S. Department of Agriculture statistics.

In an interview with National Public Radio, the author of the article, Mark Peters, said that U.S. farmers of commodity crops have “become the least productive part of the [organic] food chain,” failing to keep pace with a segment of the food industry that grew 35% over the last five years to about $29 billion annually, according to the Organic Trade Association. That’s three times faster than the food industry as a whole, Peters pointed out.

“Particularly in corn and soybeans, when it comes to producing enough organically, there is a gap,” he said. So places like dairies and poultry facilities that need animal feed have to import it from China or India or Canada.”

Peters said some growers have told him, “Right now the incentive to switch to organic isn’t there, or isn’t enough to switch some of their acreage. So the question is, is [importing from India and China] a stopgap, or does it move to the cheapest place?”

The problems with importing such feed products include consumer trust that the products are legitimately organic, since many may question the validity of certification processes overseas. Those fears are compounded by the number of food-contamination reports that have emanated from China in recent years.

Peters pointed out that as demand for organic product grows, so do the incentives for producers to misrepresent their products as organic.

In addition, others worry about the carbon footprint of hauling products such long distances rather than sourcing locally.

“We shouldn’t be shipping stuff halfway around the planet if we don’t have to,” Mark Squire, co-owner of Good Earth Natural and Organic Foods, an independent retailer in Fairfax, Calif., told SN.

He said organic consumers have long been accustomed to “bumps in the road” when it comes to organic supply.

“There may be ups and downs along the way, but nonetheless, I would say, isn’t it the job of suppliers and food chains to forecast future demands and meet them?”

He said as a retailer he is used to seeing shortages of some organic products, although he noted that he’s seen them less than he used to in the 1990s.

United Natural Foods Inc., the Providence, R.I.-based distributor of natural, organic and specialty products, has said in several recent conference calls with analysts that demand had outstripped supply for certain products, although it was not specific.

Andrew Wolf, a Boston-based analyst for BB&T Capital Markets, who follows companies in the natural and organic space, noted that recently shortages have appeared in the supply chain for a few key products, including almonds and chia.

“You get that from time to time,” he said, noting that increased demand for almonds may be a product of consumers shifting away from peanuts, and also a shift toward more consumption of almond milk as an alternative to both dairy and soy.

Part of the pressure on the supply of organic product grown for feed, he explained, is the large volume of the crop that is needed to produce livestock through its lifecycle, as opposed to crops that are grown for direct human consumption.

“A cow or a pig or even a chicken has to eat so much feed to convert it to muscle mass, that it’s a very biologically wasteful way to produce calories,” he said.

He noted that the organic supply problem cited in the Wall Street Journal article for the most part appears to be centered on row crops in the Midwest.

“In fruits and vegetables, many of which are grown in California, the supply is fine,” he said.

“The whole brand of ‘China’ when it comes to food is very interesting,” he said. “A lot of these U.S. organic and natural producers don’t want to get stuck saying they used feed from China. It’s about whether the Chinese grain is pure or adulterated. That can hurt the brand.

One alternative he suggested might be the introduction of a “transitional” label that would allow for the use of ingredients grown on farms that were not yet certified as organic, but had begun the process of switching. (In order to be certified as organic, a field must be free from prohibited substances such as certain chemical pesticides and GMOs for three years before the first organic crop can be harvested.)

Squire of Good Earth, however, said he thinks a transitional label — which has been used in the past, but without formal certification — might not work.

“I believe that if a label doesn’t have any solidity behind it, does the industry a disservice,” he said. “I think there’s a good idea behind that, but how you define it becomes very, very complicated very quickly.

“I think that also brings up the problem that if it becomes too easy for growers to switch, you would have growers jumping in and out all the time, and ‘transitional’ would become pretty meaningless,” he added.

He also said he believes consumers strongly believe that the three-year wait to become certified as organic is very important.

“It would be nice for the marketplace to have easier entry [into becoming certified organic], but I think producers need to understand organics is more of a long-term commitment,” he said.

On the recent NPR radio show on the topic, Gary Hirshberg, co-founder and chairman of Stonyfield Farm yogurt, and founder of the “Just Label It” movement to label GMO product, pointed out that when conventional farmers are getting good prices for their crops grown using pesticides and GMOs, there is less incentive for them to switch to organic.

He cited an example of when his own company several years ago needed to buy a load of blueberries from China, he hired an auditor to appraise the local inspector.

However, another speaker on the NPR program, Lynn Clarkson, founder and president of Clarkson Grain, Cerro Gordo, Ill., a supplier of organic feed, noted that in China and India, many farmers “had been farming organically by default” — they lacked access to chemical pesticides and GMO seeds anyway.

“When the demand for organic feed grain pushed beyond the supply available in the U.S., all they had to do was step right in, with no conversion costs,” he said. “Some of them are very well run, highly managed farms, and meet U.S. standards.”

Carlotta Mast, editor in chief of NewHope360 and Natural Foods Merchandiser, and lead author of the NEXT Forecast 2014 report on the natural products industry, said that the increasing demand for non-GMO product could potentially exacerbate the supply chain pressures.

Whole Foods Market, which announced at Natural Products Expo West this year that it would require GMO labeling on all products in the store by 2018, will put more pressure on the supply chain.

“It affects every part of the store, even meat labeling, so the feed will have to be non-GMO — that will put more pressure on demand, whether or not it is organic,” she said.

“There are brands that will have to pull specific products from Whole Foods, because they don’t want to have to carry that label that the product could potentially contain GMOs,” she said.