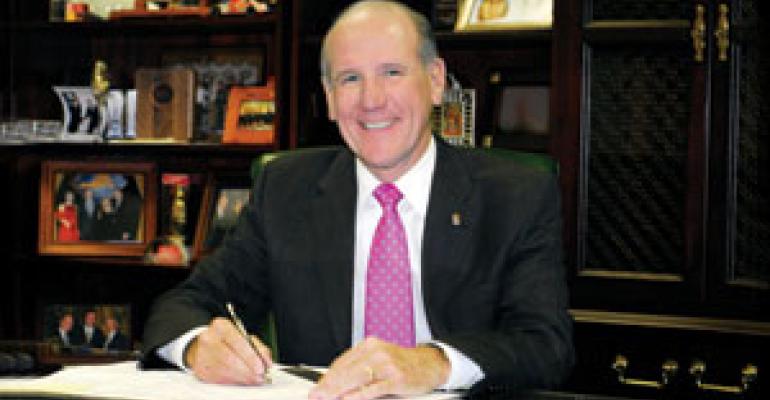 ARLINGTON, Va. The steady drumbeat of food crises over the course of the past year is providing a call to battle for Steve Smith, the incoming chairman of Food Marketing Institute here. If there's one issue that keeps me up at night, it's consumer confidence in the safety of our food supply, Smith told SN. I think the last six to eight months have been some of the toughest in my 30-plus years in this

ARLINGTON, Va. — The steady drumbeat of food crises over the course of the past year is providing a call to battle for Steve Smith, the incoming chairman of Food Marketing Institute here.

“If there's one issue that keeps me up at night, it's consumer confidence in the safety of our food supply,” Smith told SN. “I think the last six to eight months have been some of the toughest in my 30-plus years in this industry. From the spinach E. coli situation to pet food to peanut butter, it seems like there's been one recall after another.”

Smith, who is president and chief executive officer of K-VA-T Food Stores, Abingdon, Va., begins a two-year term as chairman of the association at this week's FMI Show. He succeeds Jeff Noddle, the chairman and CEO of Supervalu, Minneapolis.

Under Noddle's tenure, FMI reorganized its exhibit show and educational forum into an alternating-year format that will rotate to different cities. Next year's event will be an exhibit show in Las Vegas, and in 2009 FMI will stage an educational forum, focusing on personnel development, in Dallas.

That change is among a host of issues Smith and his team will have the opportunity to influence over the next two years. The association is also coping with the legislative challenges created by a reversal of power in Congress, as well as ongoing consolidation in the industry.

Smith said coping with the food safety issue, however, will be his top priority. It is an issue of importance to all of FMI's diverse range of membership, from independents to chains, across traditional and nontraditional formats, as well as suppliers.

One of the most frustrating things about the spate of recent food recalls, Smith said, has been the slow resolution of the causes of these outbreaks.

“In these recalls, there hasn't always been a clear answer why,” he said. “I think if you have an item mislabeled or an item with a foreign object in it, you can attribute that to human error, and you can fix that. But in some of these cases, there wasn't a good answer right away.”

Smith said he plans to help tackle the challenges of food safety by bringing back FMI's food safety task force, which would be made up of FMI leadership as well as other industry leaders that have a strong understanding of the issue. He said he will look for someone to head that task force.

In addition to retailers and FMI executives, he said the task force will also involve suppliers and others “who have a vested interest in making sure that consumer confidence is where it should be.”

“Let's be proactive, so when the inevitable comes, when we have a dire situation in our food supply for whatever reason, we will at least have the infrastructure in place to deal with that,” he said. “We need to be able to communicate with each other to rebuild consumer confidence as quickly as it can be torn down, because it can be torn down in literally a day.”

As a relatively small regional operator, Smith said he brings a perspective forged from the close connection he has with his customers.

Smith said he sees his role and that of his vice chairs — Norm Rich of Weis Markets, Gary Phillips of Associated Wholesale Grocers, Ric Jurgens of Hy-Vee and Fred Morgenthall of Harris Teeter — as being one of guidance for the FMI staff.

Smith did describe his management style at K-VA-T as being very involved, however.

“My management style is to build a team, and to work very strongly within a team concept,” he said. “My people will tell you I am a hands-on guy — I want to be involved in everything, but I want them to make the decisions.

“My people probably do the best when I step back and let them make the decisions, and I think the same thing is true at an association.”

Smith said that in addition to food safety, there are several legislative issues that also have broad interest across all of FMI's membership. Government affairs have become especially important, since a Democratic-controlled Congress threatens to scale back the tax benefits that many businesses have enjoyed under a Republican regime, he explained.

“We've certainly got some political challenges now, when you change the lay of the land, as we did last November in Washington,” Smith said. “It's either fortunate or unfortunate, depending which issue you are talking about. We have had a business-friendly environment for the last 10 years in Washington. Today, it's not necessarily as friendly, and we'll be challenged to keep some of the tax cuts that we've all been fortunate enough to benefit from, and from some of the legislative friendliness.”

As is the case with food safety issues, Smith said he believes the industry needs to think ahead on government issues in order to minimize the potential fallout from the newly elected Congress.

“I hope we as an organization can get more proactive,” he said. “We fought that country-of-origin labeling for years and years, but now we've got this group of Democrats there, so we need to figure out a way we can work with this without somebody forcing those issues down our throat.

“I think you have to think that way with the Democrats in charge — what are the issues that are going to resonate, and how can we be proactive to address those before we get force-fed some bad legislation that's going to cost businesses and consumers more money?”

Other legislative issues on the agenda for FMI in the years ahead include interchange fees, estate taxes and, more immediately, a measure that would make it easier for unions to organize a workplace.

The issue of interchange fees — which are charged by credit card companies in exchange for accepting their cards — is one of the areas in which FMI might actually benefit from having a Democratic majority in Congress. In fact, just a week ago FMI issued a statement applauding Rep. Melvin Watt, D-N.C., for criticizing credit card companies, during an April 26 Financial Services Committee hearing, for overcharging retailers with interchange fees and using the money from the fees to finance direct-mail solicitations.

“Interchange is one of the issues that resonates better on the Democratic side of the aisle than it does on the Republican side,” Smith said.

He said the issue of the estate tax — a levy on inherited wealth that has been suspended but is due to return in 2011 — is still very important to many FMI members, especially those with family-owned businesses.

“It may not be that the environment in Washington is perfect to get that fixed but we can't forget that issue and what a devastating thing that can be for some companies,” he said. “I don't think that for retailers like us, or others, it is the best thing to be consolidated or to go out of business, yet we have laws in place that tend to promote that.”

While interchange fees and the estate tax have been long-standing areas of contention between FMI and Congress, the industry recently got caught by surprise with the introduction of the Employee Free Choice Act, which businesses said would make it easier for unions to organize workplaces.

The new legislation allows unions to organize a workplace simply by getting enough signatures from workers, rather than having a secret ballot.

Although the measure is being considered by the Senate after passing the House, Smith said he is confident that President Bush will veto the bill if it comes before him.

While the industry has a clear stance on one side or the other of these legislative issues, on the matter of rapidly escalating health care costs it's less clear what position the association and the industry as a whole can take.

“It's an issue that really resonates across the whole membership, and it's a very complicated issue,” said Smith. “It's very different for unionized employers and non-unionized employers, for large vs. small retailers. It's one of the toughest issues that we face and one of the toughest issues that we will be able to solve. Certainly we're all affected by it, and we all have a vested interest in addressing it.”

But just what to do about the situation remains a matter of debate, he said.

“I think if you took a poll of FMI members, you'd get a lot of different answers on that subject,” he said. “What is the right direction for our industry on health care? That's not an answer that our industry or the association has addressed at this time.

“There is a system now that all of us would agree is not the most efficient to operate in.”

Pharmacy is also an issue that Smith said he thinks should be a focus of FMI.

FMI should also be keeping a close eye on rising food costs, Smith said, particularly as demand for corn-based ethanol increases, which has the potential to drive up costs throughout the food chain.

“I think that's one of the issues we will need to be cognizant of going forward,” he said. “I think we are just on the edge of it right now, and I'm afraid it's going to get worse before it gets better.”

Smith also comes on board at a time when the association itself is facing challenges, in part driven by consolidation in the industry that has left fewer industry players out there on all sides.

In an effort to revive interest in its annual conference and exhibition, FMI last year unveiled a plan to switch to an every-other-year exhibit format and to rotate the event to different cities. It has been in Chicago since 1985, but will move to Las Vegas next year and then to Dallas in 2009 as an educational forum. The theme for the 2009 education forum will be leadership development, a topic that was selected because of its broad appeal across membership as today's generation of Baby Boomers begins to exit the workforce.

“I think the educational forum we've got planned is going to be very important, and that's something we've got to stay focused on,” he said. “We really do need to look at who are the next set of leaders that are going to take our industry and continue to perpetuate its success in the future. I think we've got to prepare them better than we have in the past.”

FMI can also make more use of technology to educate its members on a range of topics, Smith said.

“Technology is one of those tools we can use without having to travel across the country to enhance members' knowledge,” he said. “I don't think we, as an industry, have embraced that concept.”