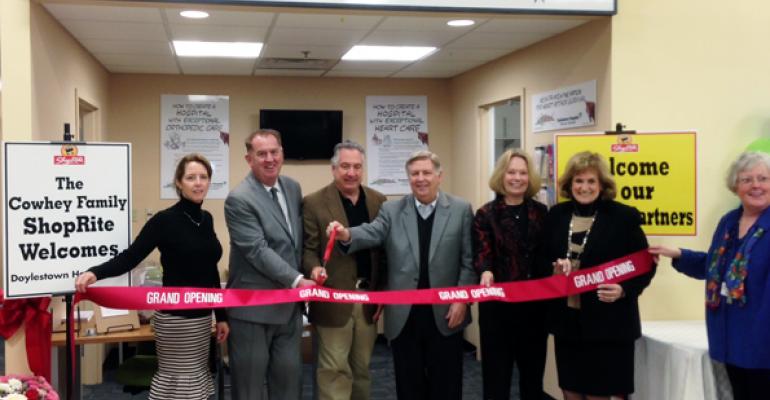 “The health care concierge fills the function much like a hotel concierge would by matching what the community has to offer with what the customer is looking for,” Sheri Putnam, an executive director at the hospital, told SN. “Our plan is to take the health message out of the hospital and into the community.”

Store operator Joseph Cowhey approached the hospital with the idea to partner after space occupied by a bank was left vacant. The ShopRite of Warminster has a pharmacy but no dietitian and Cowhey wanted to enhance its health and wellness offering.

“A lot of people who use our pharmacy have questions about their diabetes or other diseases,” he said.

Cowhey reached out to Doylestown Hospital just as its health assessment survey identified a need for greater access to general health information in the community. While the hospital has a number of programs focused on chronic disease prevention and management, it needed a way to reach more people before they got sick.

“The average person — if they’re lucky — comes to the hospital once every 10 years, but they’re in the supermarket a couple times a week so we thought it would be a really non-threatening environment where we could create an approachable atmosphere.”

The health care concierge has greeted a steady stream of shoppers since the center’s launch last Sunday. “The reaction has been great with a lot of people stopping to talk and ask questions,” Cowhey said.

"The intent is to provide a community service — not to be a moneymaker," he said.

Eventually the hospital’s nutrition experts will conduct classes, lead healthy store tours and partner with the retailer in other ways.

“We’re writing this book as we go since we’ve not found another prototype like it,” Putnam said. “Our hope is that [the idea] will spread to other retail locations.”