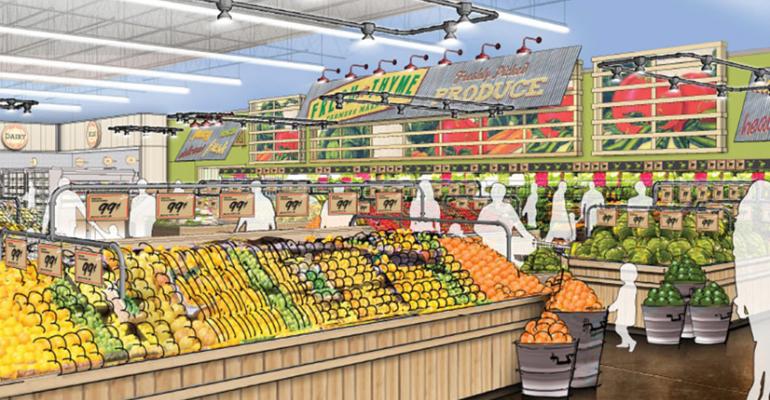 <p> Fresh Thyme plans including generating more than 25% of its sales from produce.</p>
Issues & Trends>Health & Wellness

The Thyme Is Now for Natural Food Startup

Natural food veteran Chris Sherrell &mdash; with an assist from Meijer &mdash; takes aim at conventionals in the Midwest

Though it’s still months before Fresh Thyme Farmers Market sells its first head of lettuce, one gets the sense Chris Sherrell is ready to direct you to the nearest open register.

During the course of a conversation, Fresh Thyme’s president and chief executive officer often slips into the present tense, describing the nascent concept as though 54 stores — Fresh Thyme’s six-year goal in the Midwest states — were already in the ground. That’s both a reflection of his experience — he is a former CEO of Sunflower Farmers Market, which accomplished a similarly sized rollout of a similar concept in the Southwestern states, and his team includes veterans of that and other natural food retailers — but it is also an indication of his enthusiasm and his confidence.

For the record, Fresh Thyme’s first store, in the Chicago suburb of Mount Prospect, Ill., is set to open early next year. “That’s right around the corner,” Sherrell noted during an interview with SN in early November. “The holidays are going to eat some time and we’ll be right there: Two months until the doors open.”

Sherrell has a pretty good idea of what Fresh Thyme will mean for the Chicago market, even if the market is unfamiliar with both the name — and to a large extent, the farmers’ market store concept itself — at the present time.

He describes a store very much like Sunflower Farmers Market — and Sprouts Farmers Market, to whom Sherrell and Sunflower sold a year-and-a-half ago. As those concepts did, Fresh Thyme will pursue conventional grocery store shoppers by offering sharp pricing on produce and capitalizing on long-term consumer trends toward healthier lifestyles.

The store will aim to generate more than 25% of its sales from produce, and offer an assortment that facilitates a healthy lifestyle but is not strictly organic: Bulk foods, vitamins and supplements, prepared foods, natural cleaning and health products, and a grocery component consisting mainly of natural national-brand alternatives. It will all go into a box of about 26,000 to 28,000 square feet — stores that carry beer and wine will be the larger ones — often in second-generation neighborhood locations.

It is a formula that Sprouts, Sunflower and predecessors like Henry’s Farmers Market have successfully built through the Southwest and West states. Sherrell’s vision for Fresh Thyme in the Midwest is to advance the concept, not reinvent it.

“It’s hard to fix something that’s not broken,” he confessed. “We look at what Henry’s, Sprouts and Sunflower have built today, and it’s absolutely phenomenal, and there’s no reason to believe they won’t continue with that success. It’s a great concept.”

Sherrell said he had two significant changes in mind for Fresh Thyme. For one, stores will offer a more dynamic foodservice component. Secondly, the chain will be built with technology and other infrastructure backing its start-up predecessors never had.

“We’re taking foodservice to a different level,” Sherrell said. “Where we’re not going to be Whole Foods, we’re going to bring it up a notch from the traditional farmers’ market.

“The traditional farmers’ market approach to foodservice has not been the strength of the concept, and it was never intended to be the strength of the concept,” he added. “But we felt the foodservice — whether that’s deli, olive bar, cheese — could use an upgrade, and so we’re really focusing on a new, dynamic sandwich program with healthy alternatives. We’re looking at salad bar offering that the current farmers’ market does not have. We are looking at a hot bar with a few daily choices and we’re looking at really expanding the grab-and-go items with much more healthy choices and organic choices. That hasn’t been an area that farmers’ markets have traditionally focused on.”

Though just 37 years old, Sherrell is a 20-year veteran of the natural food industry. He began his career as a teenager with Wild Oats Markets, serving that company in a variety of roles, and joined Sunflower upon its founding in 2002. He had ascended to chief operating officer by 2011 when he was thrust into the role of interim CEO following the arrest of Mike Gilliland on felony charges. His success continuing a busy program of store expansion at Sunflower amid the chaos got the “interim” tag removed but he chose not to stay following the merger of Sprouts and Sunflower, completed May 2012.

Work on what would become Fresh Thyme began almost immediately after the Sprouts-Sunflower deal, thanks in part to financing from an unlikely source. Details are scarce, but sources have confirmed that Grand Rapids, Mich.-based superstore operator Meijer is a major financial backer of Fresh Thyme. (Meijer has not publicly acknowledged its involvement and Fresh Thyme officials have declined to address details of the arrangement.)

Sherrell said only that Fresh Thyme has “very supportive financial backing” that will facilitate a more sophisticated rollout than the bootstrap-like development of a company like Sunflower. This includes staff, development support and technologies.

“One thing we were able to do is build a team that I’ve never had with a startup company before. That comes with being well-financed and having a team in place from the start,” Sherrell said. “We’ll open our first store from an IT standpoint from a full system schematics, back-door receiving — all the technologies we didn’t have in my prior life until year six or seven or eight, and some still don’t have.”

Sherrell’s leadership team includes many veterans of Sunflower, Wild Oats and Henry’s, including Jim McCloskey, its chief financial officer who served the same role at Sunflower, and Brandon Bagley, a former Wild Oats, Whole Foods and Henry’s executive who serves Fresh Thyme as executive vice president of sales, merchandising and marketing. Fresh Thyme’s general counsel; and its directors of operations; real estate; marketing; meat and seafood; produce and floral; and vitamins and body care all come from Sunflower.

Industry observers speculating as to Meijer’s objectives in funding the operation said they believe the chain is looking to participate in growth opportunities that its expertise as an operator of large multidepartment stores does not afford — such as the opportunity to penetrate dense, mature urban markets like Chicago.

“It’s an interesting proposition for Meijer,” Neil Stern, senior partner with McMillanDoolittle, Chicago, told SN. “It’s been incredibly difficult for them to really penetrate the Chicago market. They have such a large footprint and getting real estate for that footprint has been difficult for them.”

Stern noted Meijer’s dilemma is not unlike that of Wal-Mart Stores, which is developing smaller formats for similar purposes. But he said Meijer’s attempts at operating a smaller, food-focused banner (Meijer Marketplace) and smaller footprint superstores have seen mixed results so far. “I don’t know if they’re happy with the performance of those stores so far.”

With Fresh Thyme, “this is all a way to find a way to gain more presence in a market where you can’t just plop down giant supercenters.”

With several major conventional banners in Chicago and other Midwest cities in their own turmoil, now could be the right moment to introduce an alternative, Sherrell said. Around Chicago, Fresh Thyme will be focused on winning shoppers from longstanding grocery brands like Jewel and Dominick’s, and not necessarily from upscale, organic chains like Whole Foods. Success tackling new territories for Sunflower gives Sherrell confidence he will succeed.

“We look at the level of competition in the Midwest and, as you can imagine, the conventional competition in the Midwest is not the strongest in the country,” Sherrell said. “That really opens up some market share. And from opening up these stores previously in places like Oklahoma, where you might not have expected a natural food store would thrive, and it’s done exceptionally well. So we’re very bullish.

“It’s not a secret,” he explained. “We build these stores for a lot cheaper than your typical organic or specialty food retailer. But there are other reasons. When 25% to 28% of our sales are produce, we move produce so much quicker, so our shrink level is remarkably less. Where a conventional market may have 10%, 12% or 15% shrink, we may have 3% to 5%, because we move a tremendous amount of tonnage through the stores.”

Store layouts will be low-slung, open and inviting. This is important as the chain seeks “transitional” shoppers from conventional chains. A selection of familiar brands — Sherrell mentioned Cheerios, for one — will also make shoppers feel comfortable.

“People walking in won’t see a huge organic superstore, 50,000, or 60,000 feet. It’s very comfortable,” he said. There’s not that intimidation factor you might get when you go into one of the super organic stores.”

Fresh Thyme’s growth plan calls for eight stores opening in 2014 and nine or 10 per year in the years after that. The chain was close to making a formal announcement of its initial sites as SN went to press but various press reports indicate that in addition to Mount Prospect, stores are set for Bloomington, Minn., and Deerfield, Ill. The company said in addition to Chicago and the Twin Cities, the company is eyeing metro St. Louis and Indianapolis markets.

“Our biggest concern at first was securing real estate sites but now it’s understanding the local flavor if you will,” Sherrell said. “We have to be sure we do our homework and understand that we’re going into a part of the country that hasn’t seen this. We have to make sure we visit the competition and we make sure if there’s that one special brand of bread that if you don’t carry you’re not even considered a grocer in their eyes, that we have it.”

Stern of McMillanDoolittle noted that although Jewel and Dominick’s — the latter currently in the process of winding down — have struggled, competitors shouldn’t overlook the combined strength of independents, particularly around Chicago.

“The [Fresh Thyme] concept is intriguing and there’s no reason to think it wouldn’t work in a market like Chicago,” Stern said. “The challenge here is that this is a really strong market for independents as represented by Central Grocers. They are essentially the No. 2 players here, and Dominick’s is No. 3. You have players like Pete’s, Caputos and Tony’s, and all of these guys are very strong fresh players. So while the [farmers’ market] concept is new for Chicago, it’s not as if there aren’t a lot of guys who lead with fresh produce first in the marketplace.”