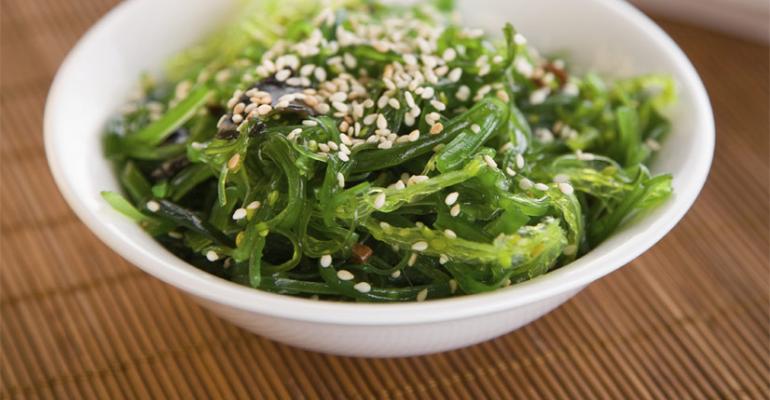 <p> Seaweed is on the Sterling-Rice Group list of 10 hot dining trends for 2014, and retail sales are hot, too.</p>
Product Categories

Surfing a New Wave for Seaweed

The product, most often Asian-grown versions known as nori and kelp, is seeing new interest in a variety of forms including the familiar sheets, crumbles used as a snack, topping, spices, spreads or flavoring, and even tortilla-style chips. A reputation as a “superfood” with appeal to the health-conscious, and a developing taste among schoolchildren has helped the buzz grow louder, landing the item on Sterling-Rice Group’s annual list of 10 hot dining trends of 2014. Figures show retail sales have been hot, particularly in the natural channel.

Today, a new wave of products are looking to usher seaweed further into the mainstream — and they intend to do it while trumpeting a message of health benefits and sustainability that comes along with the product.

Robert Mock understands the changing perception of seaweed. A banker originally from Texas, Mock is one of four Bay Area dads who co-founded Ocean’s Halo, a new brand of chips made from seaweed. As Mock explained it, the idea came about when he confessed to a Korean-American neighbor that he enjoyed snacking on the seaweed sheets his kids were eating, but he missed the crunch of the tortilla chips of his own youth. “I’m from Dallas,” he explained. “I’m a chip guy.”

A period of trial-and-error in home kitchens — and eventually, contracted professional help with ingredients and packaging — got Ocean’s Halo off the ground early this year. The chips, made of rice flour and seaweed, come in four varieties — with two more on their way — and can be merchandised in deli and prepared food departments where they can compete with other “better” snacks to accompany sandwiches or soups, Mock said.

Ocean’s Halo was named a “top 10” product in October by Mill Valley, Calif.-based Mollie Stone’s Markets, one of the first supermarket chains to carry the items — and the first to sell out. It also won a press award at the Natural Products Expo East.

Recent figures from SPINS indicate seaweed sales are especially hot lately. For the 52 weeks ending Aug. 31, the dried sea vegetables and seaweed category totaled sales of more than $10.6 million  — an 18.5% increase — in the natural channel. In the specialty gourmet, the category has grown by 39.7% to $1.5 million in sales.

“We’ve got a good-tasting chip and a nutritious chip, but beyond taste and nutrition we have sustainability,” Mock said. “We’re dealing with a primary ingredient which grows in the ocean with natural sunlight. There’s no land and soil aggregation. There’s no pesticides or fertilizers. Seaweed alone has a negative carbon footprint. It’s one of the fastest-growing crops in the world and the Earth is 70% ocean. One thing we’re pointing to that I think is resonating a lot is that this is a crop that can really change the way we think about corn, wheat and potato chips.”

Annie Chun — whose namesake seaweed sheets are the largest-selling brand in the category — today is behind a new brand with an eye on expanding the product’s reach. Whereas the Annie Chun brand (sold by its founding family several years ago to Korean food giant CJ Foods) was strictly about Asian foods, GimMe Health Foods is a lifestyle brand aimed toward kids and alternative snack sets, Steve Broad, Annie Chun’s husband and chief executive officer of the San Rafael, Calif.-based brand, told SN.

“Seaweed is an early stage emerging food for mainstream consumers and the interesting part is it’s really being driven by kids, especially kids age 5-10 and of all ethnicities, “ Broad said.

GimMe (the name comes from gim, the Korean word for seaweed) is distinguished by a kid-friendly turtle on its logo, and by estimable health and nutrition claims: It’s the first seaweed snack certified as organic by the USDA, and is non-GMO, gluten-free, low calorie, and is a good source of vitamins A and C, calcium, iodine and iron. “Sea vegetables are 10 to 20 times more healthful than land vegetables,” Broad said.

GimMe is also marketing sweetened seaweed crumbles as a crunchy snack or topping.

“Seaweed has traditionally grown through the Asian section in supermarkets, because of its Asian-style presentation,” Broad explained. “But we’re taking a different approach — more kid friendly, so as to change the dynamic of what it is.”

Ultimately, he said he feels seaweed snacks can succeed as part of an alternative snack set along with items like kale chips. “Korean gim is growing like wildfire now,” he said. “The grocery stores and natural food stores are recalibrating how much space to give to seaweed.”

While the vast majority of seaweed in the food supply is imported from Asia, Tom Roth touts a variety from the cold waters off the coast of Maine. His Scarborough, Maine-based company, known as Vitamin Sea, markets a variety of products from pet foods to seasonings to granolas, made with three varieties of Maine kelp, which he said benefits from growing in the clean, nutrient-rich tides of coastal Maine.

Roth’s products are available online and though small grocers and health food stores in New England.