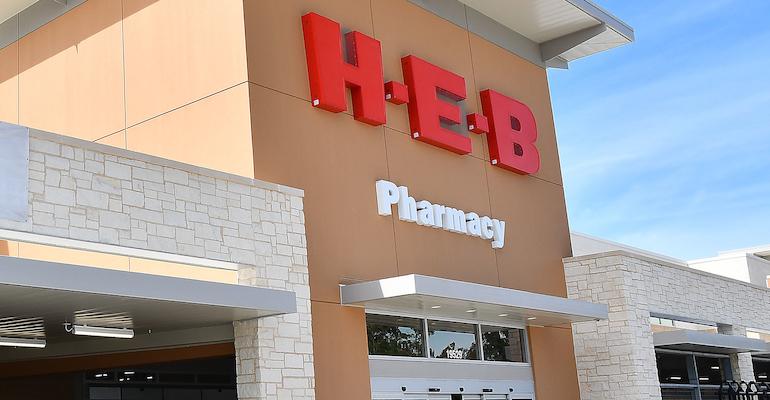 H-E-B stands at the top in pharmacy customer satisfaction

The annual survey, released Thursday, polled 12,142 customers who filled or refilled a prescription in the previous 12 months. To assess pharmacy customer satisfaction, J.D. Power examines areas such as prescription ordering and filling, cost competitiveness, pharmacists, non-pharmacist staff, prescription pickup, the store and prescription delivery at chain drug, supermarket, mass merchant and mail-order pharmacies and rates them on a 1,000-point scale.

Related: Hy-Vee brings COVID-19 ‘test to treat’ to all pharmacies

For the second straight year, Texas grocer H-E-B came in No. 1 in the supermarket category with a pharmacy customer satisfaction score of 785. That rating also toppled last year’s overall winner, independent drugstore network Good Neighbor Pharmacy (part of AmerisourceBergen), which recorded a score of 740 in the 2022 study. Rounding out the top five overall scores after H-E-B this year were Sam’s Club (759), Wegmans Food Markets (754), Costco Wholesale (749) and Publix Super Markets (747).

“This award illustrates a true team effort among all H-E-B Pharmacy partners and is a direct result of everyone’s hard work, leadership and dedication to the health and wellness of our customers and communities throughout Texas,” Craig Norman, senior vice president of pharmacy at H-E-B, said in a statement. The company noted that it ranked at the top in customer satisfaction in all seven performance metrics, including people, time and cost savings, pharmacy trust, resolving problems or complaints, digital channel offerings (website, mobile app, text), pharmacy offerings meeting customer needs (medication and health/wellness services) and the ability for patients to get prescriptions how and when they want. 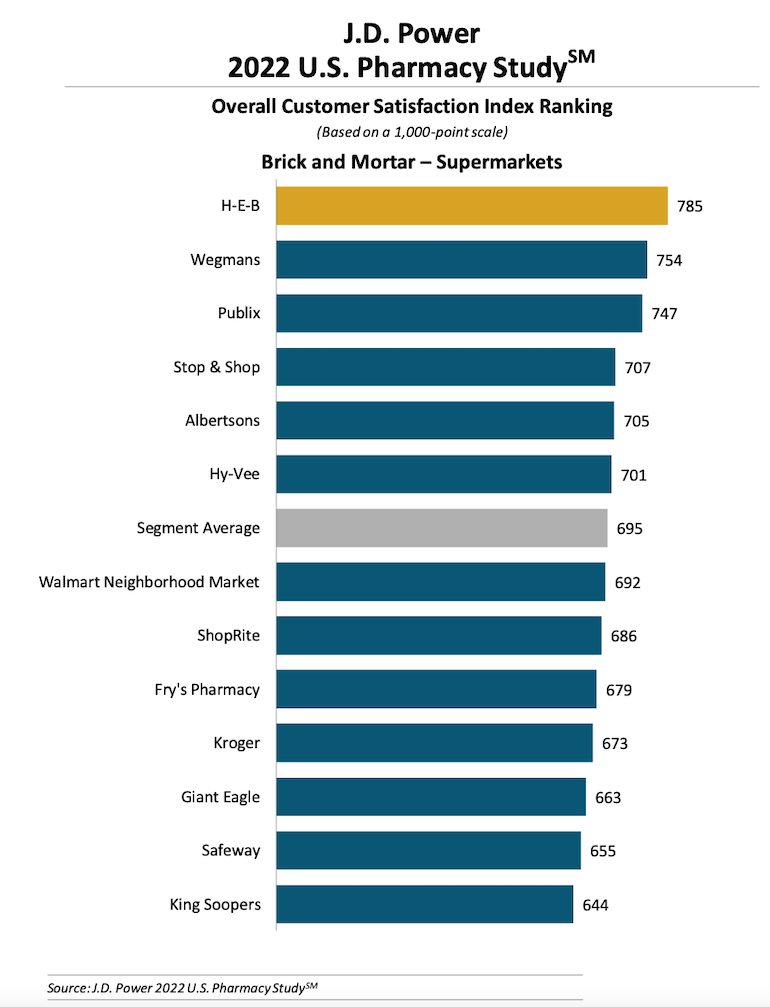 J.D. Power’s 2022 study again showed supermarkets being edged out by mass retailers in the highest satisfaction rating by segment. Mass merchants posted an average segment score of 700, just above supermarkets at 695 and higher than last year’s top scorer mail-order pharmacies at 675 and chain drug stores at 656.

Walmart, the third-largest U.S. pharmacy retailer, again received a below-average score (667) in the mass merchant pharmacy category, with its Sam’s Club subsidiary and Costco coming in well above the segment’s mean score of 700, which also was topped by CVS at Target. 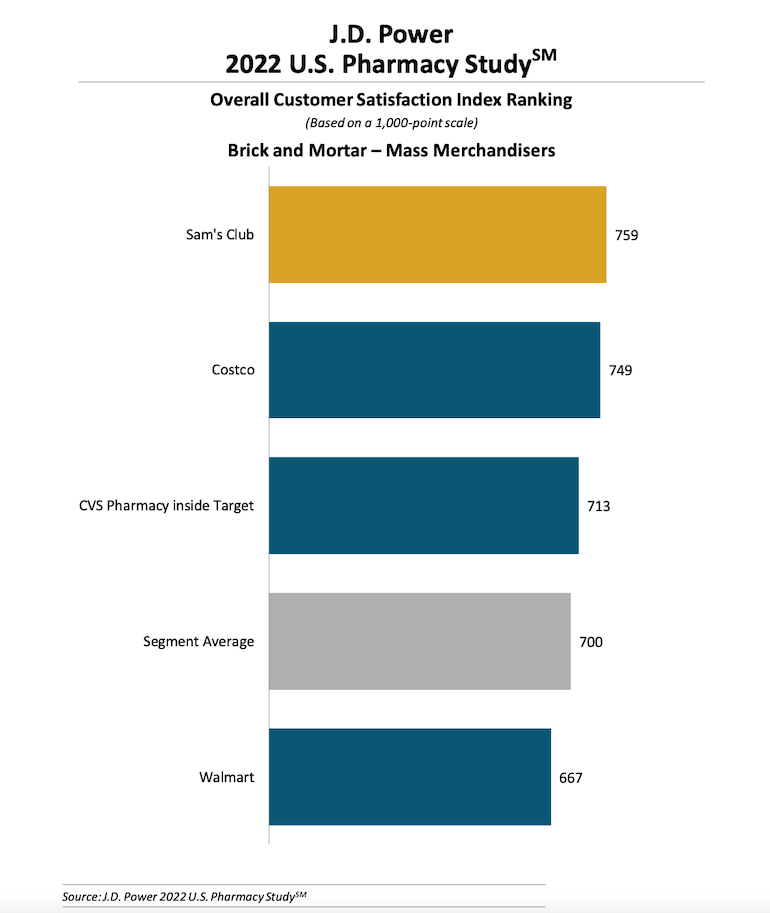 According to Christopher Lis, managing director of global health care intelligence at J.D. Power, health and wellness services — on top of current medication management program — may be the key to retail pharmacy industry growth, namely amid increasing competition from online retailers like Amazon.

J.D. Power said 66% of brick-and-mortar pharmacy customers now have an Amazon Prime account, and 48% are aware of pharmacy services offered by Amazon. In addition, 14% of those aware of Amazon’s pharmacy offerings have used its Pill Pack service, filled via Amazon Pharmacy. And of that group, 38% reported that they “definitely will” switch pharmacies in the next 12 months. 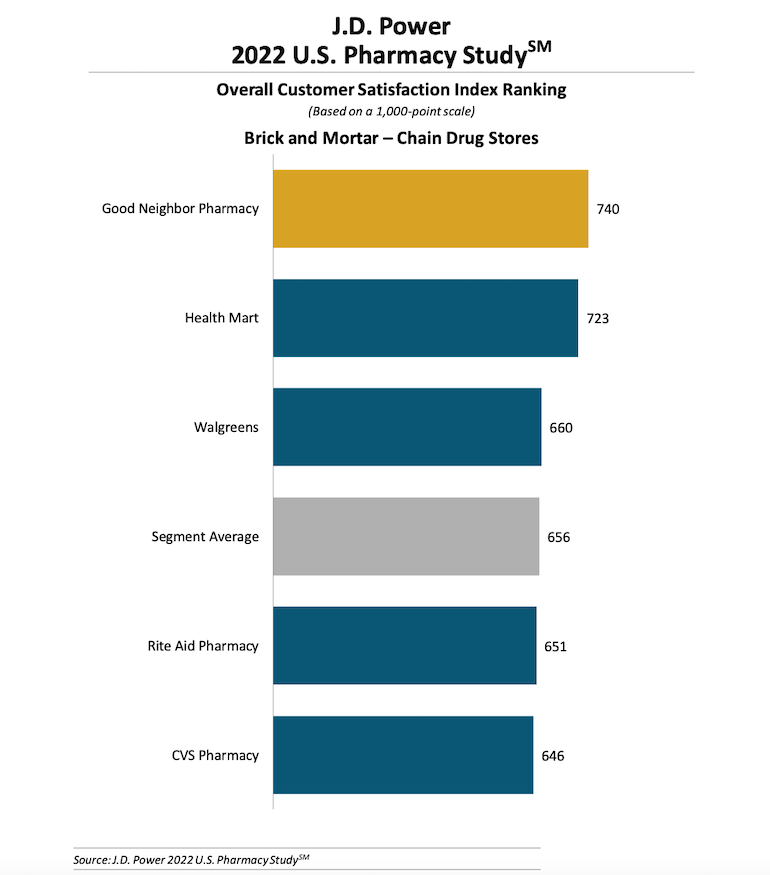 “Customers are beginning to embrace their retail pharmacy as a hub for a broad range of routine health and wellness services,” Lis explained. “This transformation is happening simultaneously with rising competition from online retailers such as Amazon, which is raising the stakes for local retail pharmacies. This is an opportunity for more retail pharmacies to innovate as a one-stop shop for routine care and to leverage data and technology to create an increasingly personalized customer experience.”

Mobile app use may mark another competitive battleground on the prescriptions front, J.D. Power added. Among brick-and-mortar customers who use their pharmacy’s mobile app, 59% do so to manage prescription refills and 57% to view prescriptions. Overall satisfaction among those who have used their pharmacy’s mobile app six or more times in the past 12 months rated at 715 on the 1,000-point scale, 32 points higher than those who used the app up to five times. The poll also found that frequent app users are less likely to say they will switch pharmacy providers.

J.D. Power noted that the U.S. Pharmacy Study, now in its 14th year, was redesigned for 2022, with survey respondents having filled a prescription within the past 12 months versus within the past three months in the previous studies. Scores also came in noticeably lower for 2022, compared with 2021 segment averages of 863 for supermarkets (versus 695 this year), 866 for mass merchants (vs. 700 this year), 856 for chain drugstores (vs. 656 this year) and 877 for mail order (vs. 675 this year).