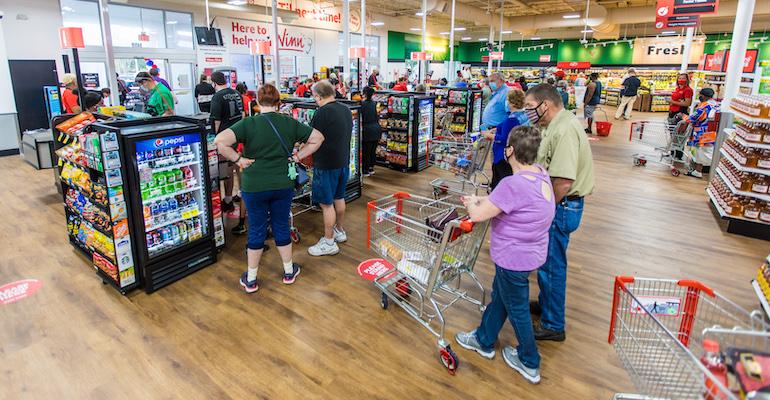 Pricing up in all major grocery-store food group indices

The U.S. Bureau of Labor Statistics (BLS) reported Tuesday that the Consumer Price Index for food-at-home swelled 10% year over year (unadjusted) for March, the largest 12-month increase since March 1981. That built on an 8.6% gain in February, which BLS said last month marked the biggest 12-month uptick since April 1981. 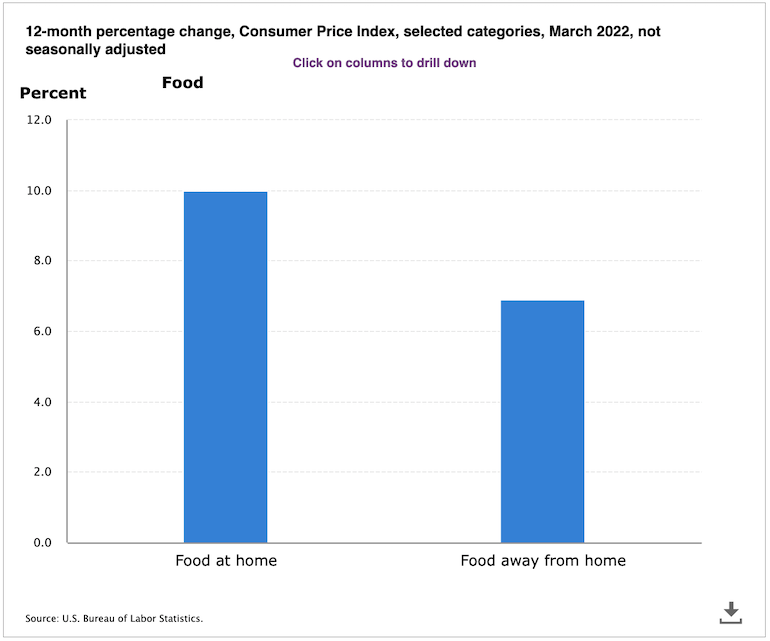 BLS noted that all six major grocery-store food group indices experienced price hikes for March. The largest gain came in the other food-at-home index, which rose 2% month to month, followed by fruit and vegetables at +1.5% (after a 2.3% increase in February); cereal and bakery products (+1.5%); non-alcoholic beverages (+1.2%); dairy and related products (+1.2%); and meat, poultry, fish, and eggs (+1%).

Year over year, the food-at-home index for meats, poultry, fish and eggs climbed 13.7%, with the beef index up 16%. BLS said the other major grocery-store food group indexes also rose over the past year, with increases ranging from 7% for dairy and related products to 10.3% for other food-at-home.

Overall, the March CPI (for all urban consumers) rose 8.5% year over year (unadjusted) for March, compared with a 7.9% rise in February. The 1.2% month-to-month gain (seasonally adjusted) in March topped monthly upticks of 0.8% in February, and 0.6% in both January and December.

Total food pricing rose 8.8% year over year and 1% month over month in March, following respective increases of 7.9% and 1% in February. Food-away-from-home climbed 6.9% year to year but edged up only 0.3% month to month.

Excluding food and energy, the March CPI was up 6.5% from a year ago and 0.3% month to month, BLS reported. Still-booming energy costs were the primary driver of March’s CPI jump, rising 32% year over year and 11% month to month. Gas and fuel oil prices jumped 48% and 70.1%, respectively, versus a year ago. The monthly increases were 18.3% for gas and 22.3% for fuel oil. 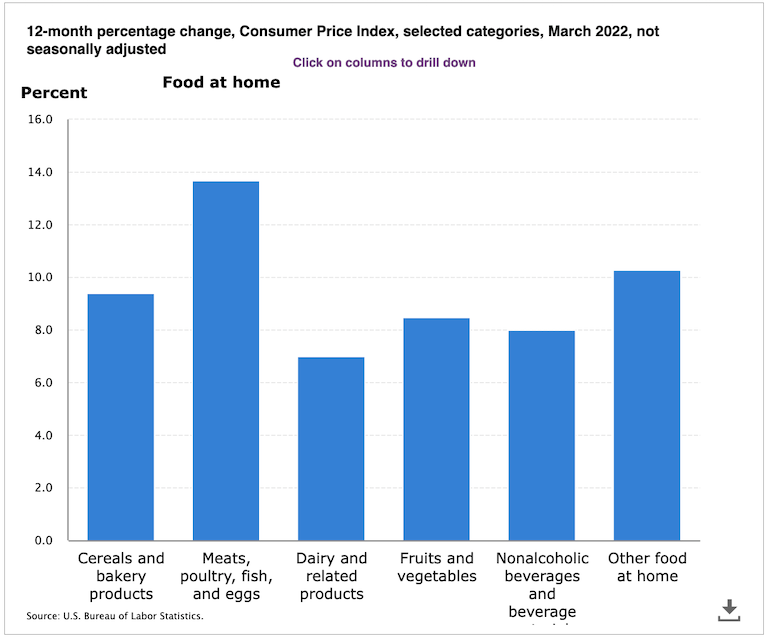 Grocery online prices in March signaled the highest increase for the category on an annual basis and also rose 1.4% month to month, Adobe said. On a year-over-year basis, online grocery pricing has surged from gains of 7.6% in February and 5.8% in January. Adobe noted that March also represented the 26th consecutive month where online prices have risen for groceries — the only category to “move in lockstep with the CPI” on a long-term basis.

“Consumers are feeling a greater hit to their pocketbooks, with consistently high levels of online inflation in categories such as groceries and pet products,” Patrick Brown, vice president of growth marketing and insights at Adobe, said in a statement. “But while e-commerce prices have risen more than years past, durable demand shows that consumers are embracing more personalized experiences in the digital economy as well as the conveniences of online shopping, particularly for growing categories like groceries.”

New research by the FMI-The Food Industry Association indicates that grocery shoppers are reacting to food inflation. FMI’s 2022 Grocery Shopper Trends report found that average household spending on groceries rose just 4% to $148 per week so far in 2022, well below the $161 per week seen at the height of the pandemic.

To ease the impact of escalating food prices. 31% of shoppers polled said they’re buying items only when on sale, and 15% reported purchasing frozen meat and seafood instead of fresh. Consumers also are saving at the grocery store by buying more store brands (cited by 35% of those surveyed) and making substitutions or product changes like purchasing more frozen meat or canned produce (58%). Shoppers with annual incomes less than $40,000 reported not buying as much fresh meat/seafood (31%) or fresh produce (23%) to rein in spending.

By retail channel, grocery price inflation jumped the most at dollar stores, according to consumer data specialist Numerator. Year-over-year grocery pricing was up 21.6% in the dollar channel in March versus a 14.8% uptick in February, followed by online (+13.2% in March), mass merchants (+10.5%), supermarkets (+9.6%) and warehouse clubs (+7.5%).