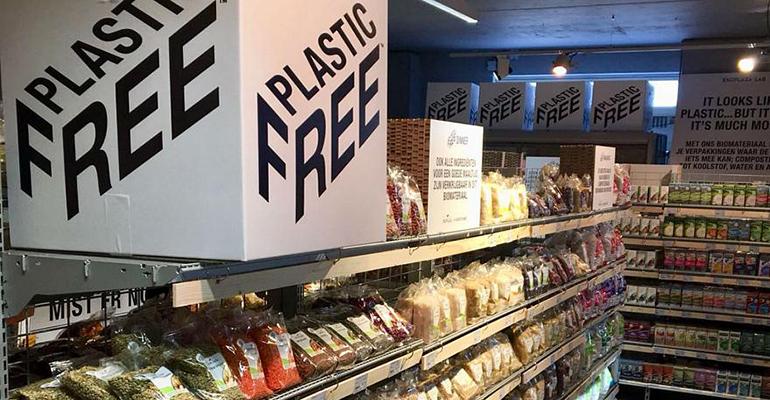 Nearly 100,000 people have signed a petition encouraging Kroger Co. to offer an aisle that is free of plastic packaging, following the launch of such an aisle in Dutch supermarket chain Ekoplaza.

The petition, launched by activist organization Care2, which supports animal welfare and other causes, calls on the Cincinnati-based retailer to follow Ekoplaza’s lead and eliminate plastic from one aisle in each of its 2,300-plus locations, citing the environmental impact of plastic waste.

In a little over a week, the online petition has garnered more than 96,700 signatures.

“I think this really demonstrates just how many people care deeply about plastic pollution and are calling on companies, like Kroger, to lead the way in solving it,” Rebecca Gerber, senior director for engagement at Care2, told Supermarket News.

She said the group chose to target Kroger with its petition because of its size and name recognition.

“If they made this change, Kroger would demonstrate true leadership in sustainability, and we think many other supermarket chains would follow their example,” said Gerber.

She said Care2 plans to send the petition to Kroger when it obtains 100,000 signatures.

Ekoplaza, an organic supermarket chain with 74 locations in the Netherlands, debuted the plastic-free aisle last month at a store in Amsterdam, offering more than 700 items packaged in glass, cardboard, metal or other materials, including a compostable film that resembles plastic. Items available in the plastic-free aisle include meats, chocolate, dairy, yogurt, snacks and fresh produce.

“Plastic-free aisles are a really innovative way of testing the compostable biomaterials that offer a more environmentally friendly alternative to plastic packaging,” said Erik Does, CEO of Ekoplaza, in a statement.

Sian Sutherland, co-founder of A Plastic Planet, said Ekoplaza’s plastic-free aisle represents a “landmark moment” in the battle to reduce plastic use.

“Plastic food and drink packaging remains useful for a matter of days yet remains a destructive presence on the earth for centuries afterwards,” Sutherland said in a statement.

The plastic-free movement has been gaining traction in Europe, with several supermarket chains recently announcing plans to cut back on the use of plastic packaging. Walmart’s Asda division in the UK, for example, recently said it would eliminate single-use plastic bags by year-end, stop offering plastic straws and cups, and make all of its store-brand plastic packaging recyclable by 2025. Another leading UK retailer, Iceland, also said it would eliminate plastic packaging on its store-brand products within five years.

In its petition, Care2 says that supermarkets account for 40% of the plastic packaging used by consumers.

“While Ekoplaza is showing the Dutch that they can live without plastic in Europe, Care2 is calling on Kroger to show American consumers the same here,” the petition states. “Imagine how much of a difference Kroger could make if they opened a plastic-free aisle in all of their stores.”

A spokesperson for Kroger was not immediately available for comment.