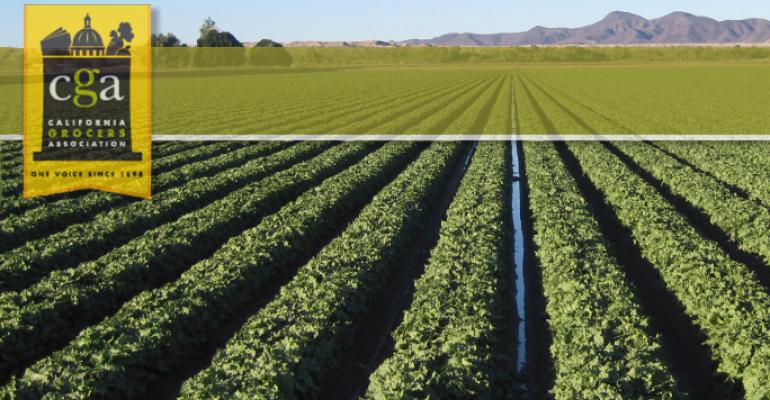 SACRAMENTO, Calif. — The California Grocers Association here has become a more effective advocate for the industry over the last five years because of a more deliberate emphasis on government relations, Ron Fong, president and chief executive officer of CGA since 2008, told SN.

Ironically for the business-oriented association, its progress has come from working extensively with a Democrat-controlled state legislature, he said.

Speaking shortly before the association’s annual convention, Fong cited three “big-ticket” issues the association is involved with at the state level in its government relations role:

• “Thoughtful reform” of minimum-wage legislation. “We want to see a thoughtful, stair-step method to increase the minimum wage — not one tied to the cost-of-living index,” Fong explained.

• Regulation of paper and plastic bags. “With close to 80 separate municipalities passing a variety of ordinances, we think it’s time for a statewide solution,” Fong said. “There’s a bill that’s still moving through the legislature — one we intend to take up again in January — that calls for a ban on plastic and a 10-cent charge for paper, which is the model most cities are passing, through we’re still negotiating some elements of the proposal.”

• Reform of Proposition 65, the law passed by California voters in 1986 that requires businesses to post signs informing consumers that certain products might contain toxic ingredients that could be potentially harmful to their health. “We want to reform the regulations that tell retailers how to comply with the law,” Fong explained. “Without reform, the language of the law is open to interpretation that could subject retailers to lawsuits.

“For example, large grocery stores might have between 80 and 100 different items that are subject to Proposition 65 warnings, but the list of ingredients covered by the law is changing on an ongoing basis, without any coordinated effort that tells businesses which products to warn consumers about and which don’t require warnings — and there are new products appearing every day — so there are a lot of options to keep up with.”

On the national level, CGA is involved with several issues, Fong said, “though we leave that work to Food Marketing Institute and the National Grocers Association.

“However, because California has such a large congressional contingent — 53 members, including 34 Democrats and 19 Republicans — “we are often asked to lobby them.” Fong said.

Fong said CGA had historically done “a little bit of everything, though government relations was never the association’s primary focus — it was just part of the full-service approach of an old-fashioned trade association.

“But in 2008 the directors of CGA issued a new directive for us to focus more on advocacy in the state capitol because they realized that, if we want to survive as an industry and get the right responses at the state and local government levels, then we need to have the voices of our members reflected,” he explained.

“Although CGA members are mostly Republican businessmen, the fact that one party controls two-thirds of the votes means the legislators can vote together on fiscal issues — even ones that require a two-thirds majority to pass — so we’ve had to figure out a way to work within that environment,” Fong explained.

“The question was, do we as an industry and an association keep blinders on and stick with the Republican/business agenda, or can we open ourselves up to do business in a very Democratic state?”

He noted that CGA supported the election of Democrat Jerry Brown for governor in 2010 over Republican Meg Whitman, “even though she was preferable to most of the members,” Fong said.

“But as an association, we did not see any way she could win, and we wanted to be sure we’d be able to stay in the game to ensure that our long-term interests would be served.

“By supporting his election, we made sure we would have the governor’s ear.”

Brown has since been “willing to work with us more so than we originally anticipated,” Fong explained. “In fact, he’s spoken to our meetings a couple of times, which says volumes about the kind of relationship we’re trying to build.”

The association expanded its meeting several years ago — under the leadership of Peter Larkin, who is now president and CEO of NGA — to become the Western Food Industry Expo, with memberships from nine Western states participating (California, Arizona, Idaho, Montana, Nevada. Oregon, Utah, Washington and Wyoming).

The convention returned to California last year and is scheduled to remain in California for the foreseeable future, with Palm Springs locked in as the location this year and in 2014, he noted.

“In the future we might go to San Diego, and we’re open to having it in any city the members like,” he added.

The convention has been re-named the CGA Strategic Conference, Fong explained, “to stress that it’s an educational event where people can learn something and that it also involves face-to-face meetings between retailers and vendors. And there’ll also be time for social interaction and fun.”

The business meetings, which were introduced in 2002, have been a good addition, Fong said.

Each lasts 20 or 40 minutes in “rooms” on the floor of a venue’s grand ballroom — with larger vendors hosting retailers in floor-to-ceiling conference suites and some retailers hosting vendors in retail review sessions in smaller cubicles.

“Members say these meetings have been very productive,” Fong said. “It’s not common for retailers, especially some of the smaller ones, to get that much vendor attention, and it’s an opportunity for everyone to meet in one place with so many of their suppliers over two days.

The theme of this year’s convention is “California Game Changers,” with the focus on three areas of change: demographics, new technology and the economy.

Attendance at the convention is expected to total more than 800 — composed o two-thirds vendors and one-third retailers — up from 750 registrants last year.