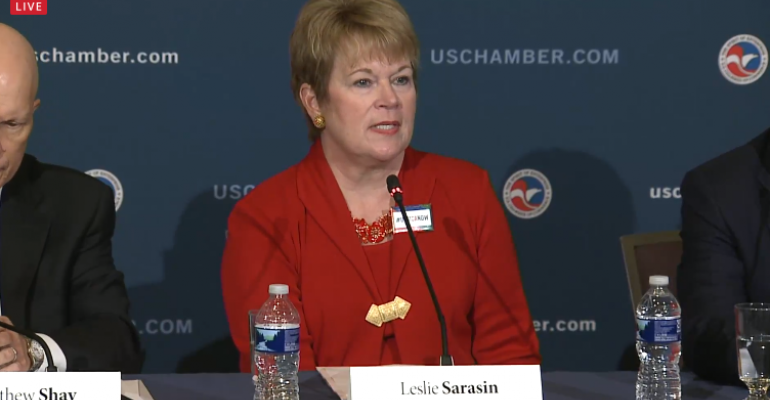 Leslie Sarasin, president and CEO of the Food Marketing Institute (FMI), today participated in a cross-industry panel hosted by the U.S. Chamber of Commerce that calls on Congress to pass the Trump administration’s U.S.-Mexico-Canada Agreement (USMCA).

The landmark trade deal, signed by the three countries at the end of November, has yet to be taken up as legislation in Congress. U.S. Trade Representative Robert Lighthizer has been engaged in talks with lawmakers to rally support for a USMCA bill, yet Democrats have pushed for a number of amendments to the deal, which would entail reopening of talks with Mexico and Canada.

President Trump has indicated his administration won’t submit a bill proposal for the USMCA until House Speaker Nancy Pelosi (D.) greenlights the agreement. Besides their objections to the deal, Democrats are hesitant to give the president a major trade victory leading into the 2020 elections.

At the U.S. Chamber of Commerce event in Washington, Sarasin and 18 other association leaders in the retail, agriculture, automotive and services industries stressed the USMCA’s importance to the nation’s economic future, saying it will provide certainty to businesses, workers and consumers. 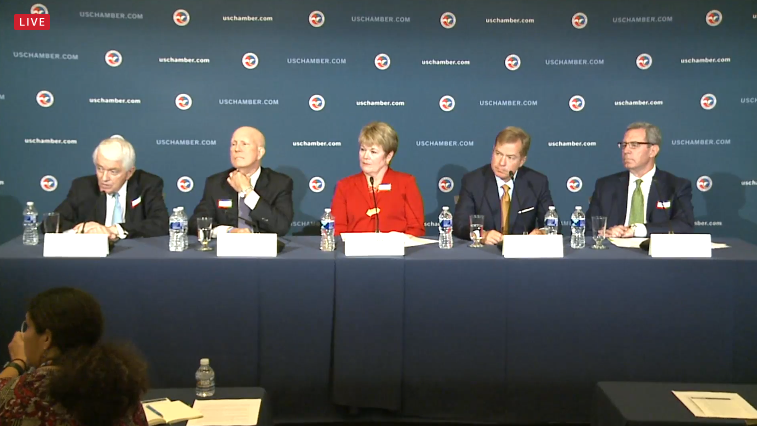 “Thanks in part to our expanded trade with Mexico and Canada, our U.S. produce departments have been transformed over the past 30 years. FMI members are now able to offer safe, high-quality and affordable fruits and vegetables year-round, and not just during the limited U.S. growing seasons,” Sarasin said in her remarks. “U.S. grocery shoppers can wander the produce section in January and find groceries that allow them to eat like it’s a June day. This transformation has taken place at the same time as new markets have opened and expanded for U.S. growers.”

Sarasin noted that the U.S. food and agriculture economy supports more than 45 million jobs and $152 billion in exports annually.

“The [U.S.-Mexico-Canada Trade Agreement] maintains and secures the existing supply chain, resulting in continued growth in U.S. food and beverage exports and strengthens our food safety efforts,” she added.

In tandem with the event, a coalition of business groups and state chambers of commerce sent a letter to Congress calling for lawmakers to back the U.S.-Mexico-Canada pact.

They underscored the three nations’ significant trade ties, noting that U.S. manufacturers export more goods to Mexico and Canada than the next 11 largest U.S. export markets combined, and the two countries represent almost a third of U.S. agricultural exports. In addition, they said over 12 million American jobs depend on trade with Canada and Mexico, and the countries are the top two export destinations for U.S. small and midsize businesses.

“Approval of USMCA will ensure U.S. manufacturers, farmers and service providers can continue to access the Canadian and Mexican markets. The new pact guarantees that virtually all U.S. exports will enter these markets tariff-free,” the letter said. “USMCA will also modernize North American trade rules. For example, when NAFTA was negotiated a quarter century ago, there was no e-commerce; consequently, the agreement did not address this sector. USMCA’s digital trade chapter sets a new, high standard, as the agreement does in areas from intellectual property protection to trade in services.”

Mexico ratified the USMCA in June, and easy approval of the agreement is expected in Canada. Pending ratification by all three countries, the 1994 North American Free Trade Agreement (NAFTA) remains in place.

The Trump administration said the USMCA will result in “more balanced, reciprocal trade” in the North American economy. That includes improved rules of origin for automobiles, trucks and other products that will “level the playing field” for U.S. workers and modernized of food and agricultural trade practices that are expected benefit American farmers, ranchers and agribusinesses.

“By creating a level playing field for trade in North America, USMCA will help U.S. companies and the workers they employ compete in our top two export markets,” the coalition’s letter said. “The case for the agreement’s approval is strong. We urge Congress to approve USMCA as soon as possible.”