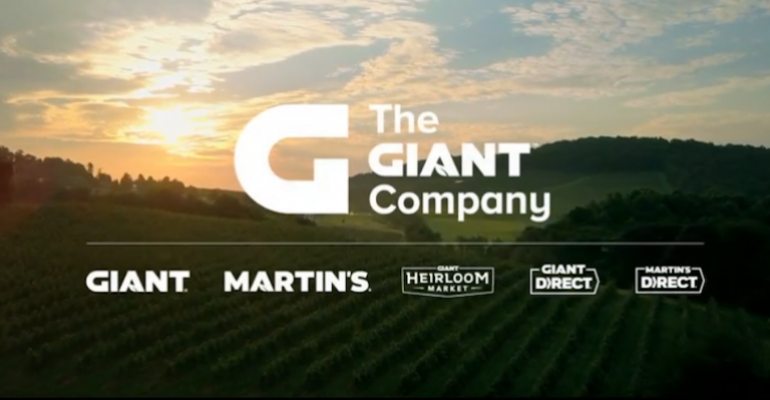 The Giant Company today launched a new television advertising campaign that spotlights people — the people it employs, serves and supports — and the value they bring to its Mid-Atlantic community.

The 30-second TV spots show current and retired employees reciting an original poem — “What Life Should Be,” by Pat A. Fleming — as their voice-over plays over a montage of images depicting Giant’s efforts to create a brighter future for the next generation. Two versions of the commercial were produced to picture the Carlisle, Pa.-based grocer’s Giant and Martin’s retail banners.

The initiative also features digital and social elements, including a website titled “Make A Difference,” a full-length version of the TV segment and videos of Giant team members talking about how the company “fulfills their purpose.”

Matt Simon, The Giant Company’s chief marketing officer, told Supermarket News that the media campaign aims to convey Giant’s personal approach and sense of responsibility in helping to make the world a better place for families and communities.

“I like to think of it as more than a TV campaign. It’s really about what our purpose is, why Giant exists,” Simon said in an interview. “Connecting families for a better future and our purpose is so personal and emotional to our team and our company that we felt it was important to find the right way to express it.”

Employees starring in the TV spot include deli manager Lovelita Jacoby, an employee since 2009 who works at the Giant supermarket in Dillsburg, Pa., checkout coach Trey Johnson, who has worked at the East Market Street Giant store in York, Pa., since 2016; and Scott Tegethoff, who recently retired after 19 years at the company, most recently as vice president of distribution operations. Giant said all were selected because they reflect the company’s purpose at their stores and in their community.

The spot also incorporates footage from Giant community partners — including the Children’s Hospital of Philadelphia, Philabundance and the Planet Bee Foundation — that focus on eliminating hunger, healing the planet and supporting children’s health and wellness.

“We wanted it to come across as real because what we’re saying is personal and, a lot of times, messages can be lost,” Simon explained. “What was important to us was to have our team members be in the spotlight and find an authentic called narrative — which was a poem — to express our purpose and show our teams, our communities and our cities in the spot. There’s nothing in that spot that’s not Giant, as you think about our purpose and how we really make a difference in communities and families.” 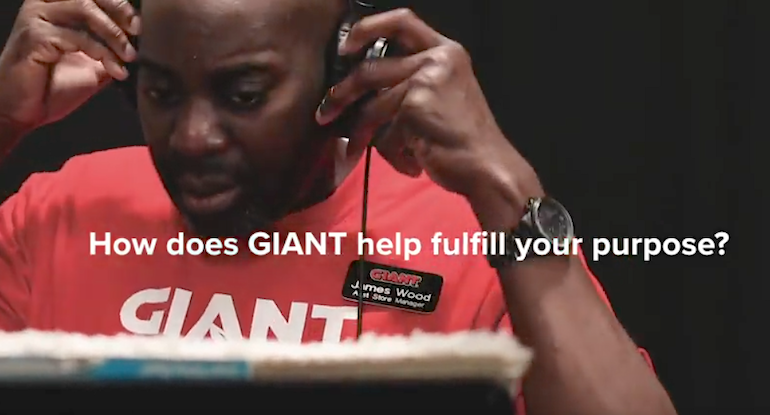 Giant assistant store manager James Wood speaks out in one of the campaign's one-on-one employee videos.

Johnson and Tegethoff also participate in one-on-one videos on the Make A Difference website, as do assistant deli manager Alyssa Murillo, with Giant since 2015; assistant store manager James Wood, at the company since 2008; and district director Kathy Sweigert, with the retailer since 2000. Wood and Sweigert also appear in the TV spot.

Amid the COVID-19 pandemic and social unrest, the campaign’s message is well-timed, according to Simon.

“Given the climate and what's happening, we want a positive message out there, a message that shows what Giant believes in,” he said. “It's more for our team members, than anybody else, to feel proud of the work they’ve done with Giant to lift the world up, and we want to bring our customers into that conversation.”

Philadelphia-based Brownstein Group, Giant’s ad agency of record, handled the creative and production for the media campaign. “The spot speaks to our shared experiences and how The Giant Company is a partner to its communities and the families it serves,” CEO Marc Brownstein said in a statement. “Our latest work together creatively expresses these values and reveals the deeper purpose The Giant Company finds within its team members and customers.”

The campaign sets the tone as Giant readies its official brand relaunch for this fall, including a more comprehensive marketing effort and new tagline, Simon said. The supermarket chain, part of Ahold Delhaize USA, changed its name from Giant Food Stores to The Giant Company in late February and rolled out updated logos for its family of retail banners, which include Giant, Martin’s and Giant Heirloom Market stores and Giant Direct and Martin’s Direct online grocery services.