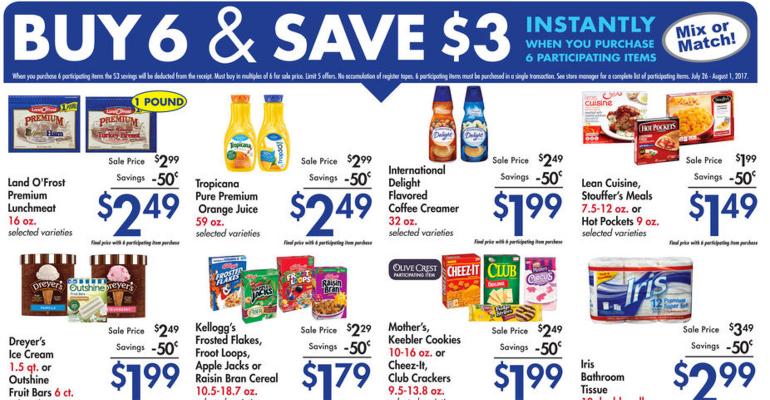 "Ads in general have heated up," as this week's Smart & Final promotion shows.
News>Marketing

Early indications from the new earnings season indicate that the deflation that has plagued food retailers for more than a year is continuing to subside, bringing relief to beleaguered same-store sales.

According to one CEO, retailers appear to be passing along their higher costs to consumers rapidly, and at the same time haven’t yet let up on the intensity of front-page promotions as they fight for traffic.

“Yeah, we definitely have turned the corner on inflation,” Dave Hirz, CEO of Smart & Final, said during a conference call late Tuesday. “It came back, most of the high-deflation categories are now inflationary – mildly, but inflationary. I'm talking about meat department, produce, dairy, cheese, some of the big categories that have been causing us pain for the last two years now became inflationary.

Promotions are picking up at Smart & Final competitors Vons (left) and Ralphs.

“We started … with competitors just looking for other ways in a deflationary environment to grow the top line, but now we're seeing inflation coming back into the mix, and we'll be anxious to see if it continues,” he told analysts. “But it's broad-based, it's not just Kroger or Albertsons or Vons or any particular [retailer], even some of the local conventional operators in Arizona, Nevada, Southern California, Northern California. Ads in general have heated up.”

Hirz said the intensity is mainly limited to “front-page” items. “It’s a handful of items every week, but just enough to make this [environment] a little more promotionally intense.”

He said he didn’t feel as though the growth of hard discounters was influencing the activity, even though Aldi and Grocery Outlet are growing quickly in the West.

“I can't speak for our competitors, but my feeling is that the intensity of the promotional environment today has nothing to do with Aldi,” he said, noting that Aldi is still too small a force in a big markets.

“I don't think [Aldi] has caused anybody to chainwide get more competitive in their ads. In fact I would tell you, Aldi is running hotter competitive ads than they do when I've competed them with the past. I think they're also trying to get sales up.”

Speaking at Supervalu’s conference call earlier Tuesday, Supervalu CEO Mark Gross declined comment on promotional activity by specific markets but offered this: “The world didn’t become less competitive though this past quarter. I think that’s pretty clear across the country.”

Viewpoint: Even the essential businesses have room to grow
Sep 15, 2020