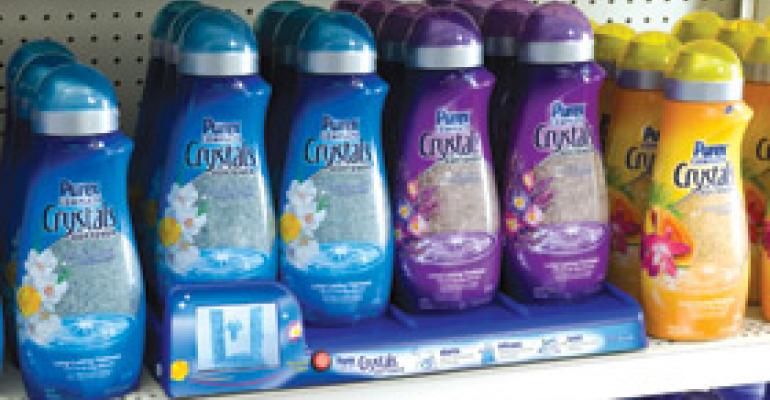 BENTONVILLE, Ark. &#8212; Mini LCD screens are making their debut in the laundry aisles of more than 3,000 Wal-Mart stores today, SN has learned. The 3-inch, high-resolution televisions are airing a 60-second commercial for Purex Complete Crystals a new fabric softener that requires explanation since it takes the form of crystals instead of liquid or dryer sheet, and can be added at the beginning of the wash

BENTONVILLE, Ark. — Mini LCD screens are making their debut in the laundry aisles of more than 3,000 Wal-Mart stores today, SN has learned.

The 3½-inch, high-resolution televisions are airing a 60-second commercial for Purex Complete Crystals — a new fabric softener that requires explanation since it takes the form of crystals instead of liquid or dryer sheet, and can be added at the beginning of the wash rather than during the rinse cycle.

“[Wal-Mart] felt that based on the need for education on the new item, this really made sense for their consumer,” Stephen Koven, senior brand manager of laundry care for Purex's parent company, Henkel North America, told SN.

The point-of-purchase experience may have also gained retailer buy-in since it involves little interference with product on the shelf.

The screen, along with a 2½-inch speaker and battery, is imbedded in a customized riser that accommodates four facings of product.

“No one wants to give up any shelf facings, so we came up with a small-form factor. There are no lost SKUs,” Steve Decker, president of the displays' provider, Zooka Creative, Sunnyvale, Calif., explained. The marketing agency has placed larger displays with 7-inch screens in the electronics departments of retail chains like Best Buy and Target, but this is the first time the technology has been brought to a grocery setting.

A blinking red light draws attention to a button on the display that instructs shoppers to “press here to learn more.” Those who do will activate the commercial and become familiar with the product, learning that the fabric softener is 92% natural, and doesn't inhibit the fire retardancy of children's sleepwear like other softeners, said Koven.

“If the consumer isn't fully understanding the product by just looking at the packaging, they have the ability to learn more,” he said.

Giving the shopper control not only cuts down on unwanted solicitations, but saves store associates from having to hear the same message continually throughout the day, noted Decker. “Most retailers don't want things playing over and over again,” he said.

The push button feature is also desirable for Henkel since it allows it to track the number of impressions and compare them to sales results. The marketer sees other advantages to the medium, like the ability to deliver a consistent message at the point where 70% of purchase decisions are made.

“We can control the message effectively by having a commercial that's customized for the at-shelf experience,” which is not the case with in-store demos, Koven said.

The LCD risers will remain on shelves for a number of months. The display is just part of an aggressive campaign designed to introduce Purex Complete Crystals.

Another element is a shelf display featuring just the audio portion of the commercial. It's unclear how many chains have agreed to accommodate the units. “We're still collaborating with multiple retail partners to bring these displays to life in a way that works best for their individual needs,” Koven said.

Other forms of in-store media have backed the Purex Complete Crystals rollout at Wal-Mart.

For four weeks, the product was displayed on endcaps in 1,250 Walmart stores and featured on Wal-Mart's Smart Network. Sales are meeting expectations, Koven said.

He does not expect the LCD risers to incite as much trial as the endcap displays, since aisles don't get as much traffic.