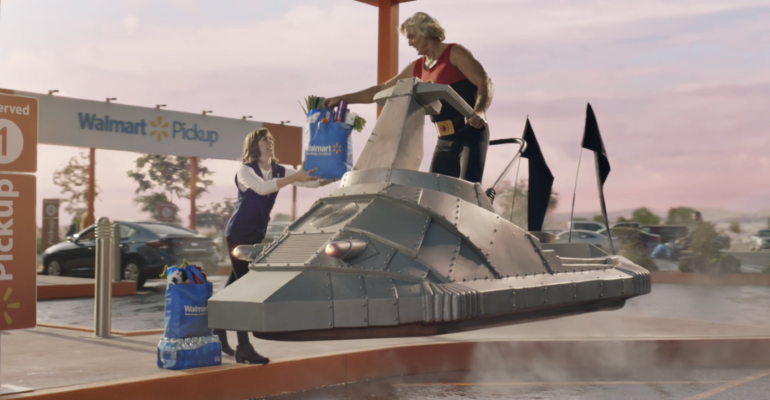 Walmart said Wednesday that it will air its first-time Super Bowl television commercial this Sunday to highlight the benefits of its expanding pickup service. Dubbed “Famous Visitors,” the campaign includes a 60-second TV spot during the game that shows 12 characters from popular movies and TV programs who “touch down on Earth” from “across the galaxy” to collect groceries and other products at Walmart curbside pickup stations.

“What better way to show off the out-of-this-world convenience of Walmart’s pickup service than the biggest television event of the year,” Janey Whiteside, executive vice president and chief customer officer at Walmart, said in a blog post. “For the first time ever, Walmart will be airing an ad during the Big Game with the help of some familiar visitors.”

“Before the game, our visitors will tease their impending arrival across a variety of media. Listen closely for their transmissions on terrestrial radio stations across the country. They’ll also take over the TV walls in our stores and our social media channels to encourage customers to use Pickup to stock up for the game. And today, we’re also dropping an extended two-minute version of our Famous Visitors commercial on YouTube,” said Whiteside.

“During the game, after our commercial airs, we’ll broadcast a special message to our visitors,” she added. “And Big Game viewers should follow our @Walmart Twitter handle during the game to see what happens as we engage with some of our visitors. After the game, we’ll continue marketing efforts with new, additional content.”

In its most recently completed quarter, Walmart saw e-commerce sales jump 41%, with Chief Financial Officer Brett Biggs calling grocery pickup and delivery a “meaningful contributor to overall e-commerce growth.” As of the end of 2019, Walmart had rolled out free same-day grocery pickup service to more than 3,100 stores and same-day grocery delivery to over 1,600 stores.

“We’re excited to show tens of millions of viewers who tune in to the Big Game how our pickup service can reinvent their shopping experience and add much-needed time back into their day,” Whiteside said in her blog.