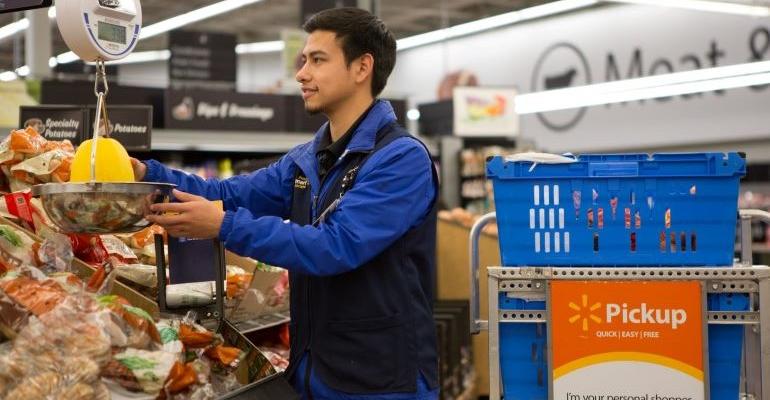 Consolidated net income attributable to Walmart came in at $3.29 billion, or $1.15 per diluted share, compared with $1.71 billion, or 58 cents per diluted share, a year ago. Adjusted net EPS, reflecting unrealized gains/losses from the company’s JD.com investment and a noncash impairment charge on the Jabong.com trade name, were $1.16 versus $1.08 in the fiscal 2019 quarter.

On average, analysts had forecast adjusted EPS of $1.09, with projections ranging from a low of $1.05 to a high of $1.15, according to Refinitiv/Thomson Reuters. 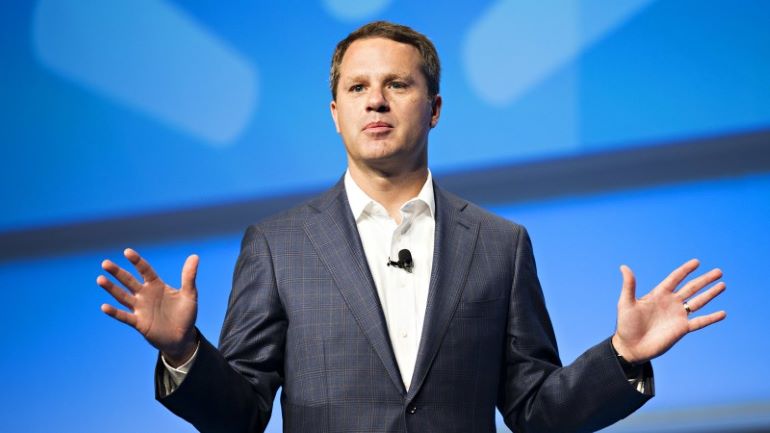 “The sales environment in the U.S. continues to be positive, while internationally its softer and we’re responding appropriately,” Walmart President and CEO Doug McMillon (above) told analysts in a conference call Thursday.

“Our work to create a seamless omnichannel experience for customers continues. They want us to save them time as well as money,” he said. “You can measure our progress in a number of areas, including online grocery, where we now offer pickup, delivery or both in nearly a dozen countries — including the U.S., where we now have more than 3,000 locations for pickup and more than 1,400 locations that offer delivery. We’re learning a lot as we expand these services. We’ll use this knowledge to inform the new capabilities we build and deepen our relationship with customers.”

“We continue to see good traffic in our stores. We’re growing market share in key food and consumables categories, including fresh, and we had positive comps in general merchandise,” McMillon said. “Comp sales growth of 3.2%, along with good expense management, helped us leverage SG&A, particularly in physical stores, even as we made investments in price. This led to growth in operating income for the sixth consecutive quarter. On a two-year stack, comp sales of 6.6% are among the best we’ve seen in a number of years.”

Biggs also pointed to grocery as a standout category in the quarter. “Fresh food was particularly strong this quarter, with mid-single-digit comp sales growth, as improvements in areas like bakery and meats are resonating with customers We’ve focused on improving fresh presentation and product quality, and this has resulted in stronger sales and market share gains, according to Nielsen,” he said in the call. “Private-brand sales continue to be strong, with increased penetration versus last year. We saw modest deflation in food, as our price investments negatively affected ticket this quarter, but consumables’ inflation increased modestly year over year.”

Walmart U.S. e-commerce sales jumped 41% at the top line and were up 1.7% on a comparable basis for the third quarter.

“In e-commerce, we had our best quarter of sales growth this year, up 41%. Customers are enjoying the convenience of grocery pickup and delivery, and this service was a meaningful contributor to overall e-commerce growth,” according to Biggs. 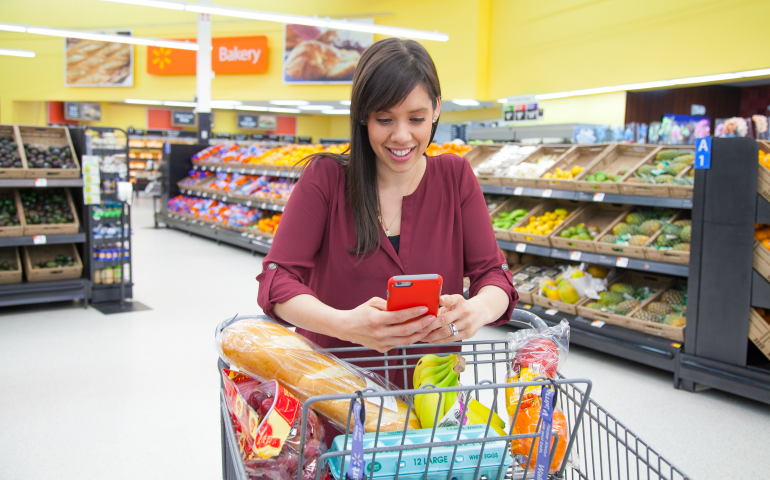 By the end of this year, Walmart expects to offer free same-day grocery pickup from more than 3,100 stores and same-day grocery delivery from over 1,600 stores. “We’re also pleased with the early response to the recently launched Delivery Unlimited membership program,” said Biggs. “During the quarter, we took convenience to a whole new level with the launch of the In-Home Delivery pilot. Now more than 1 million U.S. customers in three markets can have their online grocery orders placed all the way into their refrigerators. We think this could be a winning proposition as we expand our relationship with more families and grow our share of wallet.” He added that Walmart now reachs more than 75% of the U.S. population with its NextDay delivery service, launched in May.

McMillon noted that Walmart also is working to bring its success in grocery to more profitable categories.

“Our strength is being driven by food, which is good, but we need even more progress on Walmart.com with general merchandise. We’re mixing the business out better to achieve better margin rates, but there is more work to do,” he explained. “We’re committed to progress and building a larger, healthier e-commerce business. Our customers want that, our marketplace sellers want that and so do we. Grocery pickup and delivery, along with new offerings like Unlimited Delivery and InHome Delivery, will help us unlock advantages we have to serve customers in a way that reduces friction and enhances convenience. We need to translate this repetitive food and consumable volume into a stronger Walmart.com business that’s profitable over time, so that’s what we’re working on.”

For the third quarter at Sam’s Club, net sales inched up 0.7% to $14.63 billion from $14.52 billion a year earlier. Comp-store sales grew 0.8% (0.6% excluding fuel). Transactions were up 5.7% year over year, but ticket size was down 5.1%. Walmart noted that reduced tobacco sales negatively affected comp-store sales by 350 basis points. 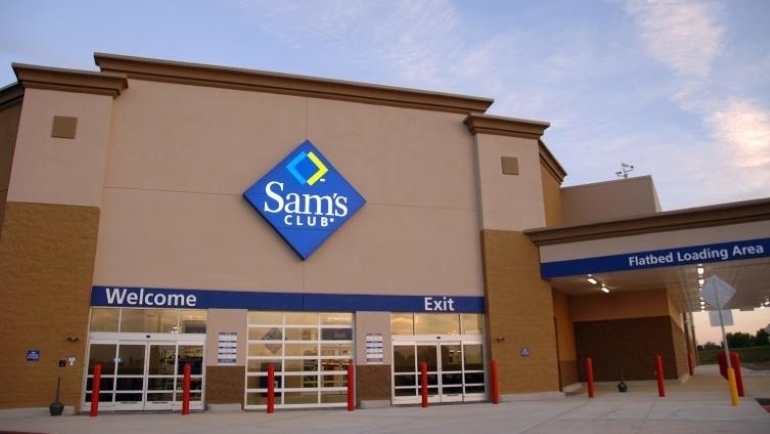 “Momentum continued at Sam’s Club this quarter, with strong comp sales and membership income growth,” Biggs said. He noted that comp sales excluding fuel and tobacco increased 4.1% and, on a two-year stacked basis, were up 9.8%, among the strongest results for Sam’s in recent years.

“Members are responding to the omnichannel strategy, as club comp transactions were strong with a 5.7% increase and e-commerce sales grew 32%. We’re pleased with the membership trends we’re seeing at Sam’s, as member counts and renewal rates increased, including Plus membership. In fact, membership income was up 3.1% in the quarter, the highest growth in three-and-a-half years,” Biggs said. “Operating income was pressured in part by accelerated strategic investments in price, technology investments and the growth of e-commerce.”

During the analyst call, McMillon also applauded Greg Foran, who as of Nov. 1 was succeeded as Walmart U.S. president and CEO by John Furner, president and CEO of Sam’s Club. Plans call for Foran to stay on at Walmart through Jan. 31 to help with the transition. Foran, who has been chief executive of Walmart U.S. since August 2014, is joining Air New Zealand Ltd. as CEO.

“Let me take a minute to pass on a huge thank you to Greg Foran for his incredible service to our associates and customers during a successful five-year run as head of Walmart U.S. His judgment, hard work and leadership created a better store experience for customers and positive comp sales in each quarter under his leadership,” said McMillon. “With Greg’s departure, we are excited to have John Furner take the reins as the new leader for Walmart U.S. I’m confident John will continue the momentum the team has established. The diverse roles he’s held in the company for more than 25 years has given him the experience and judgment to know what we should continue doing and what we should change as he leads this business into the future.”