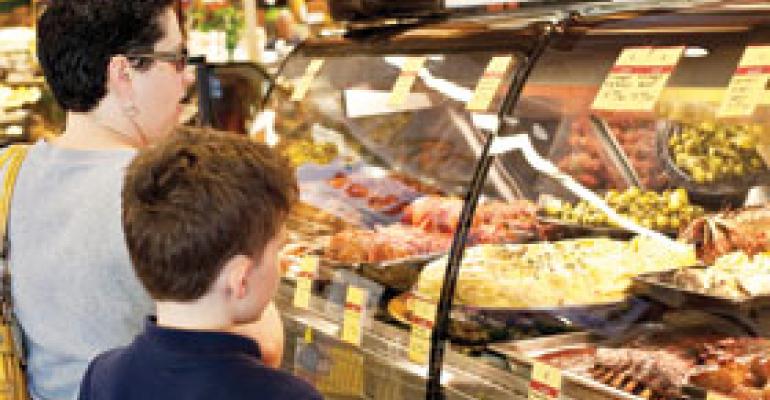 With its well-honed barbecue program, Lamb's Thriftway stands out in the marketplace, and now it's looking to make a good thing better. At one of its largest stores, the five-unit, Portland, Ore-based retailer is guiding an entire remodel around its barbecue grill there. We're bringing it up front, and expanding it, said Bob Lamb, owner of Lamb's. What better evidence of our commitment to the barbecue

With its well-honed barbecue program, Lamb's Thriftway stands out in the marketplace, and now it's looking to make a good thing better.

At one of its largest stores, the five-unit, Portland, Ore-based retailer is guiding an entire remodel around its barbecue grill there.

“We're bringing it up front, and expanding it,” said Bob Lamb, owner of Lamb's. “What better evidence of our commitment to the barbecue program can there be than to do a major remodel around the grill? We're doubling space for it, and making it the focal point.”

When a bank that had been situated at the front of the store recently moved out, Lamb and his management team jumped on the opportunity to make the most of the vacant space. Doing so, they said, meant bringing the chain's already locally revered barbecue grill to the front where customers will see it first thing.

Right now, the grill at that store stands across the aisle from the deli department, which is about halfway up the first leg of the traffic pattern.

Lamb puts so much importance and emphasis on the barbecue grill because he credits it with increasing storewide sales.

“The grills bring people into the store daily,” he said.

At a smaller Lamb's Thriftway store down the road, where the barbecue grill is at the front right just inside the door, sales are particularly brisk.

Counted in with deli, which features a well-developed chilled, prepared-food program, the two — deli and barbecue — make up at least 13% of store sales at the 24,000-square-foot store in Lake Oswego, just south of Portland.

And, during the worst months of the recession, when store sales dropped, Lamb's barbecue grills experienced only a fraction of the sales dip other departments felt.

Officials credited the grills' uniqueness for its steady sales.

“I attribute it to its being a point of difference, and a destination,” Staffenson said. “Nobody else in our market area is doing this. Our customers know they can't get this anywhere else.”

The grills, about four times the size of a backyard gas grill, are powered by electricity and burn wood pellets.

“They're sort of a combination of a grill and a smoker. They look like an open grill, but cook slowly and evenly like a smoker,” Staffenson said.

At the Lake Oswego store, two of the grills are set side by side. Usually, one is slow-cooking ribs and tri-tips that have been vacuum-tumbled in a signature marinade, while the other one is cooking cedar-planked salmon and other seafood.

It's not just the barbecue program itself that's so different in this marketplace. It's also the way Lamb's has listened to its customers, and then implemented many of their suggestions, that has contributed to a sure-fire success, local observers told SN.

At each store, menu changes, hours of the grill's operation and sometimes the choice of specials, even on what day of the week they're offered, all have been customer-driven.

“If you just listen to your customers, they'll tell you what they want,” Lamb said. “The customer's wants and needs are continuously changing, and you've got to change along with them.”

Lamb carries that philosophy throughout his business, and it has served him well in a highly competitive market that includes Albertsons, Safeway, Wal-Mart, WinCo, Fred Meyer and Costco stores.

Listening closely to his customers is what got Bob Lamb into the barbecue business in the first place, he said. At the Lake Oswego store, he started out grilling outside in the parking lot on weekends, and customer response was so positive, it spurred him on.

He decided to buy a large, easy-to-use grill, one that would replicate outdoor cooking, aromas and all, and get it installed inside the store.

Soon, he had the grills installed in all his stores, and the aroma of hickory- or mesquite-grilled meat was wafting throughout the stores and out into the parking lot.

That was a while back when a lot of supermarkets were still just experimenting with home meal replacement, and were not quite sure how much of an investment they wanted to make in it.

But Lamb saw opportunity looming. He said he was very aware that in the areas in which his stores were located, most families had both husband and wife working outside the home, leaving little time for meal planning, and unable to afford to eat out at a restaurant every night.

“I wanted to give them restaurant-quality food that they could take home and put on the table — good food that would cost them less than it would if they went out to eat in a restaurant,” Lamb said.

He sees the barbecue grill filling customers' needs now, but also expects it to open doors to other opportunities, he said.

“It's a viable, long-term program that brings people into the store, and they see what else we can offer.”

Some of the programs — such as its barbecue program and a catering program — offered by Lamb's can't be advertised in Thriftway circulars because they're particular to this one retailer. So in-store signage and interaction with customers in the store are especially important.

“In fact, the interaction the grill person has with customers, I think, is key to such good sales,” said Staffenson.

Each store has one person dedicated to the barbecue grill. The grill person — that's his or her major assignment — gets comfortable with all aspects of the program, including prep and clean up. They also gain the experience to exercise quick judgment when needed, get to know customers by name and also encourage customers to offer their suggestions and comments.

One of the Lake Oswego store's regular customers told SN he enjoys buying food at the grill.

“It's just fun to walk in and see what Mike [the grillman at the store] has cooked up that day,” said Tom Newton, a local resident, who buys something from the grill at least one or two times a week. “Mike has such an engaging personality. It feels like he's cooking just for you.”

Newton commented, too, on the variety of items available from the grill.

“I particularly like the salmon, but they make some really good beef things, too. Like brisket, and they do steaks. It's an incredible cooking method they use.”

Starting out with tri-tips vacuum-tumbled in the meat department, the grill program now offers — in addition to tri-tips — baby back ribs, spare ribs, chicken, planked salmon, even steaks cooked to order, seven days a week.

“We also have specials on particular days of the week, such as pot roast on Mondays and prime ribs on Fridays,” Staffenson said. “But everyday, our staples are tri-tips, ribs and salmon.”

Prime rib on Fridays was requested by customers. So was the pot roast.

Mac-and-cheese was a recent side dish offered at the grill, and customers have told Mike they want that to become a regular. Generally, a starch and more than one vegetable is offered hot at the grill.

Surprisingly, brussels sprouts are a customer favorite. It could be the store-made sauce they're served in that has boosted their popularity, Staffenson said.

The adjacent deli also offers a large selection of chilled entrees and sides and salads.

Chilled, prepared foods, most of them made in-store, have been featured in the deli for a long time, but the barbecue program has become the backbone of the deli, accounting for up to a quarter of the department's sales.

“That aroma, and having the food prepared right in front of you, just can't be beat,” Newton said. “I can get steaks medium rare and baked potatoes. I don't think any of the other [grocery] stores around here can compete with that.”

A local blogger recently told his readers that he thinks barbecued tri-tips from Lamb's Wilsonville store are some of the best he's ever eaten, and he showed surprise that he could give such praise to barbecue made at a grocery store.

With back-to-school season here again, Lamb's is making room on its grills for more pot roasts and meat loaves because parents will be packing lunches for their kids to take to school.

“Customers have reminded us sliced pot roast is great for sandwiches,” Staffenson said.

Bob Lamb foresees a day in the future when customers will come in and buy their whole week's meals from the barbecue. Some of the meals would be fresh off the grill, and some would be frozen.

“We have enough variety to make that happen.”