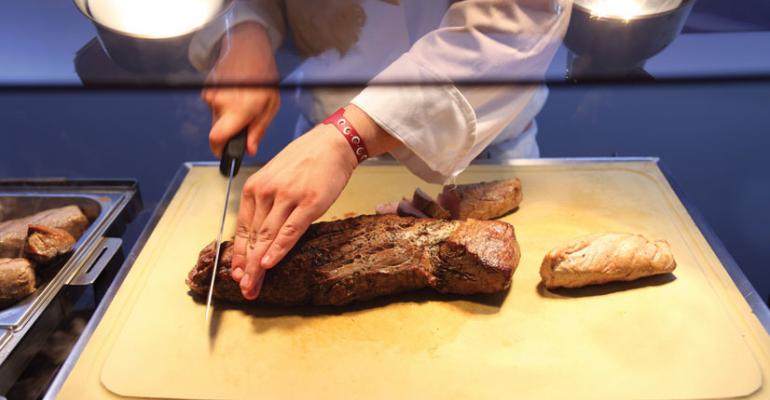 Supermarkets have ramped up chopping, assembling and cooking out in the open to assure customers food is prepared on the spot

Grilling outside and in, firing up wood-burning ovens, featuring carving stations, and taking down kitchen walls — these tactics are working well for supermarkets’ prepared food departments.

It’s not new that many retailers’ foodservice programs have evolved into restaurant-like operations, but they’re turning up the burner.

Festival Foods, Onalaska, Wis., has for a long time held special events outside in its parking lots, and during the summer, they usually involve grilling.

“Thursday, leading up to the holiday weekend, we had a Rib Event,” Lars Batzel, deli director for the 17-unit chain, told SN. “We figured it would get people into the feeling of the three-day weekend.”

The first this year was held in April, and it will be a monthly event right through September, Batzel said.

Customers, he said, were enthusiastic even though the weather hasn’t been ideal for either of the events so far.

“The wind was so cutting [in April] it was pulling down banners and signs.”

Batzel said he didn’t have sales figures yet for the May event, but in April even in less than pleasant weather, the company sold 4,500 racks of ribs at $10 a rack, and $5 for half a rack.

“For the grilling events, we set up a tent outside, and we sell coleslaw and potato and macaroni salad also, along with the ribs,” Batzel said. “Ribs are the focus, but we sell a lot of combos, too. That’s a full rack with two sides, for $15.”

Loyal customers have been coming to Lamb’s Thriftway, Portland, Ore., for a long time for tri-tips, planked salmon and other entrees that waft aromas across the store as they sear on special indoor grills. Lamb’s invested in the expensive grills that are powered by electricity and burn wood pellets a few years ago, and they’ve more than paid their dues, said Bob Lamb, owner of the five-unit independent. So well, in fact, that just recently, the company dedicated a grilling area, separate from the deli, in a remodel, and added an espresso coffee bar and seating there, pumping up business even more.

Now, based on its sales success with lunch and dinner, Lamb’s has added easy-to-take-away breakfast items to its grill menu.

Other retailers have fired up their grills completely away from their stores, undoubtedly alerting potential new customers to the fresh food they have to offer.

“We sold lots of barbecued chicken quarters at the city park on Memorial Day,” Patrick Ptacek, one of the owners of single-unit Ptacek’s said.

He added that he had run out of chicken parts by 1 p.m., and had more brought over from the store.

The store’s huge gas grill, which can handle 1,000 pounds of meat at a time, is towed to various sites for special events.

“We grill every day at the store. The grills are actually out back, but when customers walk into the store, they smell the smoke, the aroma,” Ptacek said. “We have particular grill nights. For example, Thursday is rib night. Customers can count on that.”

A seating area, with Wi-Fi and complimentary coffee, adds ambiance to the store’s foodservice department.

At Festival Foods, there may not be a grilling event every day, but a carving station draws attention every weekend.

“Every Saturday and Sunday, we’re carving a hot ham or hot turkey for sandwiches all day,” Batzel said, adding that the carved meat also is sold by the pound. “With that, the customer gets six hard rolls.”

“Every evening, we’re offering samples of prime rib or stuffed pork roast or something else, at a carving station,” Acierno said. “We have our chef, wearing his chef’s hat, out there offering customers a taste.”

While Joseph’s Classic is a gourmet Italian specialty store, not a supermarket, it’s no less important to show customers that all the food is made right there from scratch, Acierno explained.

“It [the food] is all restaurant quality. In fact, we’re more like a restaurant, but all the food is taken out.”

Acierno added that since Joseph’s Classic Market does demoing all the time, he has a significant advantage over restaurants.

“When you go out to eat in a restaurant, you don’t get to taste something before you order it.”

Other retailers do a number of restaurant-like things to draw attention to their fresh food preparation.

A prepared food area/kitchen that is the centerpiece of Orchard Fresh shows off a wood-burning pizza oven right where customers can see the pizzas being prepared.

Other concepts in the same area, such as made-to-order sandwiches, build-your-own salads and a cheese counter specializing in hand-cut cheeses, speak of freshness.

“We like the theater aspect of the whole thing,” Kevin Donovan, Orchard Fresh director, told SN in an earlier interview. “That’s why it is in the middle of the store.”

The prepared food at Orchard Fresh includes a Bistro Meal, made from scratch, which comes with two side dishes with any entree for an extra $4.

“This sandwich counter gets rocked every day at lunch and dinner,” said Erin Horton, Orchard Fresh executive chef, noting that all the bread used is baked in the store. The menu includes about 30 sandwiches, eight of which are featured each day.

Meanwhile, McCaffrey’s, a four-unit independent based in Langhorne, Pa., has continued “family” nights in its prepared food departments — with themes such as Italian, All-American, etc., which have a restaurant-like quality to them.

In the last year, the company revamped a seating area at one store that gets very crowded on family nights, said Mark Eckhouse, McCaffrey’s vice president.

Retailers and other industry sources agree that “theater” pays off for any store that offers prepared food.

SN Blog: Prepared for Next Phase of Prepared Foods?

“We do like the appeal of this [creating some theater by cooking in front of customers] as we think it gives the appearance to the guest of our food being the freshest it can be,” said Diane Earle, senior director prepared foods, United Supermarkets, Lubbock, Texas.

Consultant Brian Salus, who has worked with supermarkets here and in the U.K., underscored the importance of theater cooking for supermarkets.

“Open production and fresh performance preparation are key ingredients in conveying to the consumer that here is where the good, fresh food is,” said Salus, founder and president of Salus & Associates, Mathews, Va.

“Consumers love to watch their food being prepared and some retailers … keep pushing the envelope. The idea here is not a once-and-done concept but a building block of activities that capture a consumer fan base looking for great food at a fair value.”

Salus pointed out, too, that such theatrical cooking can benefit the whole store because it creates a halo effect.