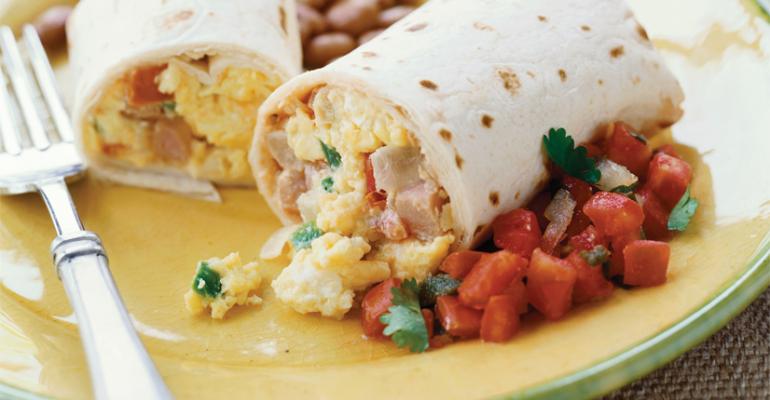 Rise and Shine for Supermarket Breakfast

In prepared food departments, breakfast still is a distant third to lunch and dinner

Breakfast offerings are growing at restaurants, especially in the quick-service segment, but the meal isn’t a mainstay in most supermarket prepared food departments.

Industry analysts say there are several challenges to opening for breakfast for restaurant operators, and these challenges can be even more difficult to overcome for supermarkets.

Hy-Vee Food Stores, however, has enjoyed a successful breakfast program for 35 years.

“Breakfast has been a significant piece of our business model for years, and we have a solid reputation for both quality and value in the customers’ minds,” said Brooke Barnes, director of restaurant development at Hy-Vee.

Throughout the week, Hy-Vee has good, steady breakfast traffic, according to Barnes.

“We have a full sit-down area, but of course people can take it to go if they prefer.”

The breakfast menu, composed of items like eggs, hash browns, French toast, omelets, breakfast burritos, breakfast sandwiches and skillets, are priced for value from $2 to $7.99.

“The most popular breakfast items would be the breakfast traditional of two eggs, cooked to order, golden hash browns, and choice of meat — bacon, sausage patties or links — and toast.”

Although the classic breakfast remains important to Hy-Vee customers, the chain has made sure to develop new items.

“Over the past 35 years, our menu has evolved,” said Barnes.

“We’ve stayed with the traditional offerings, but in recent years we kept our focus on quality while adding a variety of things such as breakfast sandwiches — the Texas 2-Hand and the Breakfast Deli Stack — and all the way to adding larger breakfast items such as our skillet breakfast, our Hy-Five [pancakes, eggs, bacon, sausage and hash browns] and larger omelets.”

Hy-Vee’s menu has four breakfast sandwiches. The Texas 2-Hand is made with two eggs, two slices of bacon, cheese and Texas toast, and the Breakfast Deli Stack is made with scrambled eggs, sautéed peppers, onions, cheese and a grilled bagel.

Traditionally, Hy-Vee customers have ordered fresh breakfast at the counter, and the meal was brought to their table.

“Brunch has been a great, great thing for us. It’s been very popular,” said Barnes.

The brunch menu includes special items like the make-your-own eggs Benedict and omelet station, as well as Bloody Marys and mimosas.

For most supermarkets, though, breakfast doesn’t draw a crowd.

“Since 2008 at the beginning of the recession, looking at retail prepared foods eaten at home, morning meals are 10% of those visits and it’s only grown by 2%. I think it probably does not compete against QSRs as some other day parts,” said Bonnie Riggs, NPD restaurant industry analyst.

Lunch, on the other hand, has a lot of potential for growth. Lunch represents 20% of prepared food visits with 29% growth since 2008, according to a new prepared foods report by NPD Group.

“That is definitely stealing visits from restaurants,” Riggs, said.

Dinner, too, has been taking away business from quick-service restaurants. The meal represents 35% of visits, with 9% growth since 2008, according to NPD.

“Really where the growth is, is in at-home lunch and supper meals,” said Riggs.

“In all of our work around supermarket prepared foods, the numbers haven’t changed that much as far as the percentage when you look at the day parts that breakfast makes up. It’s consistently in the single digits,” said Hanson, a principal at the consulting group.

As for breakfast stagnation at supermarkets, Hanson pointed to several factors that make capturing the breakfast prepared foods consumer a challenge. The biggest is probably the nature of the store format. Supermarkets aren’t designed for extremely quick trips.

“And the fact is when you want to go to a supermarket to buy something for breakfast you’ve got to park in a big parking lot, you’ve got to find your way into the store, you’ve got to navigate, you’re looking for the right item,” said Hanson.

“For a consumer, for breakfast, given what they can get elsewhere, spending 5, 6, 7, 8 minutes in a supermarket picking out your breakfast is time prohibitive,” Hanson explained, adding that the alternative is a 90-second drive-through or convenience store trip.

Plus, Hanson pointed out that breakfast is a very routine meal, where consumers have established habits.

That’s not to say it’s all bad news for breakfast at supermarkets. Nielsen has been seeing growth over the 52 weeks ending July 27.

“I’m noticing that in not only in dollars, but volume as well, that they’re up double digits across the total U.S. So it is gaining traction within the retail space,” said Sarah Schmansky, director of account services at Nielsen Perishables Group.

“And I think really where we’re seeing a lot of innovation in products is really being driven by two things: meals on the go and healthy options.”

“Those are really driving category dollar and volume growth. Just in the latest 52 weeks, volume is up 64% just in that subcategory.”

“Retailers are definitely taking some of the trends that are happening in the local coffee shops and the fast-food chains, ” Schmansky said. Supermarkets are offering more healthier breakfast options like granola, yogurt parfaits, customizable oatmeal and hard-boiled eggs, according to Schmansky.

“It accounts for $15 per store, per week, within the industry, but it is double digits in both dollars and volume as well,” Schmansky.

“Having the unique assortments that are not only quick to pick up, but also a healthy option is definitely something customers are looking for. I think really the success factor is being able to compete with that convenience factor of Starbucks and Dunkin’ Donuts.”

Despite these small gains, there’s no denying that restaurants remain the heavy hitters in the breakfast space.

Webster said that is somewhat of a generalization, but that most restaurant operators that aren’t in the breakfast arena are looking to be.

This boom in breakfast was likely spurred in part by the recession.

“One of the primary things is during the recession people started cutting back, they had less money to spend eating out. Breakfast is one of the least expensive, away-from-home options,” said Webster.

For breakfast, consumers are looking for portable meals they can pick up quickly, with good value, according to Hanson. These attributes develop daily habits, which often form around coffee programs, he said.

McDonald’s sets the agenda around foodservice breakfast. The retailer now offers an early breakfast from midnight to 4 a.m., serving customers who are looking for a meal during an unconventional time frame.

“So that extension has been a big deal, and I think the more McDonald’s does with that the more you’ll see other people do that. We also in a lot of our consumer work have seen that consumers want the hours extended. Consumers are big fans of breakfast food, they’re big fans of value, so what they are saying to operators is we want to extend those hours,” said Technomic’s Hanson.

Hanson said the restaurant industry has long speculated about the effects of McDonald’s moving to an all-day breakfast.

“And more recently in the last six months, we’ve seen the president of McDonald’s for one of the first times publicly mention there’s consideration for going to an all-day breakfast.”

In addition to longer breakfast hours, the assortment of breakfast offerings is expanding at restaurants.

While Webster said breakfast is still the most conservative day part in terms of experimentation, she said things are starting to change. QSRs are offering lunch- and dinner-inspired breakfast, such as breakfast BLTs and breakfast clubs, as well as new Mexican-inspired meals and some Mediterranean and Asian flavors.

“So it’s not just the breakfast burrito, which has been around for a long time, but you’re seeing more breakfast tacos and quesadillas,” said Webster.

Convenience stores, which continue to have a strong presence in the breakfast segment, have also picked up on the Hispanic-inspired meals, such as 7-Eleven’s breakfast empanada bites and Wawa’s breakfast quesadillas, said Hanson.

Portability and flavor are key to c-store breakfast success, he noted.

“From a retail standpoint, certainly many consumers are looking at convenience stores and what they’re doing from a breakfast program standpoint.

Hy-Vee uses breakfast as a way to show appreciation for veterans each year.

“For over 10 years, we’ve been doing a free breakfast for veterans [on Veterans Day]. We set up a nice style breakfast in honor of veterans and their service to our country,” said Brooke Barnes, director of restaurant development.

“And each year we serve more and more, but in recent years the numbers have been about 70,000 that we have honored.”

Hy-Vee managers are often enthusiastic about participating in the event.

“There’s not much they’d rather do than serve the people that served us. And each year we have employees that are just begging to work that day.”