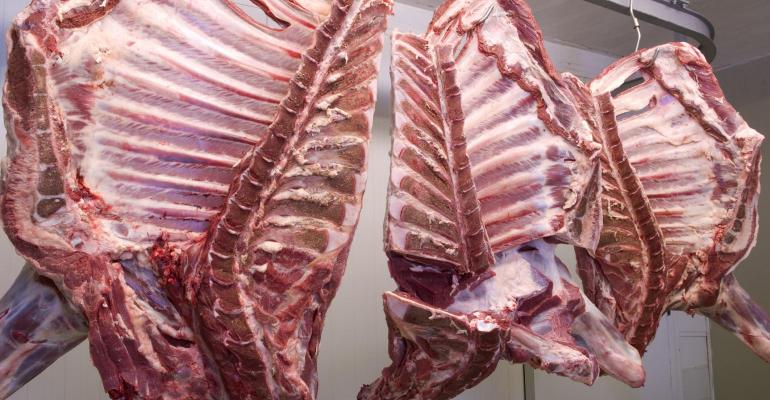 yesimersan/iStock/Thinkstock
Wholesale cutout values have been increasingly lower in recent weeks compared to year-ago levels, and current wholesale values for all beef primals are lower year over year.
Product Categories>Meat

It’s too early to tell if COVID-19 has negatively affected beef demand, but Oklahoma State University Extension livestock marketing specialist Derrell Peel said it is certainly possible, especially on the export side. Impacts on domestic demand, however, may be yet to come, he added.

“It will be important to watch both demand and supply in the coming weeks to see if the current beef and cattle market expectations will have to be revised significantly,” Peel said. “There are a multitude of market factors to sort out, including: new trade agreements, macroeconomic changes (stock market, interest rates, etc.), exchange rates, African swine fever and others that will make it more difficult to determine the more direct impacts of COVID-19 on international and domestic beef markets.”

Related: How will the fear of a coronavirus-based recession affect meat sales?

Peel explained that wholesale beef prices typically increase seasonally from February into March, but they have shown only slight improvement from the February low three weeks ago.

Related: Demand for meat stays strong, with more than $50 billion in sales for 2019

Additionally, he said wholesale cutout values have been increasingly lower in recent weeks compared to year-ago levels, and current wholesale values for all beef primals are lower year over year.

The Select boxed beef cutout value has also been lower, at $201.80/cwt. last week, down 7.5% year over year. Peel explained that the general pattern of year-to-year comparisons for Select beef primals is similar to Choice primals in that all Select primals are lower versus the year before.

According to Peel, the Choice-Select spread reached a seasonal low in late January of $1.92/cwt. on a weekly basis -- two weeks earlier than the usual mid-February low. The spread has improved seasonally since then, reaching $5.14/cwt. during the first week of March.

“The Choice-Select spread typically increases to the first of two seasonal peaks in late May or early June before dropping in the summer and bouncing back again in the fourth quarter of the year,” he said.

However, Peel said weakness in boxed beef prices does not necessarily mean that beef demand is lower, especially since beef production was up 5.1% year over year for the first eight weeks of 2020.

“Beef prices would normally be pressured with higher beef production, even with stable demand,” he explained.

The increased beef production, Peel said, is the result of a 1.3% year-over-year increase in cattle slaughter plus increased carcass weights. Steer and heifer slaughter is up 0.7% for the year to date, and steer carcasses have been averaging 19.6 lb. heavier year over year, while heifer carcasses are averaging 10.6 lb. heavier.