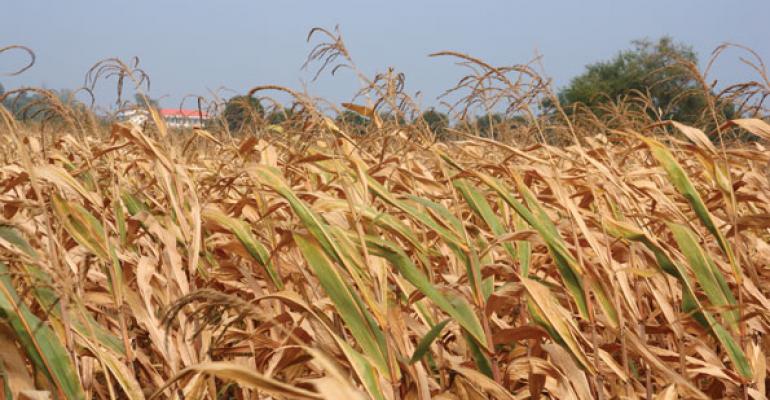 <p> A drought across the Midwest has damaged feed corn crops.</p>

WASHINGTON — Meat prices were already at historic levels, but the ongoing drought in the Midwest will likely bring even heftier long-term price tags.

Feed corn yields have been significantly hurt by the drought. The U.S. Department of Agriculture forecast a 1.8 billion bushel decrease in corn supplies in its July 11 World Agricultural Supply Estimates report. USDA noted this drop in feed corn supplies will ramp up feed prices and will temper the weight of animals brought to slaughter. The agency also reduced its meat and poultry production forecasts for 2012 and 2013.

However, the higher cost of feed might actually increase meat production and bring prices down over the next few months.

“In the short run, in the next three to six months you might actually see more meat production basically as they pull animals forward [with slightly less] ... weight on market hogs and more cattle being placed early and finished early and so forth, which would actually will increase meat production and therefore retail, wholesale prices might come down a little bit over the next six months,” said Glynn Tonsor, assistant professor of agricultural economics at Kansas State University.

SN Poll: Are the effects of the drought being felt in your store?

After the next few months, Tonsor expects the fewer animals, processed at lower rates due to feed costs, will drive up wholesale and retail prices.

The drought comes at a time when beef supplies were already tight, Tonsor pointed out. “There’s lots of discussion within the beef industry … if and when we’re going to have expansion of the herd with more cows and this certainly is delaying that story,” Tonsor said. “It’s hard to expand the herd when two-thirds of the country is under drought.”

Price increases on meat products will not be welcomed by customers who are still watching their wallets.

Consumers had already been limiting their meat purchases, Tonsor said, and this expected increase in prices is likely to continue that trend.

Refresh blog: Can the Industry Handle the Drought?

“As we continue to have higher retail prices, which have muted some since earlier this year, but regardless, historically they’re high to a lot of households, it’s definitely changing. Certain households are consuming less meat than they did before,” he said.

The limited grain and corn supply will also affect the price of production for the many consumer processed goods that use these ingredients. Milk production, too, will be impacted by a smaller cow herd, with less yield per cow.

“Milk per cow is also reduced due to higher forecast feed prices this year and next. In addition, milk yields in the short term may be affected by recent high temperatures,” USDA wrote.

As of last week, there was no sign of rain for most of the corn belt.

In an agricultural weather and drought update on July 17, the USDA said that the entire country was expected to have “a hotter and drier than normal weather pattern” for the week of July 22 with only the Southeast having any drought relief.