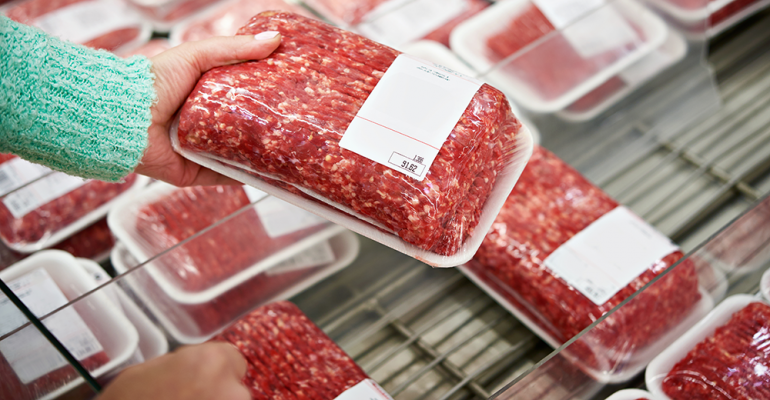 Meat departments, along with the produce category, are what most sway customers in making decisions about what supermarket they choose to shop, according to recent research.

“For years, we saw that the price profile of a store helped shoppers determine whether they were going to shop your store or the one down the street,” said Anne-Marie Roerink, a principal in the 210 Analytics research firm, at the Annual Meat Conference in Dallas. “Well, no more.” 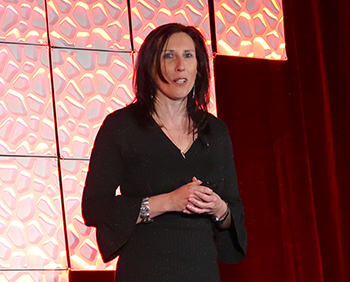 Price profile has dropped to No. 3 in the consideration set, Roerink (left) told attendees at the conference, sponsored annually by the Food Marketing Institute and the North American Meat Institute.

“It’s produce, hand in hand with meat, that helped consumers determine where they are going to shop,” said Roerink in presenting the 14th annual “Power of Meat” report.

“We get the people into the store and let the other departments do what they do best,” she said. The meat department remains supermarkets’ largest sales category, posting $67 billion in the most recent year, and helps lift the average shopping basket spend from $45 to $87, Roerink said. 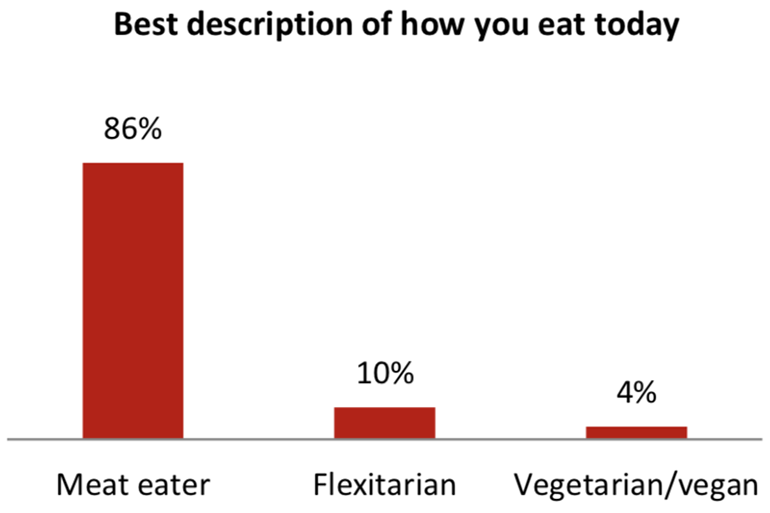 The meat department is seeing cultural pressures, however, with consumers considering healthier eating, using meat as more of a side dish, buying for smaller households and dining out with greater frequency.

Roerink said more consumers are identifying their diets as less meat-based, with 86% labeling themselves as meat eaters in the study. About 5% are vegetarian or vegan, mostly unchanged through the years.

“The one I’m worried about is the middle number — the flexitarians,” Roerink said, with about 10% of the survey participants identifying themselves as general vegetarian with some meat.

“These are our ‘swing voters,’” said Roerink, borrowing a term from political analysts. “They are attracted by a plant-based lifestyle but still want to include meat into their diet a little bit. So let’s make sure we talk to them about everything good with meat and poultry.”

In addition, younger consumers are buying meat less in bulk and more for a single occasion, Roerink said.

About 23% of Gen Z and younger Millennials fall into that growing single-meal group, the study found, with about 40% of shoppers still buying meat and poultry to last several days and 35% buying more than they need for one occasion and freezing it to use over time.

The “Power of Meat 2019” study also found more shoppers consider meat purchases in other areas of the store, Roerink said.

Besides the meat case and counter, they shop the frozen aisle and delicatessen areas for their purchases. Across all departments, convenience-focused meat and poultry saw robust growth in 2018, including value-added (up 5.1%), fully cooked (up 2.5%) and frozen (up 2.2%).

After 13 years as the top promotional platform, the traditional printed circular read before a shopping trip has fallen behind in-store promotional signage, the study found.

Digital, social-media and mobile promotions are growing as well. The study found use of a digital version of the traditional circular was up 38%, the in-store branded smartphone app use was up 24% and social media deals were up 12%.

“The trends point to opportunities for retailers and the suppliers to collaborate on ways to both educate and inspire our shoppers,” said Rick Stein, FMI vice president-fresh foods, in a statement. “The onus is on us to turn the ordinary into extraordinary, as 74% of shoppers are looking for something as simple as flipping routine meals that they already know how to cook into a different culinary experience.”

The “Power of Meat 2019” also found shoppers are turning with greater frequency to social media and recipe websites for meal inspiration. While 74% of those surveyed still rely on routine meals, about 47% said they were inspired by recipe websites, 31% by television cooking shows, 29% by Facebook, 26% by Pinterest and 24% by YouTube.

Roerink said Canadian retailers have created Facebook cooking groups to further promote their products. “Ingredients for the meals that week will be on sale,” she noted. “The Facebook group cooks the meal, talks about it, comes up with different ways to create the recipe. It has been a huge success for them.”

Roerink also suggested the chefs employed by supermarkets serve as the “celebrity chef” on such groups.

Meal preparation continues to be dominated by the stove and oven, Roerink said, “but some of the more interesting numbers are for the Insta-Pot and the air fryer.” Four of 10 consumers are using the instant cooker for meat and two in 10 are using the air fryer, she noted.

For those following a flexitarian regime, categorized as a mostly vegetarian diet with occasional meat and poultry consumption, the largest group is Generation Z, with 13% identifying as eating a flexitarian diet versus 6% of Baby Boomers. Women, at 15%, are also more likely to be flexitarians than men, at 6%.

Shoppers did report to being open to blended alternatives such as beef and mushroom burgers, with 63% saying they would “maybe” or “definitely” purchase blended meat and plant items.

The study found meal kits can serve as a way to introduce shoppers to new meat cuts. About four in 10 consumers said they had purchased a meal kit in the past year, either at retail (34%) or through delivery (13%). About 71% of respondents said the kits helped them try new meat or poultry items, the study found.

Production claims helped grow sales in meat and poultry items about 4.8%, the study noted. “Consumers tie production practices, such as hormone/antibiotic-free and grass fed, back to their own health, even more so than have benefits for the welfare of the animal,” the study synopsis noted, referring to such terms as cage-free and free-range.

“More than half of shoppers want to see their store carry more grass-fed (54%), all-natural (52%) and free-from-antibiotic-and-hormone items (52%),” the study noted.