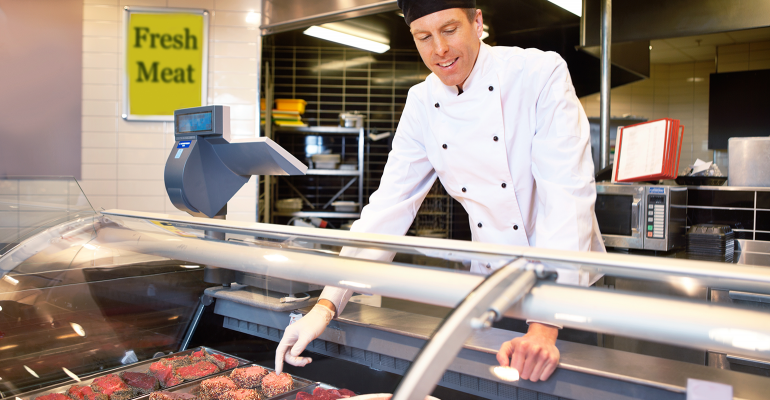 Millennials at the meat counter

Attracting Millennial shoppers to grocery stores is challenging enough in this day of online shopping, and nowhere is that task as daunting as it is in the meat department.

For a number of reasons, Millennials have strayed from the traditional meat case in stores, according to Michael Schumpp, director, public affairs, North American Meat Institute (NAMI). “Convenience and price are paramount to Millennials, who purchase more prepared foods than previous generations,” he said in a presentation on “The Millennial Meat Consumer” at this week’s National Grocers Association (NGA) conference in San Diego. “Most of their budget goes to the ready-to-eat food category.”

In addition, he said, “Millennials are 30% more likely to eat at a restaurant or bar compared to other generations, and spend less on food at home.”

Authenticity, transparency, responsibility, product inspiration and sourcing and animal welfare also play a role in Millennials’ shopping behavior, far more than other groups. And they have been raised in a culture that does not require visits to the grocery store as often as their predecessors. In fact, according to research from Mintel, 39% of Millennials are primarily buying their groceries online. And all of those factors can spell trouble for in-store meat departments.

There are ways that grocers can reach Millennials, said Schumpp, including such steps as on-site butchers and engaged employees and greater outreach and promotion online. (Schumpp recommends retailers check out NAMI’s MyMeatUp app for ideas and information, ranging from cooking and preparation to transparency, all searchable by types of meat cuts.)

A panel of retailers shared some of their successes and continuing challenges during the session. Paul Rowton, vice president, GES/Edwards Food Giant in Arkansas, noted that his 11-store chain is succeeding in meat with “one-on-one service encounters and greater attention to brands like Certified Angus Beef,” adding, “we are pushing our store brand as the ‘meat people’ in our area. That builds up our reputation with both customers and workers — our in-store talent is drawn to the meat department.”

“Meat is still center of plate in our region,” said Mike Davidson, executive vice president at 13-store Buehler’s Fresh Foods in Ohio, which also promotes Certified Angus Beef in its meat departments. And, like Edwards Food Giant, “our meat cutters are professionals and that’s a big win.”

While on-site meat professionals can help boost the category, Todd Jensen, vice president, sales, Harmons Grocery in Utah, noted that his 19-store chain puts a lot of focus on the self-service case for its frequent, experienced shoppers. “But having people with knowledge in the department is absolutely a good thing for those less knowledgeable shoppers,” he said.

Still, as Davidson noted, “The talent market in meat is aging up, as professionals are starting to retire.” That’s causing a gap in qualified meat counter personnel, one that retailers are looking to solve in different ways.

For Buehler’s, that means developing younger store staff to move up and into the direction of meat through a six-month apprenticeship program. At Harmons, a 39-week internship program was developed with veteran meat cutters and so far 15 employees in two years have gone through the program. At Edwards, Rowton said the retailer is exploring opportunities with local agricultural colleges and culinary institutes to find potential candidates.

“We’re emphasizing to employees that the meat department is not a dead-end job,” said Buehler’s Davidson. “It could be a track to store manager.”

Turning back to the Millennial customer, each of the retailers offered some pointers on how to attract that elusive shopper.

Edwards’ Rowton said his company engages with Millennials through recipes and preparation tips online. In addition, he said, “We’ve had a lot of success with value-added.”

“Millennials are looking for store experiences,” said Davidson, “and not just in the meat department. We’ve been operating under this view that Millennials don’t cook, but our experience is that they do cook. So we’re selling good wines and other ingredients so that they can make the dinners they want.”

“And those dinners look pretty good to me,” he said.

Rowton agreed, saying, “They want to cook, they just have less time than their parents did.”