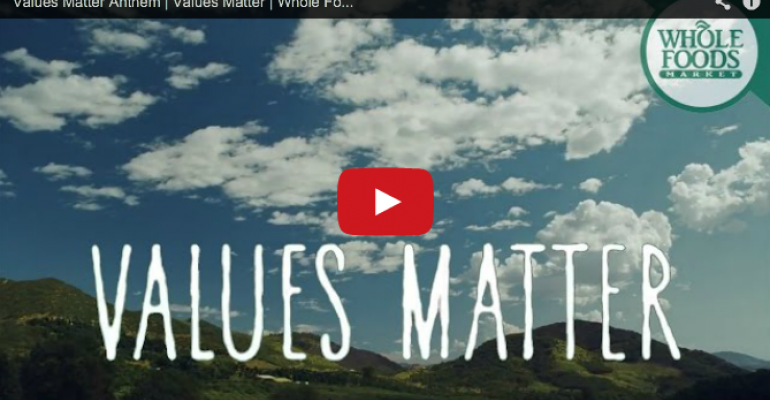 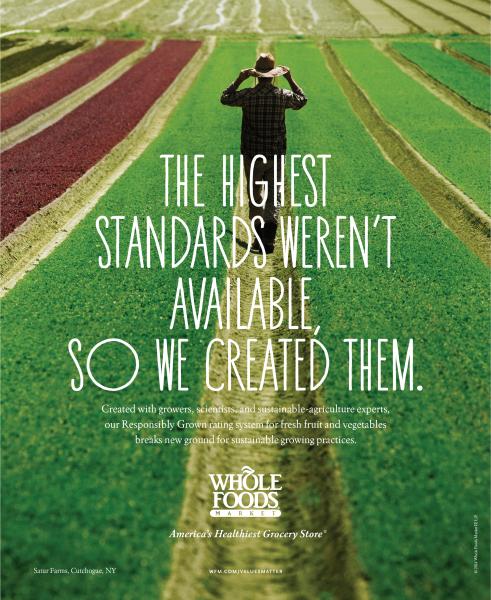 “Not everyone knows what makes Whole Foods Market different from other grocers, or the fact that no other retailer has standards as demanding or as transparent as ours,” Jeannine D’Addario, Whole Foods Market’s new global VP of communications, said in a statement. “This campaign will distinguish what makes our brand special, our food different and our quality superior. It’s our opportunity to reaffirm our unwavering commitments to our core values, which are at the heart of our brand.” D’Addario joined Whole Foods Market in August from Stanford Children’s Health, where she served as VP and chief marketing officer. D’Addario previously served as VP of marketing for infant, toddler and preschool brands at the Walt Disney Company.

The company partnered with New York-based Partners & Spade to develop the creative approach. Headlines such as “The Highest Standards Weren’t Available, So We Created Them,” tout Whole Foods Market’s milestones in developing its signature standards and ratings programs. Sustainable seafood standards, animal welfare ratings, and its new “Responsibly Grown” produce ratings program are the topics of authentic, documentary-style TV spots that were directed by notable commercial filmmaker Gerard de Thame and feature supplier partners — including farmers, ranchers and fishermen — along with Whole Foods Market customers and team members.

“We believe Whole Foods Market has raised the level of food consciousness more than any other retailer, and it is certainly one of the most genuine, transparent companies out there,” Anthony Sperduti, co-founder and creative director at Partners & Spade, said. “Helping craft Whole Foods Market’s first national conversation about its philosophy and vision has been some of our team’s most meaningful work because it’s bigger than just commerce: it’s a wake-up call for how to treat ourselves, each other and the planet.”

Austin-based GSD&M was selected as the partner to handle media strategy and placement, which includes spots during prime time television shows including “Modern Family,” “Scandal” and “The Voice,” and on late night favorites such as “The Tonight Show Starring Jimmy Fallon,” “Jimmy Kimmel Live,” and “Saturday Night Live.” Ads will also appear in business, food, health, and lifestyle outlets, both print and digital.

To complement the campaign launch, Whole Foods Market created a new website to present visitors with more transparency and information through videos, supplier partner stories, product profiles and team member testimonials. The company invites consumers to visit the new site and take a brief survey called “What Do You Value?” to share what matters most to them.