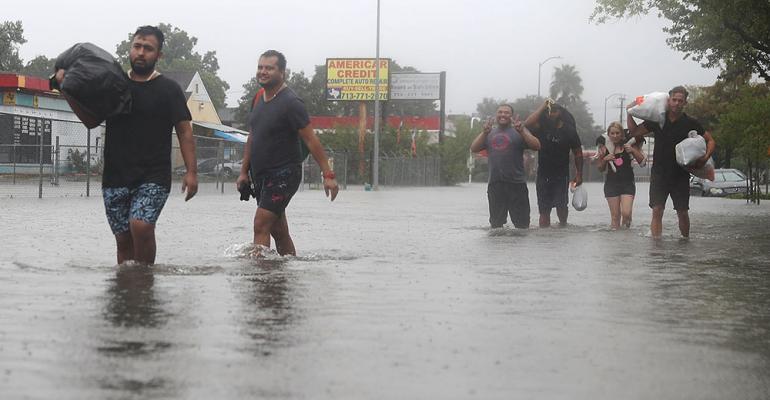 Joe Raedle/staff/Getty Images
People walk down a flooded street past businesses as they evacuate their homes after the area was inundated with flooding from Hurricane Harvey.
News

Hundreds of food stores remained closed across Texas Monday as the area dealt with continued flooding and heavy rains from Hurricane Harvey — a storm expected to have an historic economic impact.

The weather intelligence firm Planalytics said Monday it already estimates Harvey has cost Texas retailers more than $1 billion in lost sales. It said Harvey would likely be among the top five or 10 most expensive disasters in history for retailers and rival the economic devastation brought by the last Category 4 hurricane to make U.S. landfall, Hurricane Charley, in 2004, which had a $15 billion impact.

The economic impact of the storm will come into better focus over time, Planalytics noted. The company said initial assessments indicate restaurants have taken the biggest hit of retail businesses as they do not make up for lost traffic.

As consumers focused on “need-based” purchases look to supermarkets, with multiple closures some in storm-affected areas had lines to get in, social media posts showed:

Waiting in line at 11th St Kroger They're letting in ~75 ppl at a time #Houston #houheights #hounews pic.twitter.com/M1n669XDDQ

OMG HEB has a line to get inside pic.twitter.com/OqrvUDze1l

Retail chains including Walmart, Brookshire Bros. and Aldi kept shoppers informed of store closures over the internet. Other retailers like Fiesta Mart used social media to inform shoppers to call local stores before trying to visit.

Update: We've shipped 795 emergency truckloads of supplies, mainly water to S. TX & 1700 truckloads are due to arrive in the next week!

H-E-B posted its store closings on Facebook. Some stores have since reopened: