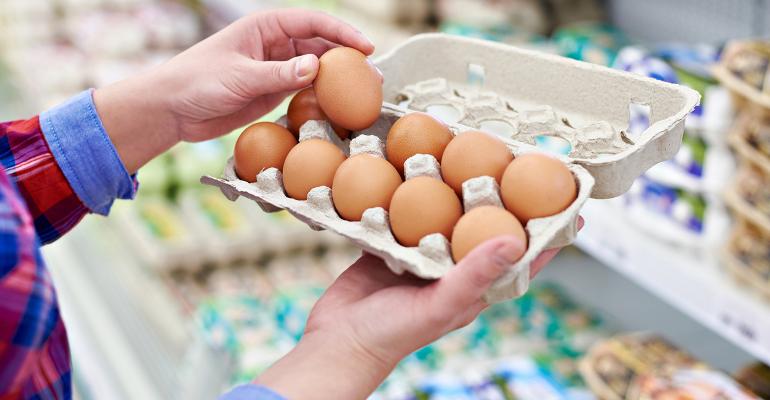 sergeyryzhov/iStock/Thinkstock
Eggs prices are expected to climb 4% to 5% at retail in 2018, while farm-level prices are projected to rise 25% to 26%.
News

The margin pressures retailers have been reporting recently from inflationary food costs could ease in the year ahead, according to projections from U.S. government agencies.

Higher production levels and a relatively strong U.S. dollar could keep downward pressure on the pricing of some of the largest commodities, according to Annemarie Kuhns, an economist with the Food Markets Branch of the Economic Research Service at the USDA, while retail food prices are expected to increase slightly.

“Production is forecast to be pretty much higher across the board” for many commodities, she said, citing the USDA’s World Agriculture Supply and Demand Estimates (WASDE) research.

Meanwhile, moderate retail price inflation is expected to return in 2018. The Bureau of Labor Statistics predicts that the Consumer Price Index (CPI) for all food will be up 1.5% to 2%, including price increases for food away from home (restaurants) of 2% to 3%, and price increases at retail of between 1% and 2%.

After deflation in retail food prices of 1.3% in 2016, the current year could turn out to be flat to slightly deflationary. If the retail CPI is down for 2017, it would mark the first time since the 1950s that the U.S. has experienced two deflationary years in a row.

“Even if prices do increase 1% to 2% in 2018, that would still leave price levels slightly lower than they were in 2015, before prices started to decline overall,” Kuhns said.

Eggs, which are often a volatile category, are projected to see retail prices rise 4% to 5% in 2018, while farm-level prices are expected to increase 25% to 26%.

Wholesale dairy prices are expected to be flat to down by as much as 1% in 2018.

Updated projections are expected later this week when the USDA releases its December CPI research.

Recently the PPI has grown faster than the CPI, as retailers have resisted raising prices in a competitive environment, analysts said. November marked the 10th straight month in which wholesale price increases exceeded retail price increases, according to research from Barclays Capital. This “indicates gross margin pressure as cost increases are not fully passed on,” analyst Karen Short wrote in the report.

Retailers in recent earnings calls have indicated that competitive pricing pressures have prevented them from raising retail prices too quickly despite slight inflation in their own food costs.

“Our inflation at cost is still above our inflation at retail,” Michael J. Schlotman, executive VP and CFO at Cincinnati-based Kroger Co., told investors during the company’s third-quarter earnings call last month.

The company is focusing on lowering its cost of goods through negotiations with vendors, he said, and has also been able to fund lower retail prices with a better product sales mix that includes more high-margin natural foods products and store brands.

Price changes at retail usually tend to lag those at the farm and wholesale level, Kuhns pointed out.

While some farm-level and wholesale price changes tend to be passed on relatively quickly at retail, price fluctuations for ingredients used in more highly processed products can take six to 10 months before they are felt at the retail shelf, Kuhns explained,