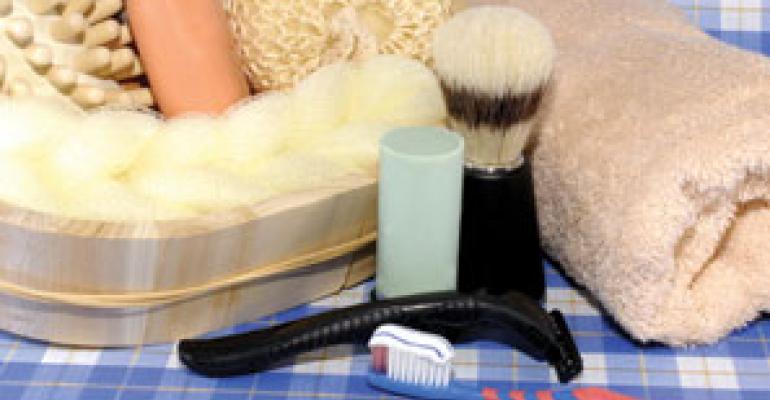 Men's primping and preening products took a hit this year, but retailers are hopeful for a turnaround in 2008. Body sprays are carrying the category right now, thanks to young adult males. But men's skin care lines haven't fared well. Neither have razors and cartridge refills, which are usually the biggest sellers in men's grooming. With the percentage of male shoppers quickly approaching 50% in supermarkets,

Men's primping and preening products took a hit this year, but retailers are hopeful for a turnaround in 2008.

Body sprays are carrying the category right now, thanks to young adult males. But men's skin care lines haven't fared well. Neither have razors and cartridge refills, which are usually the biggest sellers in men's grooming.

“As retailers, we need to take the opportunity to step out of the box and do a better job of marketing to our male consumers,” he said. “For so long our focus and our target have been on mom and what mom is buying vs. the male consumer that shops there too, and they are not as budget-minded as mom would be.”

Plus, the male shopper who may not have the confidence to buy food for the family is likely to feel very comfortable buying men's grooming products for himself, Jones added.

“It's a matter of the consumer you have shopping in the store,” he told SN. “There are more men shopping in supermarkets than there used to be, but if you are looking at a demographic that is [mostly] women, you probably don't want to address it.” Yahn and other retailer and wholesaler executives were interviewed during a recent conference of the Global Market Development Center, Colorado Springs.

Despite lackluster sales throughout most of the category, retailers are trying to focus on what is selling.

“Axe is the phenomenon that is driving [the category], with Gillette coming in behind that with Tag, and there will be a million knockoffs now because they have been doing so well,” said Al Jones, senior vice president, procurement and merchandising, Imperial Distributors, Auburn, Mass.

Nearly half of the top 10 deodorant unit sellers at Imperial are Unilever Axe items, according to Jones. Axe body sprays are the most popular. Axe stick deodorants follow closely behind, and lately shoppers have shown an increased interest in Axe body wash.

The company's manly scented products, touting virile-sounding names like Vice, Kilo and Phoenix have been marketed heavily on the Internet and youth-oriented channels like MTV.

Body sprays have also fared well at Associated Grocers stores in recent years, according to Gerry Buckles, director of center store for the Baton Rouge, La.-based company. “We carry three brands, and we are currently in the process of private-labeling a body spray of our own,” he said.

Axe is so popular at stores of Bashas', Chandler, Ariz., that Sue Vodika, HBC buyer/category manager, sees the potential for extensive line expansions. “If Axe was to get involved in the shaving [market], with shaving creams and related products, it may spark something,” she said.

While such items are faring well, men's skin care products are not, Jones said. As a result, Imperial has discontinued nearly every line it carried in recent years.

Robert Passikoff, president, Brand Keys, New York, believes that some skin care items could thrive, but he warns marketers not to go too far out of the box in this segment.

“You won't be successful with men's products that move too far away from the kind of grooming rituals that men are used to,” he said.

Neutrogena and Nivea both have men's skin care lines. Neutrogena's includes a face scrub, shower gel, a lotion with a sun protection factor of 20, and a post-shave lotion, as well as an age-fighting face moisturizer, hydrating eye reviver, hair and body wash, skin-clearing face wash and skin-clearing shave cream.

Nivea has a similar assortment of products. The line consists of men's face washes, aftershave gels, lotions and balms, with sub-lines designed for various skin types. Nivea also makes a collection of Advanced Men's Face Care products, including a firming lotion with SPF 15, a revitalizing lotion and a revitalizing eye cream.

Body washes have been selling well enough for Imperial Distributors to merchandise them alongside deodorants.

“We were scratching our heads and wondering, ‘What do you put on the bottom shelf if you have a pretty good-sized set — an 8-foot, 12-foot or even 16-foot deodorant set?’” Jones said. “We decided to tie in body washes and see what would happen. So far, it's done pretty well.”

Some products are looking up, but retailers remain guarded, as even category staples like aftershave have experienced declines in sales. Men's aftershave fell 4.2% to $28.4 million during the 52 weeks ending Nov. 3, according to data reported in the Nielsen Strategic Planner, a service of the Nielsen Co., Schaumburg, Ill.

Men's grooming has hit a bit of a plateau, but it's not slowing completely, according to James Whittall, founder and president of MenEssentials.com, Ottawa, a high-end male grooming retail website.

“I attribute some of the leveling off to the sluggish U.S. economy,” Whittall observed. “In terms of enthusiasm for the category as a whole, however, we haven't seen a decline in the number of customers, only a slight decline in sales totals.”

Male shoppers are getting more sophisticated each year, and they're demanding luxury grooming utensils and products with more natural ingredients, he added. Straight single-blade razors, shave cream brushes and high-end shave creams are among the fastest-moving products at MenEssentials.com.

These upscale items might cost more up front, but Whittall believes male shoppers are starting to recognize the long-term savings potential.

“Men are starting to wonder if they really want to spend $15 on multi-blade razors that only last a few weeks,” he said. “Adding a brush to a man's shaving regimen is another money-saving technique.”

Sales might be flat for some retailers, but at Minyard's Hispanic format, Carnival Food Stores, men's grooming is booming.

“For us, it's a good category, because young Hispanic men are all about fragrance and looking good and smelling good,” said Mike Bevel, category manager for the Coppell, Texas-based retailer.

Whittall sees young consumers as the driving force behind category sales. Consequently, anti-aging products such as age-fighting moisturizers, eye creams and even hair color for men aren't likely to rake in profits as well as items like body sprays, he said.

“As men get older, they are attuned to how age has changed their bodies, and they become much more knowledgeable about nutritional whole health and beauty care relative to dry skin, hair products, coloring and so forth,” said Mansfield.

Whatever the core demographic, Bi-Lo's Jones expects retailers to ratchet up their efforts to rein in sales in men's grooming.

“I think the category presents a great opportunity for retailers to reach another consumer by properly marketing and engaging the consumer differently,” he said. “The question we face now is, ‘How do we engage them at a higher level?’”
Additional reporting: Dan Alaimo