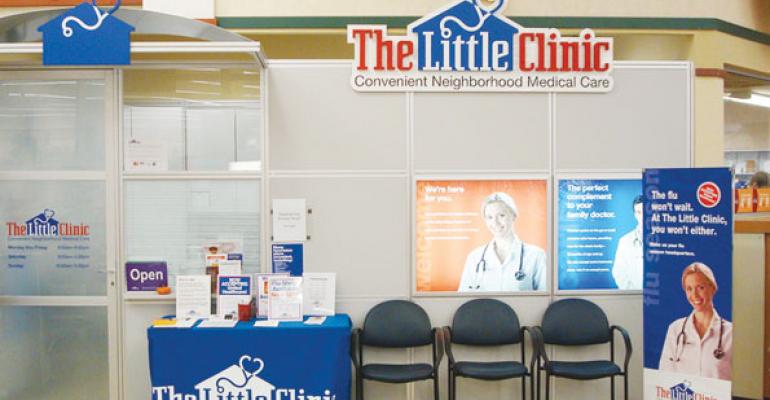 SHOREVIEW, Minn. — Convenience care retail health clinics, which debuted 12 years ago in Cub Foods stores, are poised for healthy 10% growth in the coming year, according to “The ConvUrgentCare Report on United States Walk-In Clinics,” released this month.

Walk-in health clinics have become more sophisticated in their development, said Tom Charland, chief executive officer of Merchant Medicine, who produces the annual report and is a research consultant, based here, for the retail health clinic sector. This comes after early stage developments and a flagging period where growth slowed.

Supermarkets and mass merchandisers, with their larger footprint and higher traffic, have a lot of opportunity as the country undergoes a restructuring of health care and these retail formats consider the goals of their health clinic offering, he said.

Some like CVS Caremark’s MinuteClinic — which operates 549 clinics, the largest number of clinics of any retailer — is partnering with a growing list of health systems. MinuteClinic most recently announced clinical collaborations with UMass Memorial Health Care, Carolinas Healthcare, Emory Healthcare and Indiana University Health.

Such relationships, a growing trend among retail clinic operators, are symbiotic and leverage the expertise and integration capabilities of big health systems.

As of the beginning of this year, there were 1,355 retail walk-in clinics operating in various retail formats. That figure could climb to about 1,500 or more clinics by the end of this year.

MinuteClinic is expected to add 100 clinics this year as it also weeds out underperformers, said Charland.

Walgreens’ Take Care Health, with 355 clinics, is being hampered by its loss of the Express Scripts pharmacy benefit management business. Growth of Take Care is expected to remain flat for the year.

However, Duane Reade, a subsidiary of Walgreens, may expand its DR Walk-In clinics from 12 to 20 stores this year. As opposed to Walgreens’ Take Care clinics, physicians rather than nurse practitioners staff these clinics, and they are popular, according to Charland.

The drug store sector represents about 70% of the retail health clinic market. Charland calls the drug store format a “beautiful strategic alignment” for health clinics. MinuteClinic has reported that 25% of its customers become new prescription customers for CVS.

Charland points out that drug store foot traffic, however, is nowhere near that of what supermarkets or mass merchandisers pull in. Drug stores also are limited in the selection of merchandise that patients can shop.

While the strategic alignment may not be as perfect for convenience health clinics in a grocery store or discount merchandiser setting, these retail sectors are looking to grow their clinic business and partnerships because of the natural synergy with food and health as well as the nation’s focus on affordable health care.

Safeway, not officially in the clinic business, is said to be quietly building as many as 100 health clinics in its stores, which Merchant Medicine reported on last year without confirmation from Safeway. Charland speculated that Safeway is looking into offering health clinic services, including occupational medicine, to area employers. Such services might include pre-employment physicals, drug screenings and injuries. Through its subsidiary Safeway Health, Safeway has started marketing its health benefit solutions to other employers. To date, there has been no statement from Safeway about such health clinics.

Since it purchased The Little Clinic from private equity firm Solera Capital in 2010, Kroger Co. has been in a holding pattern with its 80 clinics. Publix Super Markets had hosted 40 Little Clinics in Florida and Georgia until it terminated its agreement with Solera Clinics last year. Charland believes Kroger is still trying to figure out its health clinic model before any significant expansion.

The 10-week program, which retails for about $500, provides patients with comprehensive information and counseling on diet/nutrition, physical activity and behavior modification.

“It’s a lifestyle behavior modification program. You could just as easily call it a diabetes management program. It is very comprehensive and much more clinically sophisticated than the typical weight loss program. It takes full advantage of the fact it is in a grocery store,” explained Charland. Weigh Forward is an example of new strategic services convenience care clinics are adding for greater health care viability.

On the mass merchandiser front, Target Clinics, which number 44, are expected to expand this year outside of their current markets of Minneapolis-St. Paul, Baltimore-Washington, Chicago and South Florida.

“Target has the ideal shopper demographic — well-educated, dual-income parents with kids,” said Charland. “Target has a grocery format in Super Target that gives them an added strategy in healthy living.”

Meanwhile, Wal-Mart Stores, with 154 clinics operated by numerous hospital systems in leased space, stated late last year it wants to get into primary care medicine. Wal-Mart put out a request for information (RFI) seeking a partnership on how to accomplish that goal.

“One theory is the RFI was issued to find a new [clinic] strategy. There are a lot of questions as to what their strategy will be — go more national with a partner and open clinics more quickly or take an occupational medicine approach,” Charland explained.

The current health care environment favors further development of retail clinics. It takes several years and two patients per hour before retail clinics become profitable, said Charland. Clinics are also challenged to generate business during non-seasonal periods such as summer when business tends to drop off. Programs such as RediClinic’s Weigh Forward will help offset slow revenue periods, he said.

“There are certain things we know that are going to happen. We are going to move away from fee for service payment in health care to one based on outcomes. That is going to happen, health reform or not, and when it happens all of a sudden the providers of health care are looking at how to keep people healthy and how to do it in the most efficient way possible. Retail health clinics start to become a platform for doing it faster, better and cheaper.”