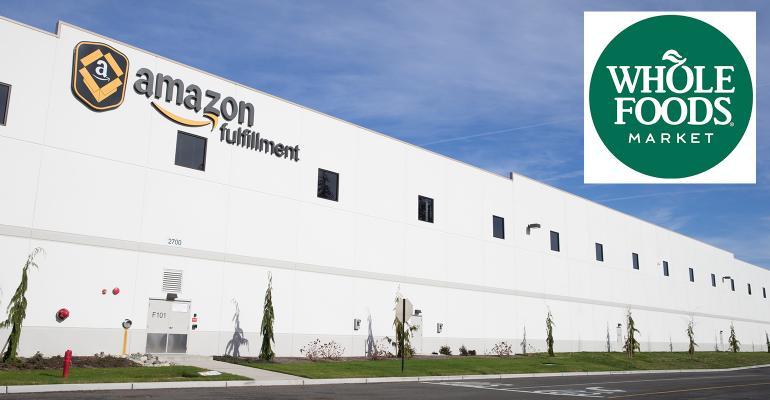 This week, supermarkets and other food retailers got even more reason to be worried about Amazon.

Bezos made the disclosure in a letter to shareholders filed April 18 with the Securities and Exchange Commission. Prime is expected to form the basis of an upcoming grocery rewards program including Whole Foods Market, acquired by Amazon last year.

“There is no question that Amazon is winning the online grocery race. While Walmart (Amazon's top competitor) is actively improving their grocery delivery capabilities, that company only captured 9% of the online grocery market in 2017, half of Amazon's 18% market share,” Nathan Rigby, vice president of sales and marketing at One Click Retail, wrote in the Salt Lake City-based firm’s “Amazon Grocery Q1 2018 Update U.S.” report.

“Amazon is investing in grocery from numerous angles — Whole Foods, Amazon Go, Prime Now, Pantry — and no matter what sticks and what doesn't, every quarter Amazon's share of the online grocery sales channel is getting bigger,” he noted.

One Click Retail estimated Amazon’s total U.S. grocery sales at $650 million for the first quarter of 2018, a gain of 48% from a year earlier. Grocery sales via the Amazon Pantry service were pegged at $55 million, up 14%.

Beverages remain the top-selling grocery category for the company, accounting for nine of the 10 best-selling items on Amazon.com in the quarter. Sales of coffee, Amazon’s largest grocery segment, climbed an estimated 44% year over year to $145 million, with cold beverages right behind with sales of $140 million, up 40%.

“It looks like it will be some time before beverages are dethroned as Amazon's top grocery categories, but it's promising that household staples are starting to take off,” Rigby wrote in the report. Fast growers in the quarter included milk and cream, shortening and oil, baking mixes and salad dressing. “Each of these was only worth approximately $5 million, but if the high growth rates keep up, they'll be major categories soon enough,” he noted.

Sales in the milk and cream subcategory surged 152% year over year, which may indicate a turning point for online grocery shoppers when it comes to perishable items, according to Rigby.

“It has taken a long time for consumers to get comfortable with buying perishables online, which is why nonperishables like coffee and snack foods dominate the grocery space,” he said in the report. “So the growth of milk and cream signals a long-awaited shift in consumer behavior. Consumers are becoming less selective about what groceries they're buying online and are beginning to treat Amazon just like any other grocery store.”

Amazon Pantry’s growth has tailed off, One Click Retail’s report said, and last month Amazon announced that the program would become a $5-per-month subscription service outside Prime. Currently exclusive to Prime members, Pantry packages everyday essential items — such as nonperishable groceries and household goods such as shampoo and laundry detergent — into one box delivered for a flat fee of $6.

“Whether or not Pantry's fortunes improve, Amazon's clear commitment to subscription-based services is going to have a strong impact on brands,” Rigby added. “With the ongoing rollout of Prime Now two-day grocery delivery into more jurisdictions throughout the U.S. and the success of other value-added ‘members only’ features such as AmazonFresh and Prime Day, Amazon is growing what is essentially the country's largest customer loyalty program — loyalty not only to the platform but also to the brands that sell through it.”

“We expanded Prime to Mexico, Singapore, the Netherlands and Luxembourg, and introduced Business Prime Shipping in the U.S. and Germany,” Bezos told shareholders. “We keep making Prime shipping faster as well, with Prime free same-day and Prime free one-day delivery now in more than 8,000 cities and towns. Prime Now is available in more than 50 cities worldwide across nine countries.”

Efforts are under way to amplify Prime’s presence at Whole Foods. “We’ve also begun the technical work needed to recognize Prime members at the point of sale and look forward to offering more Prime benefits to Whole Foods shoppers once that work is completed,” Bezos said.

Amazon has instituted two rounds of price cuts at Whole Foods since acquiring the chain last August, including what Bezos described as a record Prime member-exclusive promotion for turkeys in November. Free two-hour delivery on orders over $35 for Prime members debuted in February and expanded to more cities in March and April. Bezos said plans call for “continued expansion across the U.S. throughout this year.”

Other benefits include 5% back at Whole Foods for holders of the Amazon Prime Rewards Visa Card, the availability of Whole Foods private labels like 365 Everyday Value on Amazon.com, and the ability to pick up or return Amazon packages at Amazon Lockers in hundreds of Whole Foods stores.

The no-checkout-required Amazon Go store in Seattle, which opened its doors in January, also is providing key insights into the shopping experience — including food retail, according to Bezos. Strong sellers include caffeinated beverages and water, and customers like the store’s Chicken Banh Mi sandwich, chocolate chip cookies, cut fruit, gummy bears and Amazon Meal Kits, he wrote in the letter.

“Since opening, we’ve been thrilled to hear many customers refer to their shopping experience as ‘magical.’ What makes the magic possible is a custom-built combination of computer vision, sensor fusion and deep learning, which come together to create ‘Just Walk Out’ shopping,” said Bezos. “With JWO, customers are able to grab their favorite breakfast, lunch, dinner, snack and grocery essentials more conveniently than ever before.”