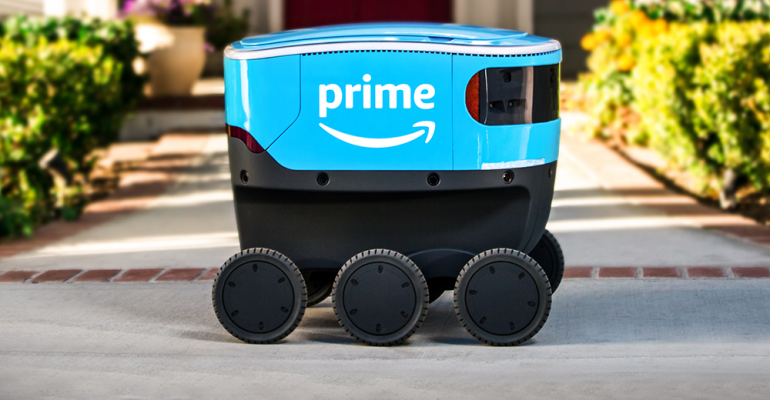 The e-tailing giant said Wednesday that six of the autonomous, all-electric vehicles — about the size of a small cooler and emblazoned with the Prime logo — are now making package deliveries in a neighborhood in Washington’s Snohomish County.

In the pilot, Amazon Scout will deliver packages Monday through Friday during daylight hours. The six-wheeled, self-guided vehicles roll along their delivery route at a walking pace but initially will be accompanied by an employee, according to Amazon. The company said it developed the device at its research-and-development lab in Seattle to ensure the vehicles can safely navigate around pedestrians, pets and other objects in their path.

“We are happy to welcome Amazon Scout to our growing suite of innovative delivery solutions for customers and look forward to taking the learnings from this first neighborhood so Amazon Scout can, over time, provide even more sustainability and convenience to customer deliveries,” Sean Scott, vice president and builder of Amazon Scout, said in a blog post Wednesday announcing the test.

Delivery in the pilot works as follows: Customers in Snohomish County order items from Amazon as normal — either at Amazon.com or via the Amazon App — and their package(s) will be delivered by one of Amazon’s carrier partners or by Amazon Scout. When Scout arrives at their home, customers walk over to the vehicle, the top flips open and they retrieve their order. Scout then goes on its way.

“We are excited to work with the community of Snohomish County as our initial partner for Amazon Scout,” Scott said.

Amazon said customers can select from the same delivery options, including free same-day, one-day and two-day shipping for Prime members.

“We are delighted to welcome Amazon Scout into our community. Similar to Amazon, we are always looking for new ways to better deliver service to our residents,” Snohomish County Executive Dave Somers said in a statement.

With the introduction of Scout, Amazon joins several other large retailers delivering groceries and other products using driverless vehicles.

Walmart is engaged in several pilots using self-driving vehicles to fulfill online grocery orders, with partners including Udelv, Ford and Waymo. In a test being conducted in Chandler, Ariz., with Waymo — formerly Google’s self-driving car project — autonomous vehicles pick up customers at their homes and take them to the store to collect their orders. The pilot started over the summer.

Last month, at a Fry’s Food Store in Scottsdale, Ariz., The Kroger Co. launched what it called the first-ever autonomous vehicle delivery service available to the general public. The service, which delivers groceries ordered online or via a mobile app, went live after a successful pilot with Mountain View, Calif.-based Nuro that began in August.

And last week, Ahold Delhaize USA unveiled plans for its Stop & Shop chain to pilot driverless vehicles from San Francisco-based Robomart Inc. that bring consumers a selection of groceries when summoned through an app. Described as a “self-driving grocery store,” Robomart carries an assortment of produce, meal kits and convenience items directly to customers. “Grab-and-go” technology in the vehicle automatically records the products that they select and charges them.