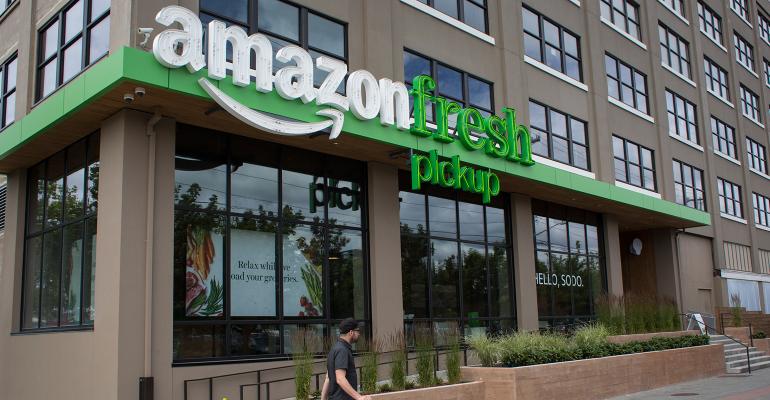 Amazon on Friday said it was discontinuing its AmazonFresh grocery delivery service “to select ZIP codes” around the country in a move that likely portends further realignment of the offering, analysts said.

“There is some internal rationalization happening for Amazon in grocery as it integrates the Whole Foods stores into the business,” said Jack O’Leary, an analyst at Planet Retail RNG. “While Instacart does have almost three and a half years remaining on an agreement with Whole Foods to be its exclusive perishables delivery provider, I think Amazon long term will take this over, delivering groceries from Whole Foods stores using its own Prime Now program.”

O’Leary said Amazon’s Prime Now service, through which customers can order groceries for delivery in under two hours, appears to be more successful than AmazonFresh.

“AmazonFresh has always been an economically challenging program to operate without scale,” he said. “That scale is tough to reach in many areas when it costs customers $14.99 per month on top of their existing Prime memberships.”

Prime Now, which is available with a $99-per-year Prime membership, is now available in 32 U.S. markets, and offers perishables in most of its coverage area, O’Leary noted.

He said he expects that Amazon will eventually integrate its Fresh and Prime Now services, with either the elimination of the AmazonFresh fee or an increase in the fee for Prime membership.

Amazon is known for experimenting with new offerings to see what works and what doesn’t work, said Griswold, noting that AmazonFresh could still be performing “reasonably well” in the markets where it is continuing to operate.

“If this wasn’t working for them, they would have gotten out of the whole thing, instead of looking at select markets,” he said.

AmazonFresh customers in several states, including parts of New York, New Jersey, Pennsylvania, Delaware, Maryland, California, Virginia, Connecticut and Massachusetts, have reported receiving notices that AmazonFresh would discontinue service in their area, according to a report on technology news website Recode.

The company also said that no fulfillment centers would close as a result of the cutbacks and that the move is unrelated to the Whole Foods Market acquisition.

Analysts, however, see the cutback in AmazonFresh service as part of the company’s overall strategy to integrate Whole Foods into an expanded grocery offering.

“Amazon’s move today away from the AmazonFresh program is a clear second step in integrating Whole Foods, with many more moves to come,” said Spencer Millerberg, CEO of One Click Retail, which tracks Amazon’s product sales. “AmazonFresh on its own has not gained sufficient momentum in 10 years since it launched, while Whole Foods items on Amazon have been growing [around] 8% per week since launch.”

O’Leary of Planet Retail said he expects click-and-collect services to be “hugely relevant” for perishables in the future, and Whole Foods could be an element of that offering at Amazon.

“We expect Amazon to take learnings from its AmazonFresh Pickup locations in Seattle and try to scale that across more areas of the country, whether tethered to Whole Foods locations or standalone,” he said. “The elimination of last-mile delivery and that added expense makes these locations more economically feasible than AmazonFresh home delivery in many areas.”

Griswold of Gartner agreed that Amazon would likely expand its e-commerce efforts in areas where Whole Foods operates in order to leverage the retailer’s brick-and-mortar presence.

“I think they are looking in areas where they have Whole Foods to go even deeper into that e-commerce offering,” he said.