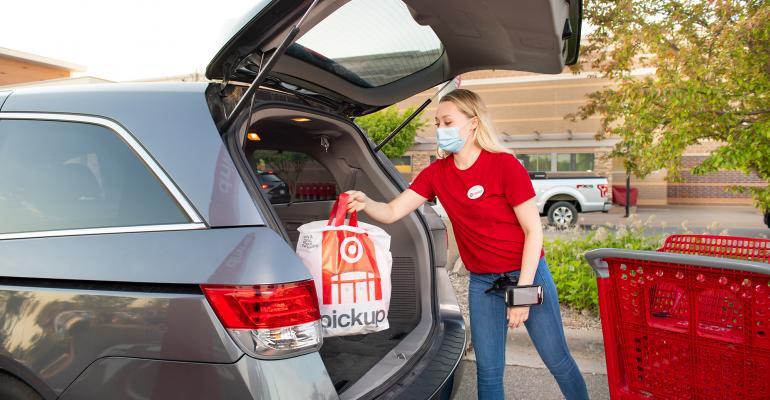 Target
The share of supermarkets’ active user base that also shopped online for groceries at mass merchants came in at 24.2% for April, down from 29% in March, Brick Meets Click reported.
News>Online Retail

U.S. online grocery sales in April dropped 6.9% month-to-month and 3.8% year over year after the market appeared to be rebounding from an early-year decline.

The online grocery market came in at $8.1 billion for April, according to the latest Brick Meets Click/Mercatus Grocery Shopping Survey, released Monday. April’s total was down from $8.7 billion in March and February, which marked an uptick following a 4.5% month-to-month decrease to $8.5 billion in January.

The downturn stood out most in the delivery segment. Brick Meets Click said delivery-related sales in April — representing nearly a third of the online grocery market for the month — fell almost 6% year over year and contributed about half of that decline. At the same time, the average order value (AOV) for delivery climbed 6% year over year to $84 in April, partially offsetting an 11% AOV decrease stemming from a MAU base that contracted almost 9% over the past year. 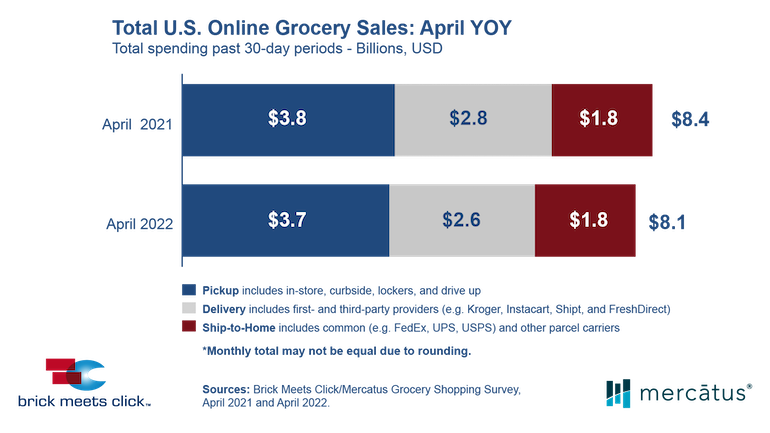 Accounting for nearly half of April e-grocery sales, the pickup segment saw sales dip less than 3% from a year ago. Unlike the delivery and ship-to-home channels, pickup had a nominal drop in AOV of about 70 basis points to $81, which — combined with a 2% decrease in order volume — contributed to the year-over-year falloff in sales, according to Brick Meets Click. The MAU base for pickup shrank by less than 3% compared with a year earlier, though the channel’s order frequency among MAUs remained about the same.

Ship-to-home, the smallest segment with just over 20% of the April online grocery sales, fell more than 3% year over year. Brick Meets Click cited a nearly 6% year-over-year decline in order volume as the chief reason for the drop-off, despite an almost 3% gain in AOV to $47. The advisory firm attributed the lower order volume in April to more than 2% shrinkage in the MAU base versus a year ago. MAUs also received 4% fewer ship-to-home orders during the month.

E-grocery sales accounted for 12.3% of total U.S. grocery sales in April, down slightly from 12.7% a year earlier, Brick Meets Click reported. Excluding ship-to-home — a service not offered by most conventional grocers — delivery and pickup sales for April combined for 9.6% of the overall grocery market, down about 30 basis points from April 2021.

“It’s no surprise that inflation is affecting where and how people shop online for groceries,” Bishop explained. “Some customers may now find pickup a more attractive service, since it can help them avoid the higher incremental costs associated with delivery, and others may choose to simply move more of their transactions back into the store.”

Currently, consumers appear more concerned about the impact of inflation than contracting COVID-19, Brick Meets Click observed. In analyzing responses from March and April 2022 related to a MAU’s most recent online order, the advisory firm found that mass retail customers were 34% more likely than supermarket customers to cite cost — i.e. not paying more than necessary — as the top factor in deciding where to buy groceries online. In terms of receiving online grocery orders, pickup customers who shopped as supermarkets and mass merchants were 18% and 11% more likely, respectively, to name cost as the chief consideration versus delivery customers.

Online grocery cross-shopping between the supermarket and mass retail channels in April rose over 40 basis points from a year ago but decreased on a month-to-month basis. The share of supermarkets’ MAU base that also shopped online with mass for groceries during the month came in at 24.2%, down from 29% in March and about 26% in February and January.

Repeat intent — the probability of an e-grocery shopper to use the same service again within the next month — rose almost 8 percentage points year over year to nearly 63% in April. Brick Meets Click noted that, month to month, April’s repeat intent rate for mass merchants tailed off nearly three points but surged 50 points for supermarkets.

“With budget-conscious consumers naturally gravitating towards lower-cost online services like pickup, grocers need to find ways to offer these services profitably and remain competitive,” stated Sylvain Perrier, president and CEO of Toronto-based Mercatus. “Conventional grocers can take advantage of more efficient pick-and-pack practices. They can also use tiered pricing models and variable fee structures to offset the cost to serve while still providing a compelling pickup experience to customers.”