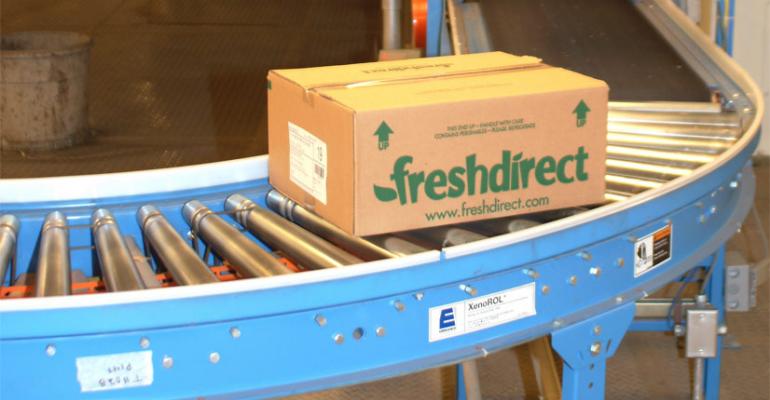 New York-based FreshDirect was rated to provide the best customer experience in a study by ecommerce service provider Fluid and presented in a conference call on Internet grocery by Wells Fargo on Monday.

FreshDirect, an online-only grocer that delivers to the New York and Philadelphia metro areas, was rated as having a strong user experience, a grocery-centric presentation and strong product quality. It was also the only online grocer tested that offered wine recommendations based on purchases, noted Bridget Fahrland, VP of client strategy for Fluid.

FreshDirect beat out Google Shopping Express, which not surprisingly, offered strong searching and sorting features, but was considered weak on grocery-centricity. The other sites tested, in order, were Safeway, AmazonFresh, Peapod, Walmart to Go, Harris Teeter and Whole Shopper, the online offering from Whole Foods Market.

The study concluded that some of the traditional supermarkets — including Safeway and Harris Teeter, a division of Kroger Co. — have what Fahrland described as an “outdated interface.”

“Safeway has mastered the integration of online and in-store, but they need a design overhaul,” she said.

Other sites were hit-and-miss. Walmart was true to its EDLP promise, but its search function was lacking — a search for apples turned up pears as the top row of product selections, while Amazon Fresh did “a surprisingly poor job” of highlighting the quality of its products on the website, Fahrland noted.

Whole Shopper, she said, also delivered a weaker customer experience than she expected, given the chain’s reputation for providing a high-quality in-store experience.

She noted that since cooking and food can be a “joyful experience” for may people, online grocery operators need to up their game in terms of the user experience.

“Bringing a little of that joy and passion to the user experience would be helpful,” Fahrland concluded.

How FreshDirect Got People to Do The Unthinkable — Buy Fish Over the Internet
Oct 03, 2013

Online grocery: Strategies to win within and beyond the store
Mar 24, 2014