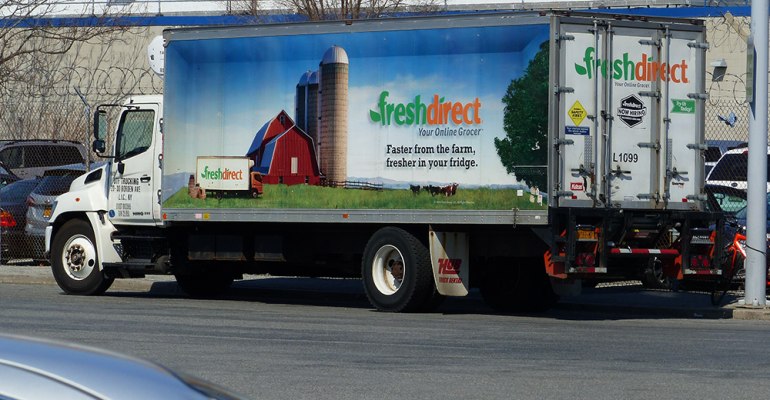 The online grocer earlier this month extended its geographic coverage to more parts of Connecticut and metropolitan Washington, D.C., and said it plans more expansion later this year and in early 2020. 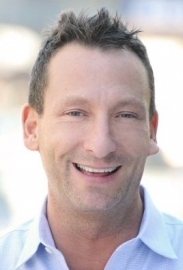 “New York has been remarkable for us. Yet we also see similar opportunities in other cities. So we have every intention of having Washington, D.C., Philadelphia, Boston, all mature the same way,” CEO David McInerney (left) said last week in an interview at the FreshDirect Campus, which opened in July. “And it’s not just the cities but also the suburbs around them. The suburbs are really attractive for us. There are larger families, there’s a higher appreciation for the quality of fresh food, the competition is not as deep, and the frequency is great, too.”

Besides entering new market areas, FreshDirect this month kicked off same-day delivery in Manhattan. Customers can place an order before 10 a.m. and receive it as early as 5 p.m. Plans call for same-day service also to be rolled out soon in Brooklyn and Westchester County.

FreshDirect already offered next-day delivery, with customers able to order up to seven days in advance, along with on-demand service in New York City via its FoodKick business. The latter offers a curated assortment of fresh food, alcohol, local items, prepared meals and grocery staples picked by personal shoppers and available for delivery in as soon as an hour to customers in select markets. It currently operates from two facilities, one in Manhattan and the other in Brooklyn.

“Using FreshDirect for weekly shops and then FoodKick for fill-in shops throughout the week, we believe, is close to a perfect solution for customers,” McInerney said. “We’re going to continue to refine those and make the service offering even more attractive.” 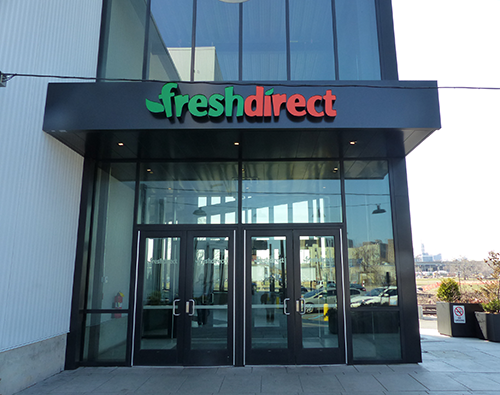 FreshDirect noted that the move of its headquarters from Long Island City in Queens, N.Y., to the 400,000-square-foot Bronx campus (left) enhances its ability to provide “farm to fork” food distribution, add thousands of new products and serve new market areas via the FreshDirect, FoodKick and FreshDirect At The Office brands.

Designed to be eco-friendly and energy-savvy, the facility has robotic pick towers, smart routing and nine miles of conveyor belts. It’s also temperature-controlled for categories such as meat, deli and bakery, including a freezer room for premium ice cream. The company, too, is now able to pack orders into recyclable bags instead of boxes for delivery.

“One of the benefits of the move to this building from our Queens location is that we can continue to push and reach further. But it’s also about the volume of business this has opened up for us. Our previous home was much smaller, so this hub will help us service a much broader geographic footprint,” said P.J. Oleksak, chief growth officer. “I think the thing we’re most excited about, even beyond the geographic expansion, is how this has unlocked our ability to increase and enhance our service offerings. We just launched same-day delivery in Manhattan, which is different than our FoodKick on-demand business. So we’re continuing to evolve our service to enhance the customer experience.”

Oleksak described FoodKick, which launched in 2016, as “a proven business model,” given the strong consumer response.

“We are very excited about the results and customers’ reaction to it. We’re at a point now where we’re looking to expand and have more locations across the Northeast,” she explained. “The goal for that business is to keep getting closer to the customer. Right now, in Manhattan, we have one location. We’d like to have four or maybe six someday so we can continue to compress the [delivery] time frame and serve the level of demand there really is for that business.”

FreshDirect attracts new customers by providing a top-notch experience and a high quality level, particularly with fresh food, according to McInerney.

“If you’re a customer and we make you happy and delight you with that piece of swordfish or blueberries you got from us, you’re telling somebody else about it. A good percentage of our new customers are coming from word of mouth,” he said. “That’s without marketing. We think it’s essential that we can grow that way.”

“We sell an enormous amount of produce — a shocking amount. Think about what that means: You’re trusting me to pick out your produce for you,” he said. “When people try us for the first time, they’re pleasantly surprised at how good things are.”

Though brick-and-mortar and online grocery competition keeps intensifying in densely populated markets like New York and D.C., FreshDirect thinks its best strategy is to maintain its focus on continuously improving service.

“We are our biggest competitor. We are most critical on ourselves,” said McInernery, who took over as CEO in September after Jason Ackerman stepped down. Ackerman and McInerney helped found the company in 1999 with Joe Fedele, who served as CEO from its launch in 2002 until 2004.

“There are a lot of real specific promises that we make to you as a consumer. You’re expecting to have all the food you want available for sale. You’re expecting to have the time slot that you want available. You’re expecting the order to come on time. And most important, you’re expecting that when you get that bag of food, everything in it is good and there are a couple of items that are even great and are going to knock your socks off,” McInerney said. “Finally, if we do screw something up, we fix it. Our belief is that if we maniacally focus on those five promises to the consumer, we don’t need to spend a whole lot of time thinking about competitors. We just have to think about making things as seamless and frictionless for our customers as we can.”