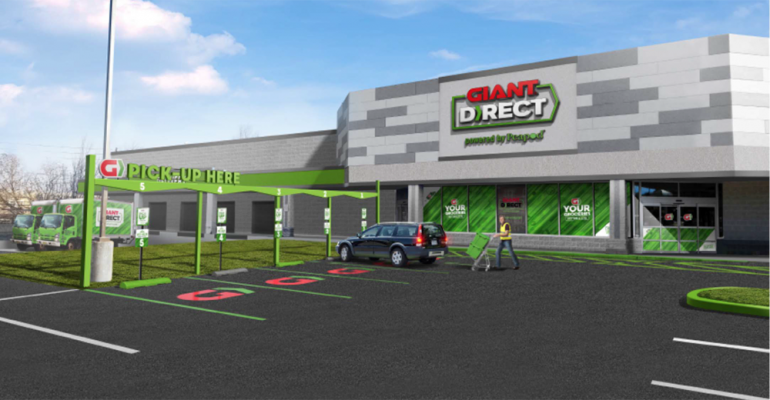 A rendering of the Giant Direct Powered by Peapod site in Lancaster, Pa.
News>Online Retail

The Ahold Delhaize USA supermarket chain plans to open an e-commerce hub branded Giant Direct Powered by Peapod in Lancaster, Pa., on Feb. 12. The 38,000-square-foot facility will provide a pickup venue for customers ordering groceries through the retailer’s Peapod online service and app, as well as via Giant’s website.

“We are excited to make Lancaster the home of our newest innovation with the launch of our new Giant Direct Powered by Peapod e-commerce hub,” Nicholas Bertram, president of Carlisle, Pa.-based Giant, said in a statement Monday. “Not only is the e-commerce hub a completely new concept for us and a first of its kind in our area, it’s the product of a fruitful collaboration with Lancaster Mayor Danene Sorace and local residents to give the Lancaster community the shopping experience they want and need.”

The Giant Direct facility, located at 235 North Reservoir St. in Lancaster, will serve as a curbside pickup site as well as a grocery delivery center. Specially designated “Pick Up Here” parking spaces will enable online customers to drive up and have their orders brought to their cars. The hub also will have a walk-up vestibule for picking up and placing online grocery orders, with the latter accomplished using tablets.

To place an order with Giant Direct, customers use their computer or mobile device to visit the Giant or Peapod websites or the Peapod app, enter their ZIP code and start shopping. Prior to checking out, they will be asked to select whether they would like to receive their order by pickup or delivery.

Giant unveiled plans for the new e-commerce hub in late June as part of a $22 million investment in Lancaster County. The project also included four store remodels, price reductions at the retailer’s eight stores in the county and the opening of a new fuel station at its Lititz store. In announcing the hub, which will add 150 jobs to the local economy, Giant said the facility would allow the chain and Peapod to serve up to 40% more shoppers.

On Monday, Giant said that Giant Direct Powered by Peapod banner, which includes a new, contemporary logo, will replace the current Peapod by Giant branding. Overall, the chain has five e-commerce facilities, with the other four located in Camp Hill, Coopersburg, North Coventry and Willow Grove, Pa.

“Giant Direct Powered by Peapod will allow more loyal Giant customers, starting with our neighbors in Lancaster County, to shop how they want, when they want and where they want — whether in-store, online or at a convenient pickup location,” Bertram added.

The investment in Lancaster builds on a $70 million plan, announced in April, to expand Giant’s store network across Pennsylvania. That initiative calls for six new stores, two store remodels and four new fuel stations over the following two years. In November, Giant also opened a store in Lancaster’s Willow Valley area that was acquired from Darrenkamp’s Markets.

In the 2019 first quarter, Giant is slated to finalize the purchase of five Shop ‘n Save supermarkets from Supervalu Inc. And this past weekend, a new urban store concept called Giant Heirloom Market, sized at 9,500 square feet, made its debut in downtown Philadelphia.