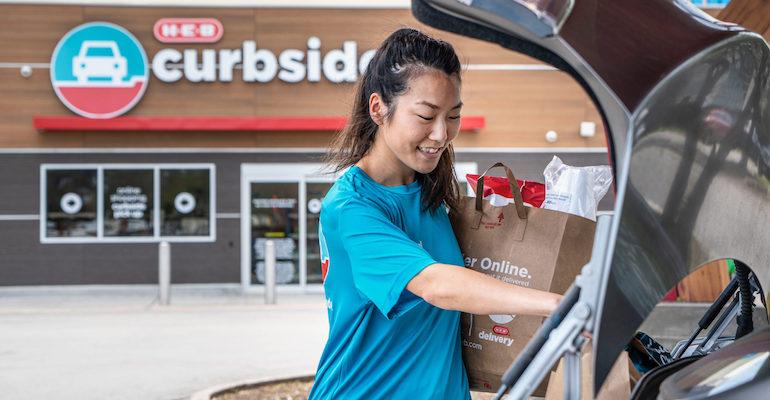 H-E-B
No. 1 H-E-B edged out Amazon and its Amazon Fresh supermarket banner as the highest-ranked e-grocer “in a near statistical tie,” dunnhumby noted.
News>Online Retail

The 2022 dunnhumby eCommerce RPI, released Tuesday, polled 3,000 U.S. households in the $100 billion U.S. grocery market and ranked 54 retailers based on customer preference drivers of owned digital asset usage, ease and reliability, substitutes, products and price, along with a composite score of change in web visits (2019 to 2021) from SimilarWeb, share of wallet online, and online penetration. Households surveyed shopped online for groceries at least once in the previous 30 days. 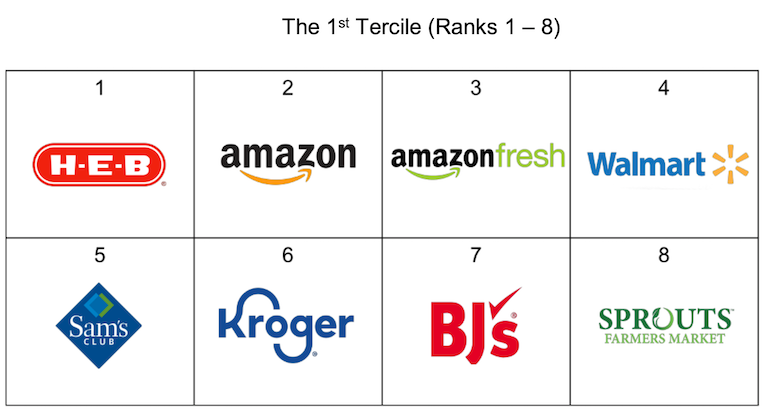 No. 1 H-E-B edged out second- and third-place finishers Amazon and its Amazon Fresh supermarket banner as the highest-ranked e-grocer “in a near statistical tie,” dunnhumby noted. The customer data science specialist said H-E-B generated the highest level of emotional connection and online share of wallet among its customer base out of all the retailers studied. Despite being relatively new to online shopping versus Amazon and Walmart, H-E-B saw its customers shift their spending online the most after the COVID-19 pandemic hit, boosting their e-grocery spending 27% and giving H-E-B the highest share of wallet online.

“H-E-B’s impressive performance proves that it’s possible to compete and win against Amazon when it comes to grocery e-commerce. Their success offers midsize and regional retailers a road map on how to succeed online,” Grant Steadman, president of Chicago-based dunnhumby North America, said in a statement.

“H-E-B’s e-commerce journey goes back to 2015, when they first started with curbside pickup, and they have since built up a powerful online ecosystem,” Steadman observed. “The combination of a simple and easy-to-use shopping experience with a fantastic emotional connection with customers shows how grocers can thrive in this multichannel landscape.”

Walmart and its Sam’s Club warehouse club subsidiary came in at Nos. 4 and 5, respectively, in the eCommerce RPI. Rounding out the top online grocery retailers were Kroger, BJ’s Wholesale Club and Sprouts Farmers Markets, which had the next-highest scores in the RPI as all three chains finished in the top tercile.

Dunnhumby said its consumer survey-informed statistical model aims to predict how retailers execute on the customer needs that matter most for driving e-commerce performance and emotional bonds with online shoppers. The eight top-performing retailers in the study all have “well-established” online grocery capabilities, and most also have scale and size as a key competitive advantage, according to dunnhumby, which noted that scale and size enable more e-commerce investment and yield greater operational efficiencies.

First-tercile retailers also show strength in their own digital assets — instead of relying mostly on intermediaries — and have achieved higher adoption, with three of five customers shopping via these assets during their last online trip, dunnhumby said. That, in turn, likely has given these retailers more control over the customer online experience.

In dunnhumby’s 2022 U.S. Grocery Retailer Preference Index, released in January, Amazon and H-E-B held their places as the No. 1 and No. 2 U.S. grocery retailers. Unlike the eCommerce RPI, the U.S. Grocery RPI ranks price as the most important customer preference driver. Rounding out the top eight grocers in that study were Market Basket, Wegmans Food Markets, Amazon Fresh, Aldi, Trader Joe’s and Sam’s Club.

• Omnichannel shoppers, defined as customers who purchase with a grocery retailer across multiple channels, can be up to 40% of all grocery customers. Thirty-eight percent are ages of 25 to 54, have at least two children and buy online two times per month, with three of every five visits to a retail grocer occurring online. On average, they spend $531 per month across all the stores they shop. Of that, $131 per month — or 25% of their share of wallet — is spent at a single retailer.

• Physical-store-only shoppers account for at least 50% of a grocery retailer’s shopping base. Fifty-seven percent are ages 55 and older and are empty nesters, retirees or both. On average, these shoppers spend $382 per month across all the stores they shop, including $111 (29% of their share of wallet) with one retailer.

“COVID accelerated grocery growth for e-cmmerce, but it may have just brought the grocery sector closer to its e-commerce sales ceiling at a faster rate, rather than raised the height of that ceiling,” dunnhumby stated. “Rising inflation, a subsiding pandemic and increased consumer mobility are putting the brakes on ecommerce growth.”