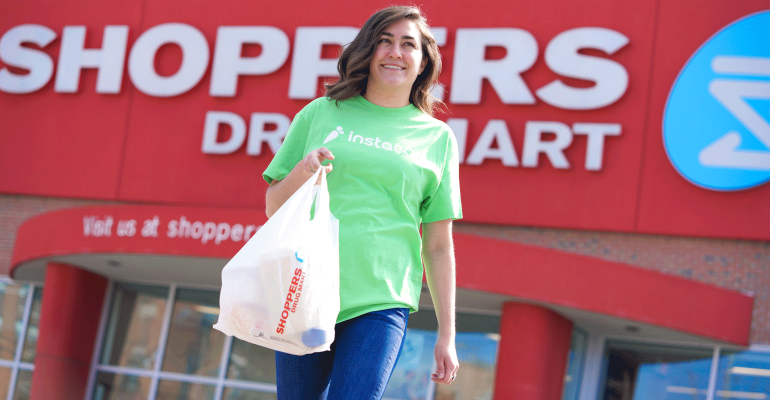 The service covers Shoppers Drug Mart customers in more than 30 communities across the province, including Toronto, Ottawa, Waterloo, Cambridge, Hamilton and London.

"For decades, Shoppers Drug Mart has been a destination for Ontarians for health and beauty products, food staples and general convenient shopping to help them make life a little bit easier," Matt Carr, vice president of merchandising at Shoppers Drug Mart, said in a statement. "Working with Instacart allows us to serve our customers wherever they need us, whether that's in a store or delivered right to their door."

"We're proud to expand our partnership with Loblaw to deliver groceries, household essentials and over-the-counter medications from Shoppers Drug Mart to customers across the greater Toronto area in as fast as an hour," said Andrew Nodes, vice president of retail accounts for San Francisco-based Instacart. "Together, Instacart and Shoppers Drug Mart are helping busy people and families stock their pantries and medicine cabinets with household essentials from a local retailer they love and trust."

To use the service, Shoppers Drug Mart customers go online to instacart.ca/store/shoppers-drug-mart/ or open the Instacart app on their mobile device. They then select their city and store and add products to their virtual cart. Instacart personal shoppers pick, bag and deliver the items within the designated time window, which can be as soon as one hour or up to five days in advance.

Delivery costs $3.99 for orders of $35 or more. Customers also can sign up for Instacart Express membership for $9.99 per month or an annual fee of $99 and get unlimited delivery on all orders over $35. In support of Shoppers Drug Mart’s Instacart launch, first-time users are being offered $15 off their first order of $35 or more if they enter the code “INSTASDM15” at checkout.

Loblaw announced its partnership with Instacart in November 2017 and kicked off delivery from Loblaws, Real and T&T stores in Toronto the following month, which was followed by a launch in the greater Vancouver area in January 2018. Before the launch with Shoppers Drug Mart, Instacart provided same-day grocery delivery for about 250 Loblaw Cos. stores under various banners from British Columbia to Nova Scotia, putting the service within reach of 65% of Canadians.

In addition, Loblaw Cos. customers can order online and pick up from about 700 stores nationwide, including through the PC Express service, available at about 670 grocery and drug stores and GO Transit stations. Loblaw said PC Express pickup is only 10 minutes away from 75% of Canadians.

Loblaw has increased its focus on grocery at Shoppers Drug Mart since closing its acquisition of the Toronto-based chain in March 2014. At the time of the merger, company executives cited the potential opportunities for more food — particularly fresh and private-label items — at Shoppers Drug Mart and Pharmaprix stores.

Last summer, for example, Pharmaprix began piloting a new food concept called Zone Marché in greater Montreal. Depending on the model, the participating stores will carry up to 750 new fresh products, such as fruit and vegetables, deli cheeses and cold cuts, prepackaged fresh meat, artisan bread, desserts and other treats, and convenient meal solutions. And in recent years, Shoppers Drug Mart has remodeled stores to house more space for food and groceries — including grab-and-go items and fresh produce — to help drive store traffic and showcase beauty, health and private-brand offerings in the front end.