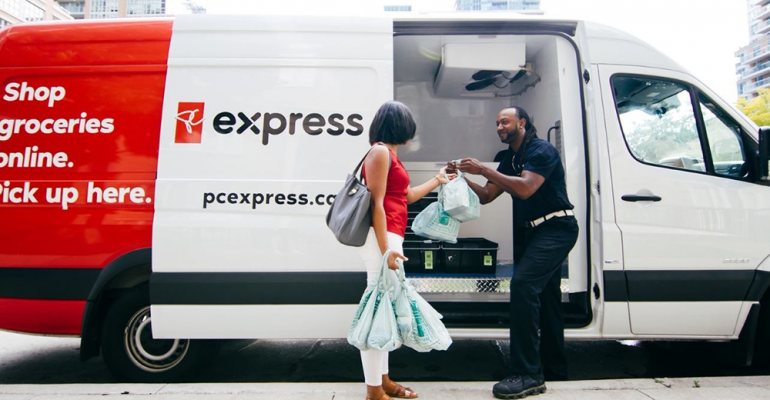 In tandem with the Toronto Transit Commission (TTC), Loblaw Cos. is testing PC Express grocery pickup at three subway stations in the city.

Under the pilot, launched this week, commuters can buy groceries online and then collect their order from TTC’s Finch, High Park and Islington stations on their way home the same evening. The groceries are brought to the pickup sites and distributed to customers from a customized, temperature-controlled PC Express truck.

To use the service, shoppers purchase groceries at PCExpress.ca or via the PC Express mobile app and select one of the three TTC network pickup locations. Orders placed by 11 a.m. will be ready for commuters to pick up between 4 p.m. and 7 p.m. on Monday, Wednesday and Friday. Residents near the High Park station also can order by 9 a.m. Saturday and Sunday for pickup between 2 p.m. and 5 p.m.

Loblaw said PC Express trucks deliver the items to the stations from nearby Real Canadian Superstores. The Brampton, Ontario-based food and drug retailer noted that the service enables consumers to shop for groceries without having to adjust their daily travels.

The TTC pilot builds on another commuter-focused grocery program by Loblaw. Starting in spring 2018, GTA shoppers were able to place PC Express orders and pick them up at six GO Train stations, including Burlington, Bronte, Oakville, Clarkson, Rouge Hill and Whitby. Depending on the location, customers pick up their order from an attendant at a waiting delivery truck or from a self-service, temperature-controlled locker or kiosk. The groceries are supplied by nearby Fortinos or Loblaws stores.

Customers can already order online and pick up from nearly 700 stores nationwide or choose to have their groceries delivered in most major markets. That includes improvements in Loblaw’s online grocery pickup service PC Express, available at about 670 grocery and drugstores and GO Transit stations. Loblaw offers grocery home delivery via Instacart at more than 250 stores under several retail banners from British Columbia to Nova Scotia.

Last year, Loblaw’s e-commerce sales topped $500 million. The company said PC Express pickup is only 10 minutes away from 75% of Canadians and 85% in the greater Toronto area, while home delivery is available to 65% of Canadian households.