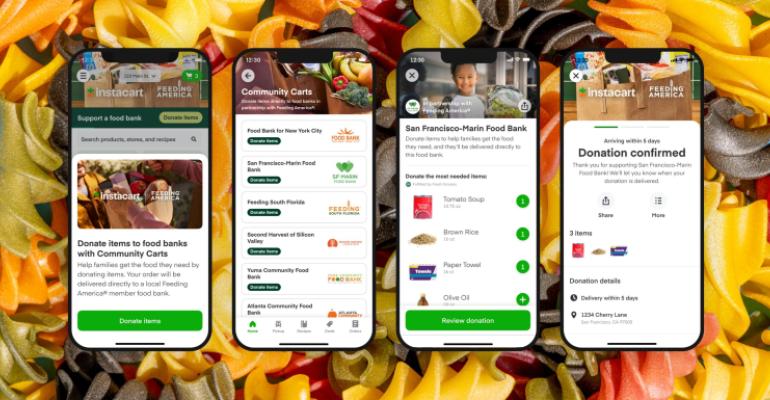 Instacart is making it easier for consumers to donate groceries to food banks during the holiday season via its “Community Carts” initiative.

When shoppers open the app, the option to tap a “Community Carts” banner will pop up a list of participating food banks. After selecting an organization, users can then access a list of items most in need in their local community and then choose the specific groceries for delivery.

The nationwide program will run until Dec. 31.

“One of the most impactful ways Instacart can help fight nutrition insecurity is by using our technology and scale to empower the community for good,” Asha Sharma, Instacart chief operating officer, said in a statement.

The U.S. Department of Agriculture’s Economic Research Service (ERS) reports that 33.8 million persons were living in food insecure households in 2021, in which their lack of money and other resources limits their access to adequate food.

The COVID-19 pandemic, meanwhile, increased food insecurity among families with children and communities of color who already faced hunger at much higher rates than before the pandemic, the ERS stated, noting that many households that experience food insecurity do not qualify for federal nutrition programs and visit their local food banks and other food programs for extra support.

The more than 100 participating food banks in the Instacart initiative are affiliated with Feeding America, the largest charity working to end hunger in the U.S. Feeding America partners with food banks, food pantries and local food programs to bring food to people facing hunger and advocates for policies that create long-term solutions to hunger. Instacart is waiving its delivery and service fees on every donation order and, through Dec. 4, is matching every dollar spent on Community Carts orders with a donation to Feeding America of up to $100,000.

“Over the past four years, Instacart has helped to provide millions of meals to Feeding America member food banks, and we’re proud to continue our partnership with the launch of Community Carts,” Lauren Biedron, Feeding America vice president of corporate partnerships, said in a statement.

The launch of Community Carts builds on Instacart’s health initiative, launched in September and which focused on increasing nutrition security and expanding the role food plays in improving overall health.