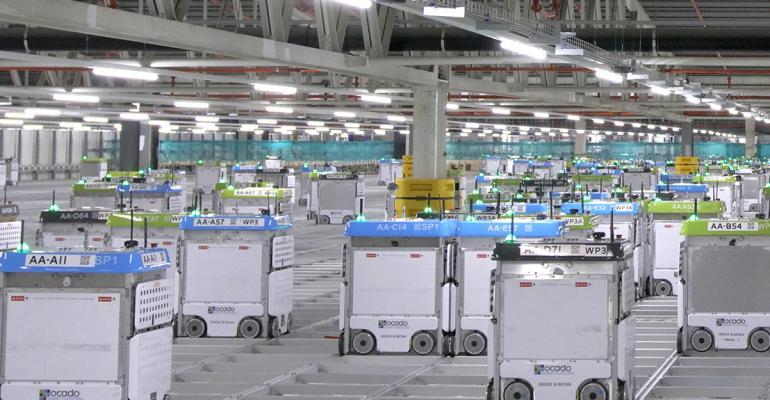 The Kroger Co. named Frederick, Md., as the site for a previously announced Ocado-powered automated warehouse expected to open in about two years.

Kroger said Thursday that the 350,000-square-foot customer fulfillment center (CFC) will be constructed at 7106 Geoffrey Way in Frederick and fill online grocery orders for shoppers in Maryland, Pennsylvania and the District of Columbia. In February 2019, Kroger unveiled plans to build a robotics-driven Ocado CFC in the Mid-Atlantic region but hadn’t specified a location.

The Frederick facility will be one of six Ocado “sheds” announced by the two companies so far. Kroger didn’t give a construction timetable, but plans call for the Maryland location to go into operation 24 months after ground is broken on the site.

Key markets to be served by the Frederick CFC include Baltimore, Philadelphia and Washington, D.C., according to Kroger.

"Kroger is incredibly excited to construct one of our industry-leading customer fulfillment centers in Maryland in relationship with Ocado to bring fresh food to our customers faster than ever before," Robert Clark, senior vice president of supply chain, manufacturing and sourcing at Kroger, said in a statement. "Through our strategic partnership, we are engineering a model for the region, leveraging advanced robotics technology and creative solutions to redefine the customer experience."

The Monroe, Groveland and Forest Park facilities are expected to be up and running in 2021, with the Dallas and Pleasant Prairie sheds slated to become operational in 2022.

Ocado CFCs use digital and robotic technology to service e-grocery orders. When unveiling their partnership in May 2018, Kroger and United Kingdom-based Ocado said they plan to open 20s CFCs in the United States over the next three years. The companies aim to replicate the CFC model as they build the facilities across the country, extending Kroger’s online grocery reach — possibly into new markets where the Cincinnati-based retailer doesn’t have stores. Kroger has said the CFCs cost about $55 million apiece to build and will give customers “anytime, anywhere” ability to place online orders.

"We are excited to bring Kroger and Ocado's latest automated warehouse to Frederick. This site will be key to delivering amazing grocery experiences to households across Maryland, Pennsylvania and the District of Columbia. It will also create fantastic job opportunities for engineers looking to work alongside state-of-the-art robotics and automation," according to Luke Jensen, CEO of Ocado Solutions, which has its U.S. headquarters in Tyson, Va.

"The warehouse will be a key component of the seamless fulfilment ecosystem that Kroger is developing for customers across the United States,” he added. “Ocado's proven technology will allow Kroger to achieve the lowest cost-to-serve in the market, combined with the best freshness, accuracy and service."

As with the other CFCs, the Frederick facility is expected to provide up to 400 jobs when it’s completed, with another 100 jobs to be added later on as the warehouse’s service area expands, Kroger and Ocado said.

"We are thrilled that these two respected companies have chosen Maryland as the location for a new high-tech, innovative Mid-Atlantic hub," Maryland Gov. Larry Hogan stated. "This is a big win for Frederick County and yet another shining example that Maryland truly is open for business."

According to Jan Gardner, county executive for Maryland’s Frederick County, the municipality was able to “fast-track” the Kroger-Ocado project.

"Their high-tech innovative business will bring life to a vacant distribution facility, will add hundreds of new jobs and make an investment of tens of millions of dollars in our community. County staff worked closely with the businesses for many months, facilitating a smooth process for permits, water and sewer, and other details,” Gardner commented. “We are pleased to welcome them to our growing e-commerce business community.”