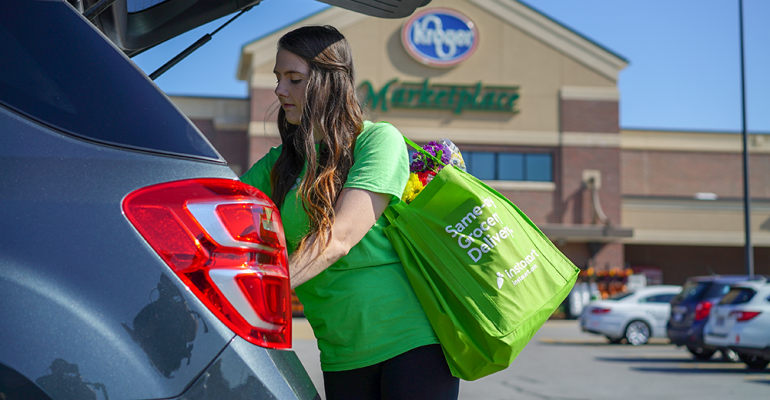 The Kroger Co. is ramping up online grocery delivery coverage through a major expansion of its less than year-old partnership with Instacart.

The companies said Thursday that they plan to bring Instacart same-day delivery to another 500 Kroger Co. supermarkets by late October, which will make the service available at more than 1,600 of the retailer’s stores. With the move, Kroger and Instacart’s household reach will grow by 50%.

Leading off the rollout will be the launch of Instacart delivery today in cities such as Atlanta and Augusta, Ga.; Knoxville, Memphis and Nashville, Tenn.; and Little Rock, Ark. Overall, 75 additional Kroger markets are slated to add the service over the next couple of months.

“We are redefining the customer experience through Restock Kroger by rapidly accelerating our customer coverage area for seamless shopping, giving our shoppers the choice of stores, delivery, curbside pickup or ship to your door,” Matt Thompson, digital vice president of ClickList at Cincinnati-based Kroger, said in a statement. “We value our Instacart partnership, and the expansion is just one more way Kroger is offering millions of our customers across America what they want and when they want it.”

Kroger’s partnership with Instacart began last November with a pilot of the delivery service at select Ralphs Grocery Co. locations in Southern California. The following month, a test of Instacart delivery was launched at most of Kroger’s QFC stores in Washington’s Puget Sound and in Portland, Ore.

This past March, Kroger and Instacart launched a significant expansion of the partnership that brought the service to hundreds more stores. At the time, Kroger said it offered home delivery from 872 stores in 45 markets nationwide, while 1,091 stores provided curbside pickup via its ClickList service, which is slated to add 500 new locations this year.

Kroger recently unveiled other home delivery options as well. Earlier this month, the company launched its own online grocery delivery service, Kroger Ship. The direct-to-consumer e-commerce platform enables consumers to order from a selection of groceries at ship.kroger.com and have them delivered to their door. Also this month, Kroger kicked off a pilot of driverless delivery vehicles in Arizona with technology partner Nuro.

Kroger Co. customers can shop for the same-day grocery delivery at delivery.kroger.com or their store banner’s website.

“Kroger and its family of stores have long offered a superior combination of quality and variety. With this coast-to-coast partnership expansion, we’re proud to now power same-day delivery to more Kroger households than ever before,” stated Sarah Mastrorocco, vice president of business development at San Francisco-based Instacart. “From Atlanta to Anchorage to Albuquerque, Instacart is excited to welcome and offer additional Kroger households on-demand access to their favorite products and household staples.”

Besides Kroger, Instacart has signed new partnerships with other top North American grocery retailers in the past year, such as Albertsons Cos., Aldi, Sam’s Club and Loblaw Cos. Overall, the online grocery marketplace and delivery provider has more than 300 retail partners, including regional and local supermarket chains. Its service is available at 15,000 stores in the United States and Canada and reaches over 4,000 cities and covers 70% of all households.

Earlier this year, chief business officer Nilam Ganenthiran told Supermarket News in an interview that Instacart aims to serve more than 80% of households in North America by the end of 2018.