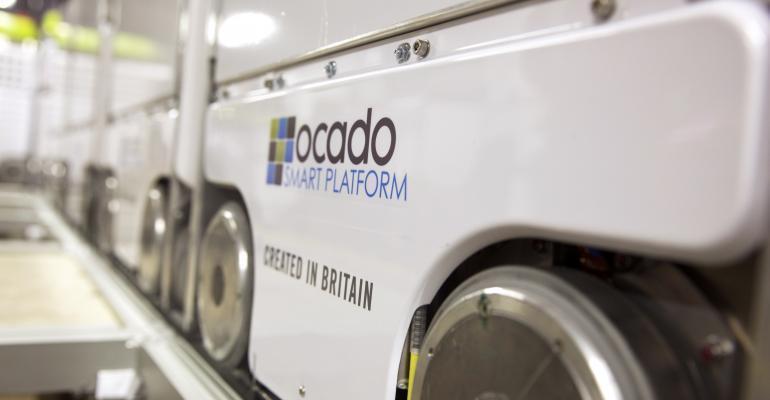 Kroger/Ocado
So far, Kroger has announced plans for nine customer fulfillment centers, with the first slated to open in Monroe, Ohio, in early 2021.
News>Online Retail

Kroger didn’t yet disclose the specific locations of the robotics-driven customer fulfillment centers (CFCs), which will fill online grocery orders in their respective regions. So far, the Cincinnati-based supermarket giant has announced plans for nine CFCs, with the first slated to open in Monroe, Ohio, in early 2021.

“Kroger is incredibly excited to construct three additional industry-leading customer fulfillment centers across the country in relationship with Ocado to bring fresh food to our customers more conveniently than ever before,” Robert Clark, senior vice president of supply chain, manufacturing and sourcing at Kroger, said in a statement. “Through our strategic partnership, we are engineering a model for these regions, leveraging advanced robotics technology and creative solutions to redefine the customer experience.”

Most recently, in January, Kroger announced that a 350,000-square-foot CFC will be built in Frederick, Md., to serve online customers in Maryland, Pennsylvania and the District of Columbia, including the Baltimore, Philadelphia and Washington, D.C., metropolitan markets.

“Kroger and Ocado are building an e-commerce ecosystem across the U.S. that will deliver unrivalled online experiences to more customers, in more ways and in more markets,” stated Luke Jensen, CEO of Ocado Solutions, which has its U.S. headquarters in Tyson, Va. “Spanning a range of automated CFC sizes, these three new sites will be key parts of this growing and flexible fulfillment network. Alongside the scale and wider benefits of larger CFCs, smaller-format and mini CFCs will allow Kroger to reach more geographies with Ocado’s automation, while also catering to a wide range of options for delivery.”

Dubbed as “sheds,” the Ocado CFCs use automation and artificial intelligence (AI) to service e-grocery orders. When announcing their partnership in May 2018, Kroger and United Kingdom-based Ocado said they plan to open 20s CFCs in the United States over the next three years.

The companies aim to replicate the CFC model as they build the facilities across the country, extending Kroger’s online grocery reach — possibly into new markets where it doesn’t have brick-and-mortar stores. Kroger has said the CFCs cost about $55 million apiece to build and will give customers “anytime, anywhere” ability to place online orders.

Kroger didn’t specify opening timetables for the three new CFCs or the Frederick facility. The Monroe, Groveland and Forest Park CFCs are expected to be up and running in 2021, and the Dallas and Pleasant Prairie sheds are slated to become operational in 2022. Kroger has said the automated warehouses go into operation 24 months after ground is broken on the site.