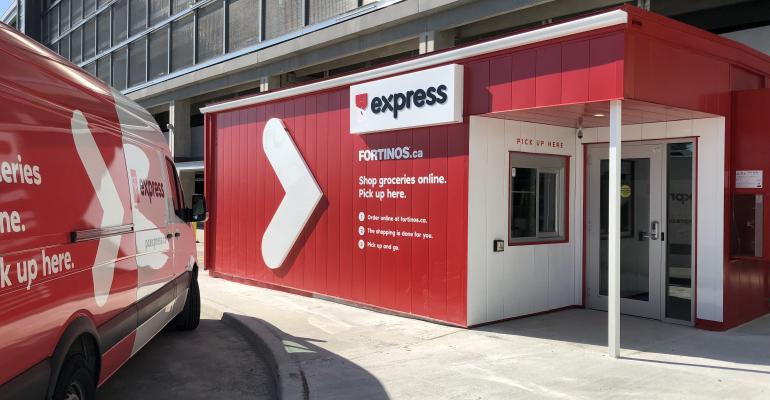 Loblaw Cos. plans to pilot an automated warehouse inside a Toronto store to fulfill online grocery orders for its PC Express pickup service.

Under a partnership with Takeoff Technologies, construction of a micro-fulfillment center (MFC) has begun at one of Loblaw’s Real Canadian Superstore locations in greater Toronto. Plans call for the 12,000-square-foot, robotics-driven picking facility to become operational in 2020, Loblaw said Wednesday.

The technology will be able to fill PC Express orders from stores “within close proximity” to the automated picking facility, according to the companies. Loblaw currently operates 700 PC Express pickup sites, including in grocery and drug stores as well as at transit stations.

“This new technology complements the exceptional service of our PC Express colleagues and leverages the strength of our retail store network,” Sharon Lansing, vice president and general manager of grocery e-commerce at Loblaw, said in a statement. “By increasing the speed and accuracy of our PC Express pickup service, we can ensure our PC Express customers have a seamless and outstanding experience every time they order. We can fill more orders, more quickly, with a near guarantee that the products customers order online will be in stock at the store.”

When a PC Express order is received at the Takeoff-powered facility, it may be split between automated picking and manual picking, depending on the products requested, according to Loblaw. So instead of Loblaw associates having to walk the store to pick the ordered groceries, the automated facility brings the items directly to an associate to pick and pack. Once complete, the order goes to a staging area, where another Loblaw associate reviews the order and stores it in a frozen, chilled or room temperature zone. The order then combined with in-store picked items, if necessary. Once customers arrive, their order is brought out to their car.

“We continue to enhance PC Express processes, like our picking app, to increase efficiency, accuracy and job satisfaction of our in-store team,” Loblaw President Sarah Ruth Davis said in a conference call Wednesday on third-quarter financial results. “We are now building an in-store, automated picking area that turns 12,000 square feet of less productive space into a high-tech order fulfillment area dedicated to PC Express orders. This pilot will automate pickup for the highest-velocity items, helping our in-store teams build more orders faster and more efficiently, right in your own neighborhood.”

Davis said Western Canada actually has the highest penetration for PC Express, and Loblaw remodeled seven stores in the region to accommodate increased online order volume. She noted that the automated facility in Toronto will be a test project for the company.

“We don't know exactly what that could turn into. But you could imagine it being in a few stores, and it would be a hub that would allow some of the other stores to not have that and have the picking done in the store,” Davis explained. “So I would say that's what we're piloting, but it's too early to tell exactly what we're going to do going forward.”

Acting as a hub, Takeoff’s MFCs are designed to provide a lower cost-to-serve by covering the expense of order assembly and last-mile delivery/pickup. The artificial intelligence-enabled robots can assemble grocery orders of up to 60 items in less than five minutes, a fraction of the speed and cost of current manual-picking options.

“We are very excited about our partnership with Loblaw. Our proprietary solution will allow them to make significant improvements to their service at a hyperlocal store level,” commented Jose Vicente Aguerrevere, co-founder and CEO of Waltham, Mass-based Takeoff Technologies. 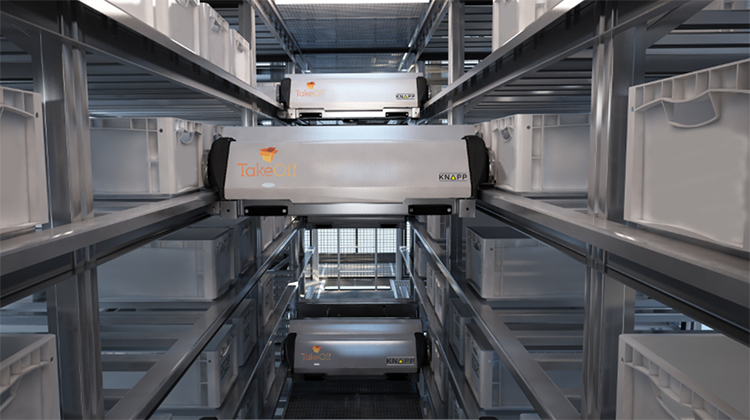 Overall, the robotics in a Takeoff MFC can pick about 800 items per hour versus 60 items for manual in-store picking, and the system can process approximately 3,500 online grocery orders weekly week per location for a two-hour service. For the robotics technology, Takeoff has an exclusive agreement with Knapp, a global provider of automated warehouse solutions. It takes about three months to get an MFC up and running from the start of construction.

“We provide a turnkey solution that enables grocery chains to skip the typically lengthy and painful process of installing a large, automated warehousing facility, with even better results,” stated Max Pedro, co-founder and president of Takeoff.

Loblaw rival Sobeys Inc., meanwhile, is moving ahead with a centralized fulfillment model for its Voilà online grocery service through its partnership with United Kingdom-based e-grocer Ocado Group plc. Plans call for the Voilà by Sobeys service to get under way in the greater Toronto area in spring 2020, when its customer fulfillment center (CFC) in Vaughan, Ontario, begins operation. Next up in 2021 will be Voilà par IGA, a delivery service in Ottawa and major cities in Quebec that will be served by a second CFC to be built in Pointe-Claire, Montreal. Both services and CFCs will be powered by Ocado’s Smart online grocery platform.