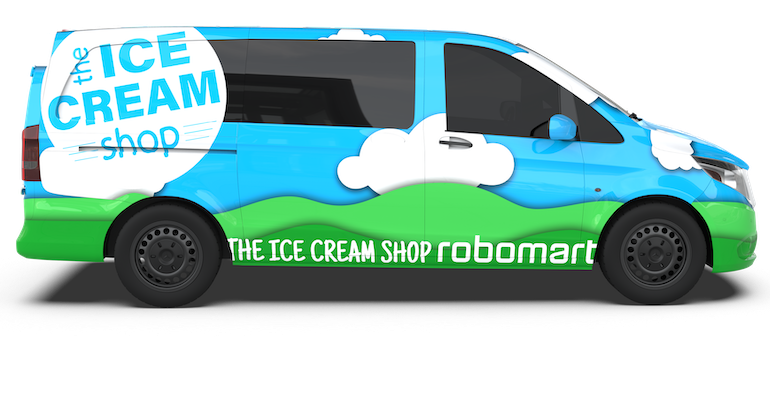 Robomart
The Ice Cream Robomart (see rendering above) will enable consumers to use an app to summon a vehicle housing an automated store and have it arrive in minutes at their location.
News>Online Retail

Automated “store on wheels” platform Robomart has partnered with CPG giant Unilever to deploy a fleet of robotic vehicles for ice cream delivery this summer.

Related: Robomart ‘store on wheels’ gets under way

Described as a “store-hailing platform,” Robomart’s technology enables consumers to use an app to summon a vehicle housing an automated store and have it arrive in less than 10 minutes at their location, where they choose from a selection of products. Unilever’s Ice Cream Shop allows customers to use major food delivery apps like Doordash, UberEats, GrubHub and Postmates to order from a selection of Unilever ice cream brands. The company said The Ice Cream Shop is available in most major metro areas — including New York, Los Angeles, San Francisco, Seattle, Baltimore, Philadelphia, Chicago, Boston, South Florida and Washington, D.C. — and continues to expand.

“We’re excited to work with Unilever — the world’s largest ice cream maker — to pilot The Ice Cream Shop as one of the flagship storefronts on our new marketplace,” Robomart CEO and co-founder Ali Ahmed said in a statement. “Putting a spin on the classic ice cream truck by bringing it to consumers on demand, we have pioneered a new way for everyone to get their favorite ice cream treats in as little as two minutes. This rollout brings to life the original vision my co-founder and I had over a decade ago while working at Unilever to create ‘The Everywhere Store,’ the fastest and most accessible way to get all your essentials.” 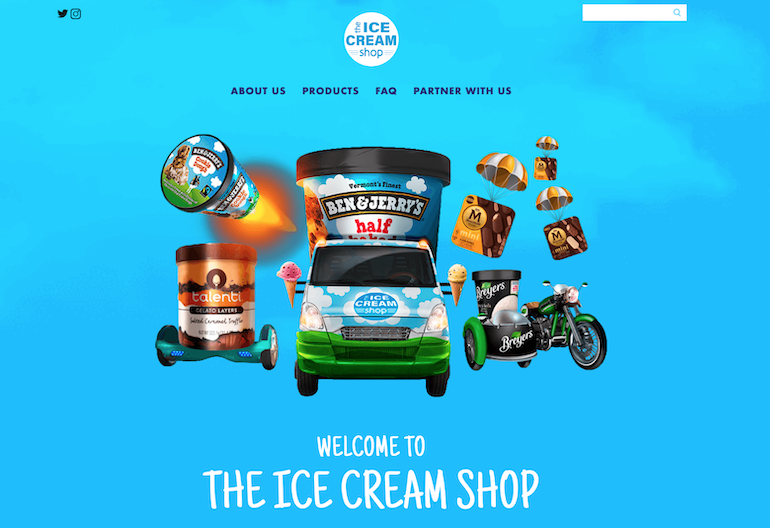 The mobile mini-marts will carry ice cream and novelties from brands such as Ben & Jerry’s, Breyers, Good Humor, Magnum and Talenti available through Unilever’s “The Ice Cream Shop” virtual storefront.

Consumers hail The Ice Cream Shop Robomarts to their location using Robomart’s proprietary mobile app and patented one-tap grocery ordering technology. When the vehicle arrives, customers swipe across the app to open the vehicle’s door. The Robomart then lets users handpick their selected products and walk away without physically checking out or swiping a credit card.

Robomart noted that its platform stands out in the online delivery realm by bringing the store directly to homes, eliminating the need for consumers to shop on a website, fill a basket, check out with a credit card, select a delivery window and communicate with delivery staff.

“We’re thrilled to partner with Robomart to offer a new way to bring our virtual store, The Ice Cream Shop, to fans in Los Angeles in an innovative way,” commented Russel Lilly, general manager for Unilever North American Ice Cream. “Our pilot program with Robomart is revolutionizing ice cream delivery for consumers and making it even faster to get our beloved brands to our ice cream fans. What better way to shop for your favorite ice cream than just a few steps from your front door?”

Robomart made its commercial debut last June with the launch of on-demand pharmacy and snacks autonomous mini-marts in West Hollywood, Calif. The company said it recorded its fastest end-to-end experience — from the time a consumer opens the app to the time they have goods in hand — at under two minutes. Active users, on average, hail a vehicle to their location 2.3 times a week, Robomart said, adding that the company has seen 9% user growth and 10% order growth weekly as it has gained market share.

The Pharmacy Robomart offers health and personal care items such as shampoo, hand sanitizer and ibuprofen, while the Snacks Robomart serves up chocolate, chips, soft drinks and other ready-to-eat snack items. Slated to debut in the coming months, the company said, is a Grocery Robomart offering fresh produce and refrigerated products as well as Deli (meals) and Café (coffee and doughnuts) Robomarts.

Currently, Robomart’s vehicles include human drivers, but plans call for the company to add self-driving vehicles as it fine-tunes the autonomous technology and as local regulations permit. Ahmed has indicated that Robomart is open to partnerships with grocery chains, which would lease the vehicles and stock them. In early 2019, Northeastern grocer Stop & Shop announced a pilot of Robomart’s autonomous vehicle in Boston.