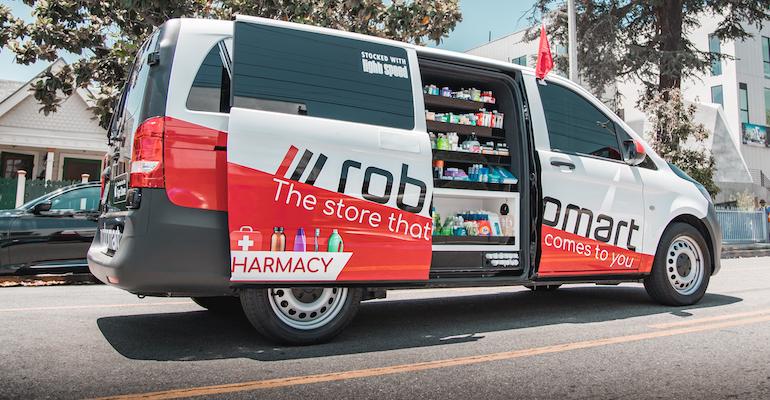 Robomart ‘store on wheels’ gets under way

Commercial launch of mobile mini-mart to expand into groceries

Automated “store on wheels” platform Robomart has launched on-demand pharmacy and snacks mobile mini-marts in West Hollywood, Calif., and has a grocery offering next on its list.

Santa Monica, Calif.-based Robomart said Monday that the rollout marks its commercial debut following a pilot in West Hollywood that wrapped up in December. Similar to ride-sharing services, Robomart enables consumers to use an app to hail a vehicle housing an automated store and have it arrive at their location in less than 10 minutes, where they choose from a selection of products.

Two Robomarts premiered with today’s launch: a Pharmacy Robomart offering health and personal care items such as shampoo, hand sanitizer and ibuprofen, and a ready-to-eat Snacks Robomart featuring chocolates, chips, soft drinks and other snack items. Next up in the coming months will be a Grocery Robomart — offering fresh produce and refrigerated products — as well as Pantry (dry groceries), Deli (meals) and Café (coffee and doughnuts) Robomarts.

“We’ve launched two different Robomart types: The Snacks Robomart, which carries a selection of candies, chocolates, chips and ice cold drinks, and the Pharmacy Robomart, which carries OTC medicines, household goods, and personal care and grooming items,” said Ali Ahmed, who founded Robomart with Emad Rahim and Tigran Shahverdyan in 2017. “We rolled them out in West Hollywood for now, and it serves all of West Hollywood, which is larger than what Google Maps shows. If you go into the app, you’ll be able to see the entire border of the operating zone, which right now covers roughly a five-square-mile area.”

Related: Robomart, the self-driving market, wants to work with retailers 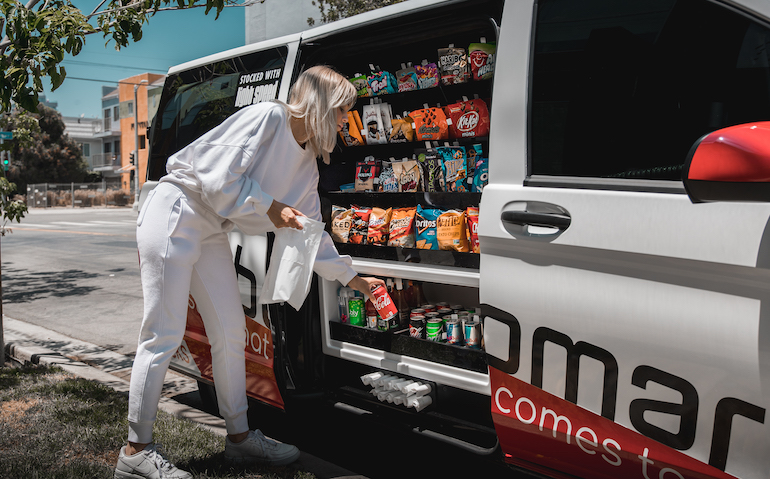 Customers view available items via the app and take the products they want when the Robomart arrives, with no checkout required.

Through a partnership, Miami-based REEF Technology, North America’s largest operator of mobility and logistics hubs and neighborhood kitchens, manages product stocking, tagging, scanning, integrity and replenishment of the Robomart automated stores. Currently, Robomart’s vehicles have human drivers, but plans call for the company to add self-driving vehicles as it fine-tunes the autonomous technology and as local regulations permit.

“The Robomarts right now are driven. So they’re not driverless, but the experience of the consumer is fully automated. They don’t interact with the driver, the windows are tinted and they don’t tip. They simply hail the store through the app and get a fully automated, checkout-free shopping experience when it arrives,” Ahmed explained. “We built the prototype in 2019 that you might have seen online. Our plan is that, as regulations allow, we will start introducing more driverless vehicles into our fleet.

“But what’s really exciting is the entire experience that we’ve created for customers,” he noted. “Automated store hailing is unlike anything that they’ve ever experienced. It’s tap a button, get a store in four to five minutes, and get whatever you need.” 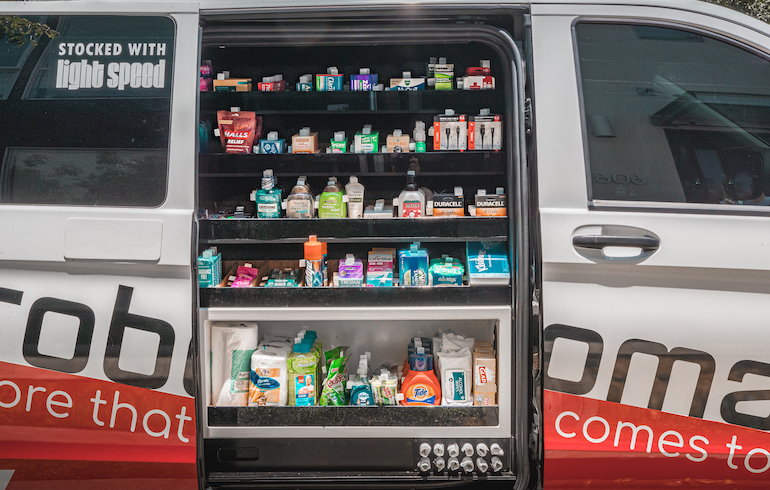 The Pharmacy Robomart carries an assortment of OTC health and personal care items as well as grooming products.

Robomart works as follows: Consumers download the Robomart app (currently available for iOS, with an Android version coming soon), set up an account and then begin shopping. The app displays the types of Robomarts available — pharmacy, snacks and, soon, grocery, pantry, deli and café — and once consumers make a selection they see a menu of available products. From there, they click on “hail now,” and the Robomart is assigned.

Within about five minutes, the Robomart pulls up to the customer’s destination and sends an arrival alert. The customer comes out, unlocks the vehicle’s door with the app and the door opens automatically. Next, the shopper takes the desired items and then closes the door via the app. The automated store tallies the products taken and, within a few minutes, provides a receipt and charges the payment card on file with the app.

“With Robomart, you’re not creating a basket. You’re not wasting time like you would on grocery delivery apps, which can sometimes take 40 to 50 minutes. Yesterday, I heard from someone who said it took an hour-and-a-half to create a basket. Robomart does away with that whole process,” Ahmed said.

In addition, the solution eliminates out-of-stock and product selection errors because the app lets users view a list of all available products in the Robomart app before hailing the vehicle, and then they hand-pick their items when the Robomart arrives.

“You grab whatever products you want,” said Ahmed. “You’re not scanning anything. You’re not taking out your card. It’s fully automated. And we track everything that comes out of the Robomart.”

The quickest Robomart performance during the test period in West Hollywood was four minutes, according to Ahmed.

“In December, we launched our beta trial with the Pharmacy Robomart. It was very timely because of the pandemic. We wanted to offer customers regular pharmacy fare during that time, and we had an amazing response. People absolutely loved the proposition, the speed of it. Our fastest engagement was four minutes — not just drive time, but everything from start to finish. And we’ve had multiple orders in four minutes,” he said.

“Once we did the Pharmacy Robomart, we realized that we want to expand. Snacks was a natural progression because it allowed us to test the refrigeration system, make sure everything is working and then introduce groceries. The Snacks Robomart keeps the temperature at 35 degrees. It is incredibly cold in there. You get ice cold drinks,” Ahmed explained. “And now we’re going to be rolling out the Grocery Robomart with a selection of fruit, vegetables, milk, bread, eggs — all of the perishable goods that you would need.” 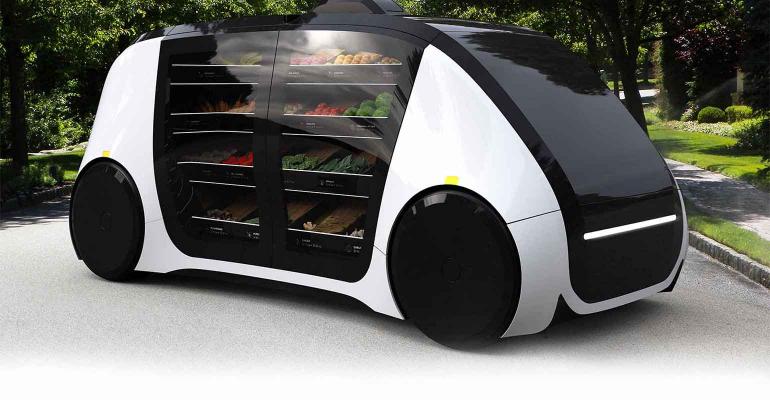 Robomart plans to introduce its driverless vehicle to its fleet as the autonomous technology is fine-tuned and local regulations allow.

The Grocery Robomart vehicle will house multiple temperature zones, with a cold box on the lower shelf set at just above freezing and ambient temperatures on the upper shelves depending on the products stocked, including items like heat-and-eat foods. Shelves can be set to whatever temperature needed, Ahmed said, although frozen foods aren’t be accommodated at this time.

REEF will serve as the partner for stocking and replenishing the Grocery Robomart. “They have their grocery division called Lightspeed and are the first merchant on our platform,” Ahmed said.

The planned Pantry Robomart will carry an assortment of dry groceries, such as pasta, sauce, rice, etc. With more of a meal focus, the Deli Robomart will offer a menu of prepared foods like sandwiches, salads and soups, while the Café Robomart will provide coffee, doughnuts and baked goods.

“The overarching structure is that we’re a ‘supermarket on wheels’ that comes to you on demand, and it’s the first of its kind,” Ahmed said. “That’s how we kind of think about the different aisles of the supermarket and the different Robomart types.”

Robomart also is open to partnerships with grocery chains, who would lease the vehicles and stock them, according to Ahmed. In early 2019, Northeastern grocer Stop & Shop announced a pilot of Robomart’s autonomous vehicle in Boston.

“The way that we operate is we don’t own the inventory. We have merchant partners that sell their products through Robomarts, and that’s how we set up that model and partnership,” Ahmed said. “Right now, we’re very happy and excited about the partnership with REEF. We can scale up that partnership, but we’re very much open to partnering with larger supermarket chains as well. So let’s see how things roll out and how those conversations take shape. But our model is to operate the Robomarts and allow retailers to sell their goods through our channel.”

Startup Robomart introduced its technology in January 2018 at the Consumer Electronics Show, showcasing its self-driving vehicle. Besides REEF, Robomart partners with Zeeba as its vehicle fleet supplier and with Zebra Technologies and Avery Dennison for support of Robomart’s proprietary RFID tracking technology.

“Robomart is a fantastic partner who will help REEF further connect customers and neighborhoods with greater accessibility, consistency and efficiency to the most in-demand goods and services,” Philippe Saint-Just, co-founder of REEF, said in a statement. “Together, we are redefining proximity as a service with our last-block fulfillment infrastructure.”